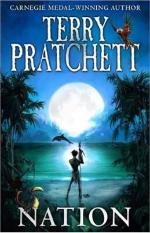 In an alternate Earth, around the time of the early part of the 19th century, a boy named Mau is left on a small island in the Great Pelagic Ocean (sort of the south Pacific) to become a man. His task is to live alone for a week, build a boat out of nothing more than the materials found on the island, and row himself home. Once he arrives home, he will become a man.

It’s a task that he nervously awaits. He’s terrified at the prospect of being alone and not being able to build a boat by hand… until he sees an axe that has been lodged in the base of a tree, next to the message: “Men help other men.” Relief sets in as he realizes that coming of age may not be so difficult with the love and support of his close knit Nation.

But rowing back home a week later, there is a distant explosion, and the horizon behind him turns an ominous orange. A gigantic wave sweeps beneath him, almost swamping his boat. When he makes it back to his island Nation, his worst fears are confirmed: all of his people, who were standing on the beach awaiting his return, his village — his entire way of life — have been swept away by the tsunami. He is the only survivor.

The wave has brought something else to the Nation, however: a sailing ship swept far inland, all the crew killed, except for a girl aged thirteen, unfortunately named Ermintrude, who thanks to a disaster at home might just be the heir to the throne of England. Lost and alone, she too is terrified to be at the mercy of the elements — not to mention the area’s “savages”.

Mau is essentially chief, now, and his first thankless task is to bury all the bodies. But he likens himself to a hermit crab, who has shed his “boy” shell, only to find that his “man” shell is nowhere to be found. Is he easy pickings for whatever predators might come his way? He hears the voices of the island’s “grandfathers” telling him to uphold the traditions of the Nation, and to serve them beer, and he cannot help but rebel. What’s the point, he demands, when all has been swept away? Is there a point? And, surprisingly enough, there is; just not the point he’d come to just accept as a boy.

Terry Pratchett’s Nation is a startling book. While it maintains his style, his touches of humour, his ease of characterization, it completely defies your expectations if you’re entering into it aware of his pedigree as the creator of the Discworld series of humorous fantasy novels. The book plays with all of the fun literary possibilities of a boy and a girl, with different cultural backgrounds, different skin colours and even different languages learning to understand each other, but the book also offers much more. While novels such as Night Watch offer up a similar depth of character, and Small Gods asks compelling questions about life, God and tradition, Nation takes these elements much farther in Pratchett’s usual irreverent but even-handed way. Traditions are shown to be both silly and valuable, and Mau and Ermintrude (who quickly takes on the name Daphne) comes of age in a way that triumphs over other coming-of-age novels, because the insight is deeper, the challenges are harder, and the victory more bittersweet.

It’s at times a hard book to read, especially when Mau alone has to clean up after the tsunami and dispose of the bodies of his fellow villagers, but the tale is so compelling, it’s almost impossible to look away. Despair changes to hope and determination as Mau and Daphne set about rebuilding the Nation, taking in other refugees from the tsunami. This book is about a young man and woman in adversity rising far beyond the bounds of their traditions, oftentimes by coming to understand the values those traditions were based upon in the first place. It’s a simple premise, but one with considerable depth.

The story isn’t perfect, though it’s close. The structure suffers somewhat as Daphne’s backstory makes a reappearance. The evil, mutinous sailors, expelled from Daphne’s ship before the tsunami hit, come to threaten the rebuilding Nation, and they could have been given a bit more foreshadowing so that they don’t just appear to materialize at the author’s behest. This is the only real false note of this book. Mau’s struggles and triumphs, coupled with Daphne’s struggles and triumphs, make it a joy to read. It is, quite possibly, Pratchett’s best book, and certainly one of the best books of the year.

If you have been avoiding Pratchett’s books because you’re daunted by the breadth of titles available in the Discworld series, then you need to read this novel. You will come to respect Pratchett, alone, as an author, and I hope that will lead you onto his other works. You will see that he is too good a writer to be ignored.