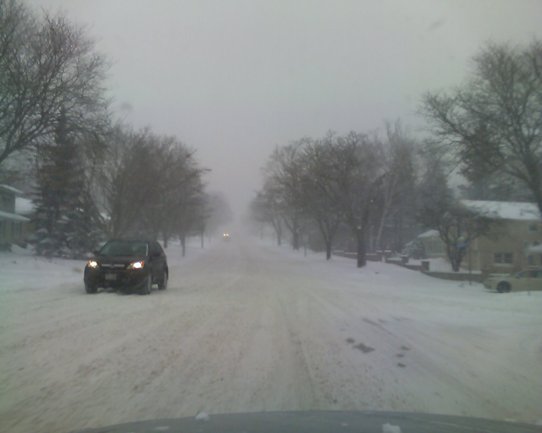 It was not fun driving today, let me assure you. This shot was snapped on Westmount Road on the way up to the University of Waterloo. About the only good thing about this day is that it seemed as though a lot of people heeded the warnings to stay home, and traffic was light — at least, in Kitchener-Waterloo. The University stayed open early in the day, but then shut down around noon, as did a number of other stores, even a medical clinic and pharmacy.

As bad as this storm was, it was hardly “snowmaggedon”, which is an assault on all that is good and decent in the English language. Shame on Environment Canada for coining that term! Shame!

And it wasn’t really accurate, either. Unless this storm is followed up by others (and it might be), it pales in comparison to the hijinks of the Storm of ‘99, when we actually had more than a foot of snow fall within a 24 hour period. Though Mel Lastman was pilloried for his reaction (saying “I’m terrified!” on national television and calling in the army), it wasn’t unjustified. Compared to that storm, this Friday’s was an (annoying) walk in the park.

The sun even decided to show itself this afternoon before it set, which made the walk to the pharmacy (the closed one I mentioned before) a beautiful but cold experience.

Tomorrow is a travel day. We’re flying to Des Moines to spend Christmas with the in-laws. And, with luck, we’ll have caught the lull in the storm just right to have a fairly uneventful day, weatherwise (unlike other poor saps who had to fly out today). Still, it should be an interesting time all round. Wish us luck. We’ll let you know when we’re in Des Moines. 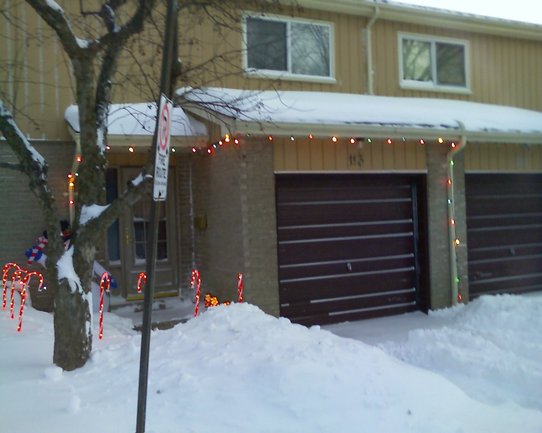