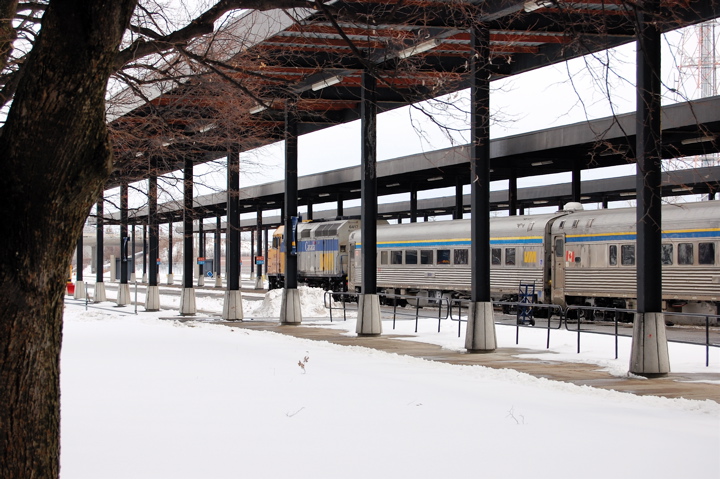 I’m typing this in the pre-boarding area in the bowels of Toronto’s Union Station, where I’ve been allowed to sit thanks to VIA Rail’s very humane and complimentary service of giving anybody travelling with a young kid pre-boarding status. Not too shabby. The trip so far has been uneventful, with the train arriving and departing from Kitchener twenty minutes late, but with service otherwise being exemplary, with plenty of leg room.

Yes, Vivian is travelling with me. Erin has work to bring home this weekend, and it seemed only fair that she not have to deal with that and two kids while I gallivanted about Ottawa for my trip. And despite the fact that I’d now doubled my luggage requirements, I found myself warming to the idea rapidly. The fact that we were taking the train helped immensely. This would be a perfect chance to bond.

The first train trip I can remember occurred when I was in grade one, when my father had to spend a weekend attending the Ontario Librarians Association conference in London (representing, I believe, the Ontario Ministry of Culture and Communications) and we were to meet them there. I hadn’t known that we were going. I only remember emerging from my school to see my mother waiting at the gate, with my toy suitcase (really a plastic lunchbox — which, strangely enough, I still own today) packed with my toys. “We’re going to take the train,” she said.

It was a strange and wonderful adventure, going to Union Station, boarding the train, and then barrelling out of the city. I recognized that we were passing Port Credit, and I recall seeing the Dundas watertower in the distance. It probably turned me into a train fanatic for life.

Today, I have a couple of episodes of Dora the Explorer on the iPod to keep Vivian’s attention when her strength flags, but she’s also enjoyed looking out the window too. Still, it’s another five hours to Ottawa. A test for any young traveller, though Vivian is a trooper.

The above photograph is entitled Budd Cars at Ottawa and is by Jonathan Crowe. It is used in accordance to his Creative Commons license.