Busy here. I have two web assignments that need doing, and I’ve managed to go to the gym twice so far this week. I’m hopeful that I’ll make it three times a week tomorrow. We’ll see. Expect slower posting on this blog as I prepare for the Toronto and Waterloo launch parties for The Young City. In the meantime, I do have a book review. Be warned that spoilers follow. 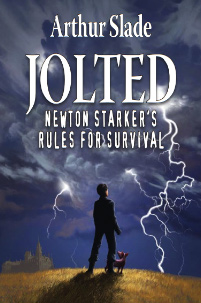 In Arthur Slade’s Jolted, fourteen-year-old Newton Starker has good reason to believe that his family is cursed. Throughout history, going back to at least the 18th century, every member of the Starker family has died from being struck by lightning, including his mother. Of all of his Starker relatives, the only other person who hasn’t died is his noxious 102-year-old great-grandmother Enid, who wiles away her time in a Moose Jaw old age home, surviving out of spite.

And Newton really has great difficulty thinking of what to make of this. There seems to be no alien or supernatural force out to get him — other than maybe God himself. Scientists have looked carefully at the Starker clan and can find no earthly reason for this extreme stroke of bad luck. Which, after the tragic death of his mother, leaves Newton with the hard task of getting on with his life, albeit constantly checking the weather before he goes outside.

To defy the elements, and to give himself what he sees as the best education possible to ensure his survival, Newton — a native of Shohomish, Washington — convinces his father (not a Starker) to enrol him at the Jerry Potts Academy of Higher Learning and Survival in Moose Jaw, Saskatchewan, a school where the students wear kilts and where cooking classes include how to serve roadkill and other found meat — precisely the sort of place to make a man (or a woman) out of you. Newton intends to turn himself into stone, metaphorically, so he can beat the weather and survive — possibly on spite like his great-grandmother Enid. He doesn’t count on making friends, or even enemies, but his passionate character and at-times fiery anger cannot help but do this.

Newton is an excellent character, well written. Slade ably conveys the boy’s depths, from his angry defences, to his love of truffles and other fine cuisine, to the scared young man beneath angry at the lot fate has dealt him. The friendship Newton builds with Jacob and the chemistry between him and his nemesis Violet are wonderfully described. Especially interesting is Newton’s great-grandmother Enid, who seems like a bitter old woman until the very last minute, when she takes a step that throws her character into a completely different light. Arthur Slade brings all of this to life with a casual narrative style that feels light and is often funny, and keeps the reader reading. The story is intercut with notes from Newton’s rules of survival, pages from the survival manual of the Jerry Potts academy, and notes about Newton’s past, which shakes up the narrative enough to be interesting, but not so much as to be annoying.

But Jolted is a hard novel to categorize. It revels in its quirkiness and its contradictions, and indeed, I think that’s what the story is about. Arthur Slade is one of Canada’s most accomplished authors of young adult literature. His novel, [Dust], won many awards, including the Governor General’s Award for Children’s Literature in 2001. It is a story about disappearing children and the promise of rain in the dust bowls of the prairies. Another tale by Mr. Slade is Megiddo’s Shadow, an inspiring story about a boy going off to war and taming a wild horse. The two books and others demonstrate Arthur Slade’s range as an author, but Jolted does the same within its own pages.

You would expect a book like Jolted to be more explosive. You have here a kid who is confronted with the most implacable enemy around; you would expect a resolution against a thing like that to involve battles with supernatural characters. Instead, the tale is introspective and inspiring. Indeed, Arthur takes a big risk and gives us a bittersweet ending. The external threats around Newton are just too big to be solved, so the real conflict of this novel is what happens inside Newton’s head, and here’s where Slade’s ease with characterization pays dividends. Few if any of us face the problems that Newton faces, and yet Newton still comes across as an average kid, reacting the way we do to far more mundane tribulations. And his ultimate victory becomes our victory — and perhaps an acknowledgement that perhaps our own tribulations aren’t so mundane.

Arthur Slade’s Jolted is an easy read, which hides the fact that it is actually quite a deep novel. You will laugh at various turns of phrase and at Newton’s pigheadedness, but you will be thinking about this tale for weeks after you put the book down. It doesn’t hit you like a bolt from the blue, but its effect is still electric.