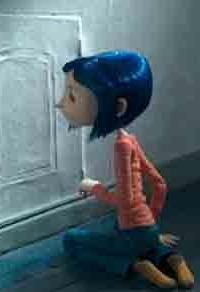 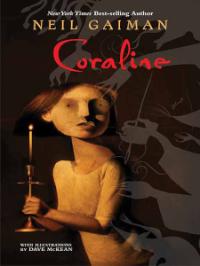 Cameron’s command a week ago Tuesday was succinct:

Go NOW and see Coraline. Go NOW! I don’t care if it says “in theatres this Friday”, go and see it NOW!

Well, he had to wait until this past Tuesday.

Coraline is, of course, Neil Gaiman’s short young adult novel, published earlier this decade, about a young girl with well-meaning but distracted parents. Having just moved into a rambling and subdivided English mansion, the precocious, lonely and very bored Coraline decides to explore, and encounters a small, narrow passageway into a mirror version of her house, where her perfect, button-eyed “other mother” invites the girl to stay, tempting her with magical wonders and the promise of unconditional and unending love.

Of course it’s too good to be true, and when Coraline refuses to pay the price to stay in the mirror world forever (having buttons sewn over her eyes), things turn dark, and the girl has to call on all of her courage and ingenuity not only to save herself, but rescue her real parents from the Other Mother’s web.

Coraline is a supremely creepy novel (click here for a review), and in the right hands it could become a supremely creepy movie. Those hands, it turns out, belong to director Henry Selick, whose previous credits include The Nightmare Before Christmas. Using stop-motion animation, CGI and 3D effects, Selick has transformed Coraline the book into Coraline the movie so well, that it feels like the story was always intended for the silver screen.

Selick also makes a good choice of voice actors. Dakota Fanning is well cast as Coraline, giving the girl something of a sardonic edge to the character’s innocence. Matching her is Teri Hatcher, voicing both Coraline’s mother, and the “Other Mother” with such exuberance, I suspect the woman grew up with a strong desire to play Cruella Da Ville. John “I’m a PC” Hodgman does very well as Coraline’s father and “Other Father” and, rounding out the cast are Dawn French and Jennifer Saunders, voicing two ageing belles of the vaudeville stage Miss Forcible and Miss Spink, and Ian McShane, voicing Mr. Bobinsky, an ageing circus master who is trying to teach the mice in his apartment to perform. All three characters have eccentricity coming out of their ears, and the voice actors bring it all to life.

The movie is exceptionally faithful to the spirit and the letter of the book — so much so that the movie shares the book’s imperfections. The ghosts of the other children the Other Mother has stolen remain underdeveloped and little more than plot furniture for Coraline to work around. There have been some additions, however, including a new character: a boy named Wybie (voiced by Robert Bailey Jr.), who proves useful in giving Coraline a foil to bounce off of — something that wasn’t needed in the novel, but which the movie benefits from.

Thanks to Selick, the movie walks that tightrope between innocence and creep that is the hallmark of Neil Gaiman’s work. There are visuals which are touching and beautiful, and there are some — in some unexpected places — that are brutally grotesque (I could have gone a long time and been happy not to have seen Other Miss Spink’s burlesque appearance). Dakota Fanning’s sardonic delivery translates Coraline’s precociousness from the printed page to the screen and maintains the character as a very compelling heroine. The movie is at its best when the Other Mother really turns on the charm, and the wonders that entice Coraline to stay in the Other world shift over into pure whimsy.

The animation is also quite good, here, harkening back to the style of Dave McKean’s illustration of Coraline but going in a new direction in certain ways, especially with different characters. Coraline’s hair is now blue, for instance, and I’m pretty sure that Miss Spink and Miss Forcible and the Father are all far more cartoony than they appeared in the book. However, it all fits into the style of the movie and the spirit of the book.

As for the 3D, the new technology is put to good use, and not overused. (There’s no instance of, for example, “Look! At this sandwich!”) The glasses were a bit of a chore to fit over my prescription lenses, but I was able to wear both for the length of the movie and enjoy myself.

It’s not perfect. There are minor pacing problems about halfway through the movie, and as the film was only an hour and forty minutes long, I could have appreciated a little more time to linger on the Other Mother’s threat. I’m sure that Coraline’s time in the mirror room took longer and was more of an ordeal. However, that’s nitpicking. Overall the story moves along at the perfect pace, developing characters, setting up plot, and delivering payoffs that make the whole experience worthwhile.

Coraline was the first movie Erin and I have seen in the theatres in about three years (not since Harry Potter and the Goblet of Fire) and it was worth the wait. Some of the material may not be for kids (though any nine-year-old who likes to be scared sometimes are certainly welcome here), but if you like animation, if you like a tense balance between charm and creep, and if you like the writing style of Neil Gaiman, this movie is for you. It is certainly a movie that I would love to see again, and I highly recommend it.