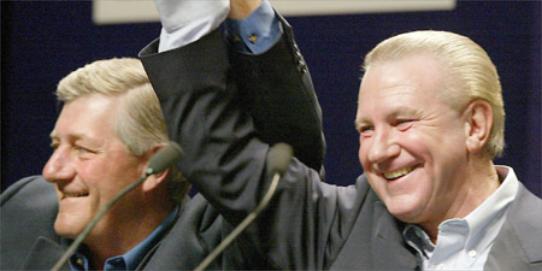 Yes, I’m sure of the title of this post. While Ernie Eves was the leader of the Conservatives who went down to defeat against Dalton McGuinty in 2003, I believe there is a good argument to say that voters weren’t just voting against Ernie Eves, they were voting against Mike Harris, the leader and premier who preceded him. 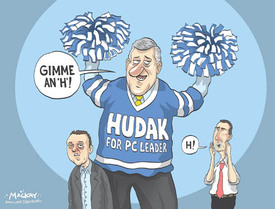 Have a look at this cartoon by Graeme MacKay, which appeared on March 19 in the Hamilton Spectator (reprinted here in accordance with his copyright stipulations), about the current PC leadership race. Now I can picture true blue Conservatives rolling their eyes already. Hold on, they say: only Harris gave the Conservatives their only two majority governments (and consecutive majority governments at that) in the seven elections held since 1984. Only Harris managed to increase the Conservatives’ vote totals the second time around (by 0.3%). Clearly, they argue, John Tory lost the 2007 election because he wasn’t Conservative enough. Clearly, they argue, the same fate befell Ernie Eves in 2003 for the same reason. Would that the Conservatives return to their hard right Mike Harris days. Ontarians would greet us as liberators.

Wishful thinking, in my opinion.

It can be argued that Mike Harris won re-election in 1999 for a number of reasons unrelated to the success of his policies. He was up against an inexperienced Liberal leader, and Conservative campaigners ran a devastating series of advertisements that just cut him off at the knees (“Dalton McGuinty: he’s just not up to the job”). Harris also benefitted from the fact that Ontario’s economy was doing better in 1999 than it was in 1995, although defenders of Bob Rae point out that the period of growth began several months before Rae was booted from office. Also, the effects of Mike Harris’ policies on Ontario in general and Toronto in particular hadn’t had time to be felt, yet. Voters in the 416 (Liberal) and rural (Conservative) strongholds kept to their base, so ultimately it was voters in the 905 region of the province, still satisfied with the choice they made in 1995, who tipped the balance by voting to retain the Harris government.

By 2001, this had changed. We’d had the Walkerton inquiry into the deaths resulting from ecoli bacteria in a municipal water supply raising questions over the merits of cutting back on environmental regulations and oversight. We had Toronto City Council in a dysfunctional mess following amalgamation and heading towards fiscal destitution as a result of provincial downloading (a fact that Harris recognized and acknowledged when he reversed his earlier decision to take the province out of public transit funding). Continued municipal amalgamations were making the Conservatives unpopular elsewhere in the province, and then there was the fiscal scandal of selling Highway 407 for pennies on the dollar in order to balance the budget in the lead-up to the 1999 election.

The fact that the policies of Mike Harris had become unpopular is, in my opinion, best shown by the June 28, 2001 byelection in the riding of Vaughan-King-Aurora. The election had been called to fill the vacancy resulting from the death of former Transport minister Al Palladini. This election returned popular Liberal MP (and once and future cabinet minister) Greg Sorbara to Queen’s Park.

Now it can be argued that Greg Sorbara was so well known and so well liked in the riding (which he held until 1995, when he retired) that it would have been impossible for the Conservatives to defeat him. However, Al Palladini was also a popular MP who had acquitted himself well as a Conservative minister (despite some policies that I personally disagreed with). The Conservatives also ran Joyce Frustaglio, a local politician with her own strong constituency who now sits on Vaughan city council. Worse, they turned the byelection into a mini-referendum on the Harris Government by plastering the riding with Frustaglio election signs, most bearing the slogan: “The Mike Harris Candidate”. I visited the riding during the byelection campaign, and hadn’t seen so many signs in one place since the 1997 federal election in York South-Weston, when the Chretien Liberals threw everything they had to try and unseat maverick MP John Nunziata.

In the end, Greg Sorbara got over 60% of the vote, 21,961 to Joyce Frustaglio’s 12,172. The remaining three candidates picked up 1727 votes between them. This was followed by the September 20, 2001 byelection in Beaches-East York, hotly contested between New Democrat Michael Pru and Liberal Bob Hunter, wherein the Conservative candidate (Mac Penney) received just 10% of the vote. While this result is hardly surprising in this New Democrat stronghold, the poor performance of the PC candidate here was specifically cited by people around Harris as a reason he gave for deciding to quit the leadership when he did. To add insult to injury, the Liberals’ George Maroosis came within 19 votes of toppling Harris’ replacement Al McDonald in the by-election to fill the seat Harris vacated.

Ernie Eves didn’t help the Conservative fortunes in 2003. His campaign was lacklustre, and he changed the revolutionary fervour of Harris’ policies into something more cynical and calculated, such as a tax credit for mortgage interest, which benefitted Conservative-friendly 905 area voters at the expense of Conservative-hostile 416 area voters. However, it would be a mistake to say that voters punished him for trying to break from the Harris regime. He didn’t really do that, and he’d have been hard-pressed to try. Ernie Eves was Mike Harris’ finance minister when the bulk of the Common Sense Revolution was enacted. He was to Mike Harris what Paul Martin was to Jean Chretien, and he was on significantly better terms with Harris than Martin was with Chretien.

Eves also ran on policies designed to curry favour with the hard right base, including the mortgage interest tax credit already mentioned, and a tax credit for those families sending their kids to private school. It was these policies more than anything, in my opinion, that motivated progressive and centrist voters to work hard to defeat the aging Conservative government. While Eves’ platform of tax cuts may have been more stingy and less egalitarian than Harris’ blanket 30% cut in provincial income taxes, Eves’ targetted tax cuts were seen as a continuation of Harris’ harmful and fiscally unsound policies.

True blue Conservatives might long for a day when Harris or a person like Harris could lead the Conservatives back to power. They might like to believe that the majority of Ontarians were on board with his policies, but the fact remains that Harris never achieved majority support when he was elected — it is only through our first past the post system that he managed to transform a merely respectable 45% showing in the polls into an overwhelming mandate of seats. The majority of voters still voted against him and, by 2002, many more had reconsidered their decision to support him in 1999. It is only his decision to leave his post that spared him the electoral defeat that Eves received a year later.

But Harris baggage aside, if Tim Hudak is elected leader of the Ontario Conservatives (and he hasn’t even declared, yet), he could still be an effective leader for the party. Hudak has performed well in Queen’s Park and he has broad support within the party membership and the caucus and that’s important. And by the time the next election rolls around, it will have been eight years since the Harris/Eves government was thrown out, and anger may have been dulled in the same way that anger appear to be dulling regarding Bob Rae’s term in office. This is a good thing, because whoever the leader of the Conservatives should pick, should rise or fall to the electorate on their own merits and the merits of their policies, and a strong opposition to the McGuinty government is simply good for Ontario’s democracy.

But Harris remains a polarizing figure, and his policies aren’t supported by the majority of Ontarians, especially now that we’ve had a chance to experience them. He or someone like him would be hard pressed to gain traction in all areas of the province as long as our centrist (but sometimes cynical) government continues to govern with a modicum of competence.