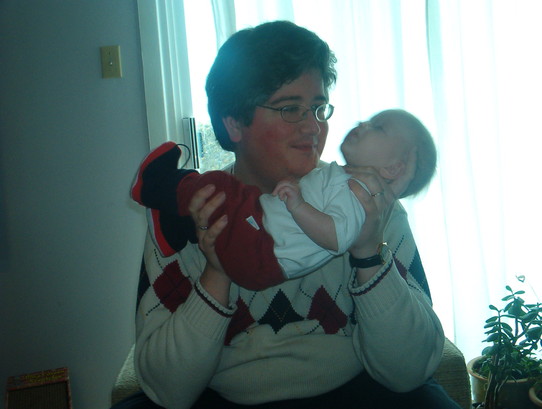 That’s not Nora I’m holding, that’s Vivian. I was sorting through the pictures my backup managed to save, and found this one from February 26, 2006. Vivian was almost four months old in this shot. And, yes, I am about to benchpress her, what of it?

This picture more than any other really drives home how much Vivian has grown in the three years that followed. I’m now having actual conversations with her, and earlier today she helped me wash the dishes. No, really! I’d hand her a plastic cup, and she’d spend the next five minutes studiously ducking it into the water and rinsing it off, while I did all the other dishes. It was an equitable division of labour, and no one’s complaining.

Nora is already older than Vivian was when this photograph was shot. She definitely responds to words and seems to be babbling coherently (as in saying “dadadadada” when approaching me and “mummummum” when approaching Erin). She is very mobile, now, and can climb up all of the stairs in the house, much to our horror. It won’t be long before she walks too.

I am still looking forward to when both Vivian and Nora are both out of diapers, able to zip up their own jackets and we’re having conversations about what they learned at school today. But these days have passed by quicker than I thought they would. And I realize now why you need to pause sometimes and savour these moments. They won’t be repeated.

And with that I leave you with more Umbilical Brothers videos.

Schwarzenegger Replies to the Umbilical Brothers