Help Break the Blackout in Iran 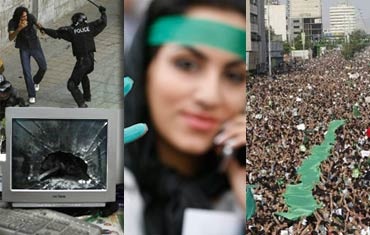 More than a few people have noted, with frustration, that the death of Michael Jackson and the sideshow of his passing, has deflected the world’s attention away from Iran. I share their frustration. The timing is such that one could even put together a tinfoil hat conspiracy story about Mahmoud Ahmadinejad having Jackson assassinated, knowing what the Western media would do next. Oh, look, a shiny thing!

In Iran, the situation looks grim. The regime has instituted a communications blackout, essentially trying to shut down the Internet in order to stop the dissidents from communicating and associating. Journalists, protesters, opposition politicians and others have been jailed and there are reports of torture. The group Avaaz.org has tried to help by providing funds towards anonymous proxy services. These services provide Iranians with a secure link through which they can access the Internet and keep the lines of communication open. The Iranian government is trying to shut these down, however, and it’s a game of whack-a-mole. I’m rooting for the mole.

In Avaaz’s own words:

We urgently need to help Iranians get back on the internet to have their voices heard in Iran and the world. Secure and anonymous “proxy services” are helping people to bypass regime controls and get online — but they’re overloaded and running out of funds.3 A small donation of just $10 can provide bandwidth for hundreds of secure emails - if 10,000 of us donate in the next 72 hours, we can help break the blackout:

Proxy services provide people with a single link at which they can freely access the internet. The link is changed every time the regime blocks access to it. With 10,000 donors, we can scale up the proxy services massively — providing more servers, bandwidth and advanced technical support.

There are signs of hope in Iran. The clerics are not unanimous in their opposition to the protesters. As long as we stand up to the regime’s attempts to block open communication, to thwart freedom of association and freedom of speech, democracy has a chance to blossom in Iran. I’ve donated $25. So I challenge you to take a break from the Michael Jackson media watch and offer your support to the people of Iran.