Congratulations to Arthur Slade for Gaining a Hunchback 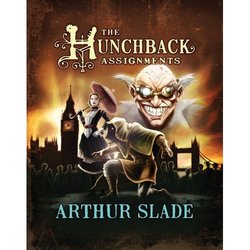 My apologies for the slow posting of late. The book commissions are done, but the renovations (and cleanup afterward) are taking their toll. But on the plus side, we have a great kitchen floor and a new refrigerator. There should be more writing developments this month. I’m about finished on a new draft for The Night Girl.

But I’d like to take this moment to congratulate Saskatchewan author Arthur Slade on the release of his latest novel The Hunchback Assignments. Arthur is as proud as any new dad should be, and I have a feeling the book is going to go places. It’s got a good publisher, and Arthur himself has a good buzz about him (and he’s fresh off the successful release of his novel Jolted.

And here’s the blurb:

“You will always be ugly,” Mr. Socrates had regularly reminded him over the years. “Always. But you are better able to adapt than any chameleon. Be thankful for it.”

When Mr. Socrates, a member of the shadowy Permanent Association, hears of a hunchback infant with the ability to transform his appearance, he decides to take him in. Naming him Modo, he raises the boy in isolation, training him to become a secret agent.

The Hunchback Assignments should be on sale at better bookstores everywhere. It’s steampunk excellence, and you should pick up a copy as soon as you see one.

The Cyclist Who Drew Toronto

This is one of the coolest things ever. Hat tip to Torontoist:

James Redekop loves to cycle. Between 2004 and 2009, he estimates that he’s cycled for six hundred and fifty hours and covered more than eight thousand kilometres. Using the GPS data from these rides, Redekop created the Etch A Sketch-style animation above (the red lines represent five minutes of his cycling and the red arrows indicate rides outside of Toronto). But turning his riding into a cool animation wasn’t always his intention.