An Injury to One is an Injury to All
(Torchwood: Children of Earth Reviewed) 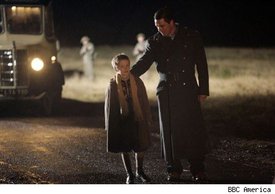 Erin had to force me to watch the mini-series Torchwood: Children of Earth. And while my geek credentials may be under threat, I just never warmed to Torchwood or, as Erin calls it, Doctor Who’s angsty, nihilistic teenage daughter.

Don’t get me wrong, Torchwood had a lot going for it, including fine actors and stable of directors shared with Doctor Who, as well as a writing staff suddenly freed from the limitations of writing before the watershed. There were some good episodes among an unfortunate propensity to exercise their adults-only status just because they could, but the overall style of the show was not what I’d signed up for — to wit, the mixture of darkness and light, intelligence and lightheartedness, youthful optimism and adult world-weariness that marked Doctor Who.

But Torchwood season three promised something different. Instead of a traditional series of twelve stand-alone episodes, Torchwood was shortened to five hour-long episodes, all grouped together around a single story, entitled The Children of Earth. Russell T. Davies, who’d previously been too occupied by Doctor Who to really give his brainchild the steady hand it deserved, penned four of those five hours. The reviews that started coming in were universally good, even among those who had written off Torchwood. “The series had gotten it right!” one friend lamented (just in time for its conclusion).

So, at Erin’s behest, I picked up a copy of all five episodes. And I sat down to watch the first hour. Three hours later, it was two in the morning, and we promised each other that we’d watch the remaining two episodes the next night. My earlier misgivings were completely misplaced. Torchwood: Children of Earth is one of the best miniseries ever to grace British television, a landmark production destined to stand among such greats as The Quatermass Experiment.

The story starts in 1965 Scotland where a bus driven by an unseen driver drops off a dozen orphaned children in the middle of a Scottish moor. The confused children are asked to get off and walk down the road where they’re suddenly confronted by a great blaze of light. The unseen driver tells the children to walk into the light and, despite probably knowing that no good will come of this, the children do this anyway — except for one child who manages to break and run.

Flash forward to the present day, which starts out as normal for the remnant Torchwood crew (investigating strange deaths at a hospital, stopping to pick up coffee, that sort of thing), when suddenly all of the children across all the world just stop, dead in their tracks, standing around staring blankly ahead while their increasingly frantic parents try to reach them. Then, as the moment passes, the children snap out of their trance and go on as if nothing has happened.

Of course, this sends alarms across all the governments, who by now can recognize the signs of an imminent alien attack when it presents itself, but one government in particular — the government of Great Britain — is more alarmed than most. The signals being sent here are unmistakably those of aliens the British government has dealt with before, in secret. John Frobisher (played by Peter Capaldi), a distinguished career civil servant working in the Home Office — and, incidentally, the government’s liaison with Torchwood — briefs the prime minister and is ordered to take steps covering up the secret dealings between the British government and the alien race known as 4-5-6, starting by killing everybody involved in the incident in Scotland in 1965. Just one problem: one of those individuals is Captain Jack Harkness and, not only is he the head of Torchwood, it’s quite clear that he can’t die, so Frobisher’s operatives are forced to take extreme measures to try and shut down Torchwood and put Jack out of commission forever.

Torchwood: Children of Earth is divided up into five “days”. The first two days focus primarily on Torchwood’s struggle to survive after being betrayed by the British government. Ianto, Gwen and Gwen’s husband Rhys scramble to get from Cardiff to London, avoiding a net of security cameras and wire services that can pick them out the moment they use a cellphone or ATM, but Jack gets the worst of it, including having a bomb planted in his stomach, and then getting sealed inside a block of concrete. While Torchwood slowly recovers and re-establishes their derring-do, the alien threat builds, with the children of the world freezing more and more often, and starting to chanting warnings that “We are coming. We are coming back. We are coming tomorrow. Tune in on the same bat time at the same bat channel—” You get the idea.

Head writer Russell T. Davies and director Euros Lyn plays off visceral fears throughout Children of Earth. The scenes of schoolyards full of kids frozen in mid-play are deeply creepy, and the fact that our children are the target attacks the audience in the most vulnerable places. And they don’t let up, ever.

In Day Three, the 4-5-6 arrive, taking up residence in a specially constructed tank within London’s Government House, to parlay with the nations of the world. Their demand: exactly one-tenth of the world’s children, to be picked up at assigned gathering points by noon tomorrow, or else the 4-5-6 will release a virus that will extinguish human life on Earth practically instantaneously. The scene where the British government reluctantly decides to acquiesce to the aliens’ demands, and then work out a system for how the U.K’s 385,000 children will be selected and delivered, is terrifyingly compelling to watch. Who says horror can’t be found in a posh office? Who says monsters need to be scaly, or be without conscience? Indeed, it is the everpresent sense that the conscience of each government minister must be positively screaming, even as they embark on their desperate attempt to do a lesser evil to avoid a greater one, that makes the scene so horrible. It is a triumph of acting, direction and writing that makes this scene the apex of Torchwood and possibly Doctor Who.

All of this makes the final two episodes of Torchwood: Children of Earth some of the most intense television around. Nobody gets away unscathed. Throughout this story, characters are forced to sacrifice the few in order to save the many, but Russell T. Davies takes things one step further. Jack starts this story sacrificing twelve children in order to save an estimated fifty million, but he finishes it by sacrificing something a lot more personal. The heart of the tale is expressed by Jack when he quotes the Doctor, saying that the 4-5-6’s demands are impossible because “an injury to one is an injury to all.” Russell T. Davies disputes the adage that the rights of the many outweigh the rights of the few by asking how we would feel if it was our children, and if that’s how we feel, then what right do we have to sacrifice someone else’s? Lilly, John Frobisher’s eldest daughter, asks this question outright when, kept home from school for her own protection, says, “Why? What’s so different about us?”

But Torchwood: Children of Earth is far more John Frobisher’s story than anybody else’s. Peter Capaldi puts on a masterful performance of a civil servant, used to keeping his head down, asked to do terrible things, until he reaches a line he simply cannot cross. His final scene trumps the climax for emotional impact, and that’s not faint praise.

Children of Earth is not perfect. The actress playing Captain Jack’s middle-aged daughter lets the side down a little, and the character of Clement McDonald (the child from 1965 who ran, and who shows up in the present day as an old man in a mental hospital) has too much about him that doesn’t get explained, leaving me to wonder if he’s little more than a convenient device the authors inserted to give themselves a resolution. But these flaws only show up in the cold light of day. Russell T. Davies knows how to write for the visceral. The emotional stories being told here are everything that Torchwood should have been from the start. It’s adult without flaunting its adultness. And it is just plain intelligent.

If Torchwood doesn’t return, it will have left on a high note. If it does return, then it will at least have a formula that should sustain it for years to come.