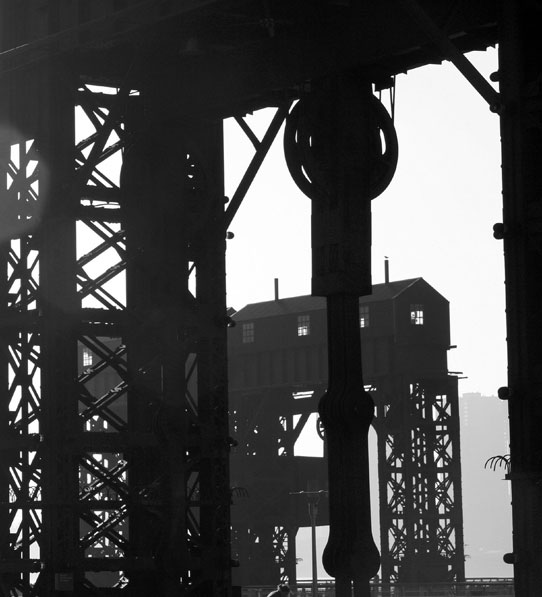 The photo above is entitled Gantries and is by Young Yun. It is used in accordance with his Creative Commons license.

The story of Icarus Down seems to be coming together. The structure is in place up to, but not including, the climax, and it’s now a matter of choosing which scenes appeal to me most at the moment, and adding in the details. The story may or not have the advantage of the fact that it is almost two books. There is a major turning point in this story which sends Simon out of Iapyx and onto the forest floor, and I find myself jumping between the two sections.

In the past, I’ve found that it helps to have two books on the go, so that when creative inspiration falters on one, I can channel my energies on the other. This helps limit the frustration of writer’s block. The first drafts of Fathom Five and The Young City were written at roughly the same time and were finished within a year of each other. The Night Girl was written on its own, and as a result there was a two year period where the story simply languished (although, to be fair, at the time I was working on getting The Unwritten Girl and Fathom Five published, so there was some revision work involved). Most recently, I’ve swapped between revisions of The Night Girl and The Dream King’s Daughter.

So, in the Zombies versus Ornithopters fight, I seem to be well ahead of Erin’s Sorrow’s Knot. The iPhone may be mine! But it’s probably best not to count one’s chickens before they hatch.

On a related topic, you may remember my mentioning before that, I write my stories, I gather “soundtrack albums” that I play almost constantly while I write the stories in question (in the car while I drive, or on my earphones while I actually sit down and write). Having now written six stories, I can say that each soundtrack album is distinct. Some are only played because the songs within match the tone of the story in my head (such as the case with The Unwritten Girl), while others have vast stretches of music which I can see playing as incidental music for key scenes that I picture in my head as if they were on film, such as Fathom Five and The Dream King’s Daughter. The Young City is the only story of mine which doesn’t really have such an album.

Icarus Down has a soundtrack album too, and the musician who is behind most of those tracks is an artist named Zoe Keating (thanks again to Cameron for putting me onto her). She’s interesting because she plays the cello, and then loops her tracks while she is playing and plays overtop them, so that the effect is like sixteen cellos playing at once, each going off in different themes which contribute to the whole. What’s especially interesting is that she’s able to do this on stage, using nothing but her cello, a Macbook Pro, and a customized console of foot pedals to activate various scripts on her machine.

Anyway, her web site is at http://www.zoekeating.com and I highly recommend her stuff. If you go http://www.zoekeating.com/projects.html you’ll find three tracks that you can listen to or even download to your iPod for free, as well as videos of her in concert. Have a listen to Exurgency and Legions (War) and see if you can picture cities on string and ornithopters flying.

With that in mind, here’s the revised opening to the novel, featuring changes to build the atmosphere of the world.

The day Isaac died started as all days do: in shadow.

I stood on a platform in Daedalon’s flight bay. The cable gantries of the city stretched above me, its pier-hooks like barbs in a net. White planes from Daedalon and the other twelve cities hung by their tailfins, waiting.

The hot wind tugged at my tunic and my hair, and I kept a firm grip on the plastic sheath of one of the cables. If you’re worried, my instructor had told me, then just don’t look down. Of course, he looked down all the time.

Below me, clouds rolled and billowed over the floor of the chasm. A sheet of white against the black lattice-work of cables, it was hard to tell how far it was. Sometimes it looked as soft and up-close as bedding. Then, moments later, the wind would pick up, the clouds would shift, and it felt as though, if you fell, you’d fall forever.

An ornithopter flew in and caught itself in one of the docking hooks, which dragged it to a stop by another nearby landing bay. The impact rang the cable struts around me like a bow against a cello.

I brought my gaze back up to my ornithopter. I swallowed down my stomach and my urge to go clambering back to the safety of the city’s insides. I stayed at my post.

Behind me, I heard a whistle, and a canister plopped into the receiving hatch of one of the pneumatic tubes. I looked, and my knuckles whitened in frustration. The manifest. Not my delivery.

But there was another whistle, and another canister plopped into the receiving hatch beside it. I pounced on it, then stopped, and made myself remove it slowly and carefully. I didn’t want to share the cadet-level shame of bobbling a canister and dropping it into the clouds below. I opened it and glanced at the contents. Batteries. Good. I turned to my ornithopter, before I stopped myself again, and turned back. Check the batteries; the words echoed in my head. Always check the batteries.

There was a machine with a slot and a line of LEDs. They lit up to the top as I fed in each battery in turn. I nodded, satisfied. A full and proper load. Then I walked over to my ornithopter, grabbed onto the doorframe, and climbed in. I stood on the frame of the pilot’s chair, looking up at a floor that was now a wall. I unhooked at hatch and pulled it open, revealing the empty banks for the batteries. I snapped in the batteries from my canister, noting with satisfaction as each LED indicator light lit up. When everything was in place, I set the canister in its place and closed the hatch. Then I climbed into my pilot’s chair. Making sure I was strapped in, I turned the winch by my arm-rest, turning my chair around to face the front windshield and the cavern floor below. Gravity tugged me out of my seat, against my harness. Again, I swallowed down my stomach.

Behind me, I heard someone step onto the platform, grab up the other canister, and pull out a handful of papers that rattled in the wind. Someone stepped on the doorframe.

From this point on, the scene is mostly unchanged from the scene posted here.

And, here’s a YouTube video of Ms. Keating in concert, building up her composition Lost:

Finally, I should mention that, as I was looking up stuff about Icarus Down, I found that the title is being used elsewhere. A Slovenian punk band named Icarus Down has been playing since 2004 and is currently working on a new album. Their music isn’t bad, but it isn’t quite the sound I’m looking for when it comes to populating my story’s soundtrack. One wonders, though: now that I’m writing a story called Icarus Down while listening to the music of Zoe Keating, perhaps I should write a story called Zoe Keating while listening to the music of Icarus Down?