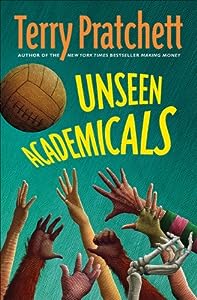 The thing about Terry Pratchett’s latest novel Unseen Academicals, the important thing about the novel, is that it’s not about football.

Terry Pratchett has had a pretty good year. When he announced that he had been diagnosed with early onset Alzheimers, his many fans were heartbroken, but he sternly told us to buck up and said that he still had several books in him. He then followed up with Nation, a non-Discworld coming-of-age novel which was one of my best reads ever, and then for Discworld, he wrote the recently released Unseen Academicals.

Although I have enjoyed all of Pratchett’s writing, some of his fans have tempered their enthusiasm for his latest novels. I’ve heard people say that he’s softened the hard-edged humour of his earlier works, and that while he has become a more thoughtful writer, they mourn the loss of his wild approach to fantastic parody. And while I as a fan entered Pratchett’s world with (in my opinion) superior later offerings like Wee Free Men, Going Postal and The Truth, I had to admit that he lost the thread a little with Making Money. Perhaps this shouldn’t be a surprise; after all, how can you write nearly forty books for a fantasy series and manage to maintain the intensity?

However, I would say that Pratchett’s latest novel, Unseen Academicals, is a fine return to form. His writing is as thoughtful as ever, he maintains his warm, idealistic cynicism of humanity, and he employs a number of compelling characters to tell a story about the game of football which, as he states emphatically, is more than just about the football. More importantly, it’s funny. There are many laugh-out-loud moments, and many of the idiosyncrasies of our own world, from football hooliganism to the world of fashion design, is deservedly skewered by his ticklish pen.

Please note that the rest of this review contains spoilers, so if you don’t want to be spoiled, turn away now.

Image by Getty Images via Daylife

Pratchett’s Unseen Academicals is so multi-faceted and multi-layered, that it’s hard to know where to start, but all the plot elements come together nicely to form a decent whole. More importantly, the various characters and their plots contribute a lot of detail to the already vibrant mosaic that is the Discworld’s largest city, Ankh-Morpork. In this book we meet Glenda, the head of the night kitchen at Unseen University and, through her, we get a bigger picture of what goes on behind the scenes at the Discworld’s most prestigious (or, so it thinks) wizard academy. It is a testament to Pratchett’s skills that the stories of the servants that make Unseen University function are as interesting as the flighty wizards that have been front and centre in many of his earlier novels.

Working with or alongside Glenda is Trev Likely, a young man working in the University’s candle vats. By day, he’s an aimless young man interested only in getting along and surviving in the rough-and-tumble neighbourhoods of the poorer side of Ankh-Morpork. That is, until he meets Glenda’s co-worker Juliet — an extremely beautiful young woman from those same neighbourhoods who may be far less brainless than Glenda or anyone else thinks. There’s just one problem: Trev Likely is the son of Dave Likely, a renown “foot-the-ball” player who scored an unprecedented four goals in his career before succumbing to the hooligan violence of “the Shove”. Juliet’s family are supporters of the team that killed him. It’s a classic tale of Romeo and… um… Juliet, with a bit of Cyrano mixed in, as Trev turns to his unassuming and learned friend Nutt, who seems to have a way with words, to help him woo Juliet.

At the University itself, things are in disarray. The Dean has abruptly left the institution to become Archchancellor at a new, rival university being set up in neighbouring Pseudopolis, and he’s taken a selection of young, ambitious professors with him. Archchancellor Ridcully is apoplectic at this treachery.

In the midst of this chaos, Ponder Stibbons has essentially assumed command (on the firm understanding from Ridcully that this is entirely at Ridcully’s discretion — actually, the two make a very good team), taking over all of the administrative functions required for the University to function. And he’s found something disturbing. Or, disturbing to the wizards, at least. While auditing the University’s many ancient and oft-forgotten traditions, he notes that the University receives a significant portion of its annual funds from a trust bequested to the University by an old patron. That bequest came with one condition: that the University maintain a football team, and that football team play regularly.

With the wizards, of course, being as wide as they are tall, this is a ludicrous suggestion, but when Stibbons points out that losing the bequest means cutting into their catering budget… well, the wizards realize that they have no choice, and set about to training (and, boy, isn’t that a fun thing to watch). Archchancellor Ridcully takes the task of going to Lord Vetinari — the tyrant of Ankh-Morpork — to deliver the bad news (it’s well known that Vetinari hates football).

Much to Ridcully’s surprise, however, his announcement dovetails nicely with Vetinari’s own plans. A recent foot-the-ball game between two neighbourhood rivals has resulted in significant violence and some deaths among the supporters, and he believes that the time has come to exercise control over the game of football. Just as he reduced crime by organizing it, he now wants to call in the captains of the various neighbourhood teams and have them agree to a new set of rules to be played in a new ‘sanctioned’ game. And what better way to launch this new era of football by having an all-star team made up of these street teams face the university’s team, the Unseen Academicals. The wizards are given the task of transforming a game — which, at this point, seems to be a variant of rugby where the players kick and throw a bowling ball — into the high speed, high flying contest it could be.

It all fits nicely. Almost too nicely. Almost as if the events here are being manipulated from above. Ridcully and Stibbons are aware there’s something afoot, encouraging the growth of this new and more elegant game of football, but they don’t know what it is. Various incidents give off no hints of anything magical. Maybe it’s something religious. Can football be a religion? But, of course.

But the thing about Unseen Academicals, the important thing, is that it’s not just about the football.

Central to the story is a small, soft-spoken man named Nutt. Well, not a man per se. He works with Trev in the vats beneath Unseen University as an apprentice candle dribbler (no self-respecting wizard works with pristine candles). Nobody knows what to make of him. He has an incredible amount of book knowledge, and an uncanny understanding of the human psyche. He is also far, far stronger than he looks. But because he is so unassuming, and because the people around him, like Trevor and Glenda, are basically a decent sort, he is generally accepted by his co-workers, who gradually become his friends.

Nutt is, however, an orc — a modified race of goblins known throughout the Disc as ravenous, unthinking brutes used as weapons centuries ago by both sides in the war against the ‘Evil Emperor’. He was raised in Uberwald (a land of vampires and werewolves and Igors, and where there are campaigns to exterminate the few orcs that remain), and came under the wing of the leader of that country, Lady Margolotta. She appears to have sent Nutt to Ankh-Morpork, with instructions to Vetinari and Ridcully that he be kept out of the public eye, possibly as some means of trying to rehabilitate his race. But clearly the first hurdle to overcome is that of human prejudice — which can be a bit of a problem in the pressure cooker atmosphere surrounding the looming first game of the new brand of Discworld football. Especially as Nutt has volunteered to train the University’s football team…

The common thread that runs through Unseen Academicals is that it’s about the hordes. The Orcs attacked in hordes after all, and on more than one occasion, the human crowds at Ankh-Morpork’s football matches function as one unit. Over and above football hooliganism, however, Pratchett also pokes fun at celebrity culture, as seen through Glenda’s eyes when her friend Juliet stumbles into the world of dwarf fashion design and becomes a star model. You might not think there’d be a reasonable connection between football and fashion design, but Pratchett makes it, and makes it brilliantly.

Just as Nutt rises above the expectations imposed on him by his race, Pratchett shows that the hordes of Ankh-Morpork are comprised of individuals — real, live individuals, who think and talk and love and aspire, even if they have to struggle against themselves and their neighbours to do it. Pratchett is being a cynical idealist here, and the effect is uplifting.

Pratchett maintains the thoughtful bent his writing has taken these past few years. There’s a lot of empathy to be had as the various characters deal with the joys and sorrows of their life. And the book is infused with Pratchett’s clear love of football — maybe not the game itself, but what it represents: the camaraderie of the supporters, the memories of a father and son’s day out, the importance of belonging to something bigger than yourself. If you could only divorce that from the tribal violence, the intolerance of being different or rising above your station, then the world would be a much better place indeed. Glenda, Trevor, Nutt and Juliet’s stories each tell this tale in microcosm, while Lord Vetinari, Archchancellor Ridcully and Pondor Stibbons add their own charismatic contributions (also, be sure to look for William de Worde’s cameo at the end. It is a hoot!).

Better yet, Pratchett maintains these narrative elements straight through to the end. Things don’t break down as they did with Making Money. Elements don’t get introduced and not used again. All the major characters get a full and proper story arc and, at the end there is a feeling of satisfaction that only a well structured, well delivered novel can bring. A satisfaction not unlike that of watching a good game of football, in fact.

Unseen Academicals shows that Prachett isn’t done with his writing. He has several good books still in him. I am very glad of that, and am looking forward to the next one.