A Little Bit of Subterfuge
(Icarus Down Passes 40,000 Words) 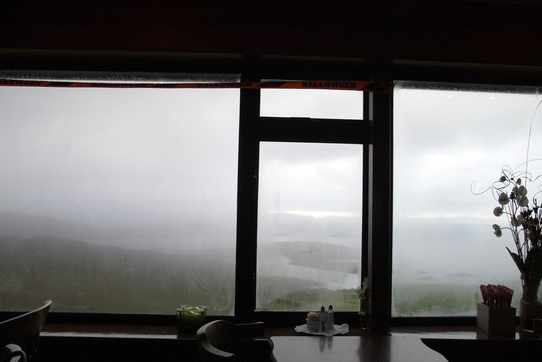 The photograph above is entitled Fog During Lunch and is by David Kinney. It is used in accordance with his Creative Commons license.

I’m pleased to say that I’m on a bit of a roll with Icarus Down — pleased to say, and also a little reluctant, as I don’t want to jinx it. But I am enjoying this part of the writing process, where I’m discovering the tale, much as if I was reading it for the first time.

Here’s a scene from the middle of the story, after Simon has finished his rehab, and has returned home to his dorm room at the flight academy. He’s a little bummed out because he wasn’t able to say goodbye to Rachel at the Infirmary, and the Flight Master won’t let him fly, since all non-essential flights have been grounded by order of the mayor’s office.

I jiggled my key into the lock of my dorm-room apartment, and shouldered open the door. I set down my overnight bag and shoved it aside with my foot. Then I looked around my room.

After four months away, the narrow room with its cot, bedside table and desk felt like a book I hadn’t read in years, but the memory of it hit me instantly. The cleaning crew had kept it meticulous. I slid open the door to the bathroom and looked inside. Yes. Meticulous.

I pulled open my blind and looked out the window. I saw the cables of my city laced around me, the umbrella of the city’s roof arching comfortably down. Below, the chasm stretched as a white ribbon between black banks. There were more steam jets in the distance as sunlight glittered off the cap, but these were far enough to be safe.

An ornithopter swept into view, buzzing towards one of the fringe cities. I turned away, then turned back sharply. Hadn’t the Flight Master said that all non-essential flights had been grounded? What had been so essential about this one? I watched the ornithopter until it was a speck on paper, but found no answers there.

I sat on my bed a long while, tapping my knees and looking around my room. I didn’t want to sleep; I’d done more than enough of that in the Infirmary. Idly, I pulled open the drawer of my bedside table and fiddled around with the stuff inside. Then my hand fell on something familiar and comforting, and I pulled it out.

I turned the fat lump of metal and red plastic in my hands, then idly flipped out the attachments. The knife. The screwdriver. A pair of scissors and something to clean my fingernails with. A strange spirally spike of metal that I had no idea what it did (I also used it to clean my fingernails). I ran my fingers over the edges, and the engraving of a cross on a shield that may have meant something to someone some time ago. All I knew was that this had belonged to my dad. It was all I had left of him. After a few more minutes of turning the thing in my hands, I closed the attachments, and shoved it into my pocket. I needed it close.

Maybe the Flight Master’s advice wasn’t so bad. Maybe I should just wander around. It was certainly better than moping in here. My muscles still needed rebuilding. But first I needed a shower. I stood up and pulled my shirt off over my head, and stepped into the bathroom.

Washed and dressed in civilian clothes (which looked like my uniform, only less starched and pressed), I set about unpacking. My body was still working up to the task of not moping in here. Fortunately, there wasn’t much to unpack: a change of clothes, some toiletries — some of which might have belonged to the Infirmary, but I didn’t think they’d ask after toothpaste — and the books that had kept me sane while I lay awake those long hours in my hospital bed. I sorted through the ones I’d have to return to the library as soon as possible.

Picking up the most recent book — the one I was pages away from finishing — I casually flipped it open when something dropped from the pages and skittered beneath my desk. It looked like an envelope. Frowning, I crossed the room, got down on my knees with some difficulty, and fished it out.

It was an envelope, addressed to me in thinly-drawn letters. Rachel’s handwriting, I realized with a jolt. I ripped the envelope open and pulled out the letter, which smelt of anti-septic. I sniffed it and smiled as if it were perfume.

Sorry I couldn’t say goodbye, said the letter. But I still want to see you. Please meet me at the Junction Fountain after my shift ends at 1800. We can have dinner, and go to a movie. Let’s call it a date.

My heart pounded. I felt behind me and sat down on my cot, hard. A date! She wanted to date! She really liked me!

She’d signed it with a kiss! And there was also a p.s!

P.S. Turn out the lights, draw your curtains, and look around you. Look carefully.

Look over your shoulder when you walk.

What the heck did she mean? But then I thought there was one way to find out. I pocketed the note, closed the bathroom door, drew the blind over my window and, crossing the room, turned out the light. Then I came back to the middle of the room, stubbing my toe on the end of my bed, and stood there, holding my breath. I turned in a slow circle, examining the walls of my room.

Two turns later, I was about to head to the light-switch, angry that Rachel had played a trick on me, when I saw light out of the corner of my eye. I found myself staring at the picture I’d hung on the wall soon after I came here from vocational school. It was a photograph of my parents and I, in happier days. And there was a pinprick of light shining by one corner of it.

I came over and stared at the little point of light. I put my hand in front of it, and saw the light shine off my palm. Then I peered close. It was a hole. A hole in my wall. Putting my eye to it, I blinked when all I saw was distorted light. There was a lens in the way.

I leaned back, my mouth hanging open. A peephole. Someone had stuck a peephole into my apartment. I closed my mouth. I clenched my teeth. Then I left my apartment to give my neighbour a piece of my mind.

I pounded on my neighbour’s door. “Ezer! Open up! I want to talk to you!”

No response. I started to feel a little sheepish, standing in the corridor, pounding so loudly. A couple of my fellow students passed. Some looked at me, then shrugged, before walking on. When things were more private, I pounded on the door again. “Ezer! I’m not going to go away until you talk to me!”

“He’s not there,” said a voice behind me. I turned around, startled. An upperclassman who’d walked past me had turned back. He stood a few feet away and nodded at the door. “You’re looking for Wheezer Ezer, right?”

I nodded. Ezer struggles with allergies were legendary.

I blinked. “He is?” Come to think of it, I hadn’t heard him sneeze since I’d arrived home.

The upperclassman nodded. “Two months, interning at the flight bays of Scylla. Got his papers last week. I helped him pack.”

I blinked again. “He barely shows up to class. How’d he land such a cushy assignment?” I felt jealousy rising up inside me.

The upperclassman shrugged. “Maybe he knew somebody in a high place. I heard the order came from the mayor’s office.”

“But he doesn’t know anybody in the mayor’s office!”

The upperclassman shrugged again. “Maybe somebody took pity on him. I don’t know. Point is: you can knock on his door until your knuckles bleed, it’ll make no difference. Apartment’s empty.”

I thought, empty? Then I thought, mayor’s office?!

“Has anybody been in the apartment since then?” I asked.

“Yeah,” said the upperclassman. “How’d you know that? Maintenance crews have been fixing the ducts in his ceiling, I’ve heard. Lucky coincidence he isn’t around to deal with all of that disruption.”

“Yeah,” I said, looking at the door. “Lucky coincidence, that.”

The upperclassman nodded and walked off. I watched him go until he turned the corner, then I glanced at Ezer’s door one more time, before heading back to my own apartment.

I sat on my bed, reading Rachel’s letter over and over, and glancing at the clock. That’s when I heard heavy boots and what sounded like a ladder in the corridor. These noises entered Ezer’s apartment and soon hammerblows started to resonate through the pipes above me. The pinprick of light on my wall darkened as a shadow pressed against it. I could feel eyes on me.

Fine, I thought. Time for a walkabout. Let’s see what Rachel meant by looking over my shoulder. I pulled on my uniform jacket, and stepped out into the corridor.