The True Meaning of Smekday Reviewed 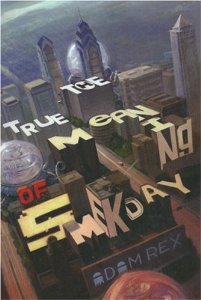 It isn’t often that a book surprises me. Generally, I don’t let them. I tend to do a fair amount of browsing before I buy books in bookstores; I listen for recommendations and occasionally I look into a popular series’ fan fiction before I tackle the book itself.

Erin, however, obtained a copy of Adam Rex’s debut novel for middle grade readers The True Meaning of Smekday based on a recommendation from Rebecca. Despite my love of books for young adults, this story would not have leapt off the shelf at me. Although published by Disney Hyperion, it has not had the buzz of, say, Rick Riordan’s Percy Jackson series (though I recall that Riordan did speak highly of Smekday). Even if I had picked up this book, my first impression would have been that it was a whimsical road trip of a story featuring a eleven-year-old girl and her buddy-buddy alien. In fact, this was what I got, but in addition to that, I was presented with a story containing considerable emotional depth, a sage understanding of the foibles of humanity, a reaffirmation of the human spirit, aliens named Gorg, and a cat.

The story is told from the point of view of Gratuity Tucci (‘Tip’, to her friends), who has been asked to write an essay entitled ‘The True Meaning of Smekday’. In this essay, Gratuity looks back on her life two years beforehand, soon after a race of squat, eight-legged, fish-scented aliens called the Boov subjugated humanity and renamed the planet Smekland in honour of their glorious, all-conquering General Smek.

Gratuity is initially reluctant to share her experiences but, at the encouragement of her teachers, she talks about the day the Boov decided to move the human race onto various “preservations” (the United States was oh so generously given Florida on which to house its 300 million inhabitants). Rather than accept a ride in one of the rocket pods the Boov provided, Gratuity decides to take her mother’s car (she knows her mother won’t object), and drive the way. Unfortunately, she soon discovers that this isn’t possible, as the Interstates have all been blown to smithereens. Worse, Boov patrols are still shooting unauthorized travellers (possibly to warn them away from the destroyed Interstates).

Taking refuge in an abandoned mini-mart with her cat named Pig, Gratuity encounters a lone Boov who has been sent out to perform maintenance on a nearby “antennae farm”. After dealing with the initial tensions, the Boov, who has named himself J.Lo, agrees to fix up Gratuity’s damaged car (in the process, making it able to fly). He then invites himself on her road trip to Florida. Thinking that having a Boov by her side would help her avoid the Boov patrols, Gratuity reluctantly agrees, and they go to Florida. And that’s how she learns that friendship is behind the true meaning of Smekday. End of story.

Except, that it isn’t.

The contest committee selecting the best essay on ‘The True Meaning of Smekday’ encourages Gratuity to tell more of her story, so she describes how she and J.Lo went to Florida, only to find that the Boov had changed their mind and were now shipping the humans in the United States to Arizona. Worse, J.Lo hasn’t been upfront about why he’s tagging along with Gratuity. Turns out he’s wanted by the Boov, and hopes to hide among the humans. But by now, Gratuity has come to understand the value of having what friends she can, so she hides J.Lo as she heads off to Arizona.

Gradually, as the contest committee encourages Gratuity to share more of her story, and when Gratuity realizes that the final version of her essay will be placed inside a time capsule, not to be opened until a hundred years later, she opens up. She tells the full story what really happened, and we come to understand why she’s been so reluctant to share. For instance, the reason the eleven-year-old Gratuity knows her mother won’t object to her taking the family car is because Gratuity’s mother was abducted by the Boov, days before the invasion. With J.Lo’s help, she learns many of the Boov’s secrets, and is present when the alien invasion plot takes a rather complicated turn. When the Boov’s mortal enemies (and the mortal enemies of all sentient beings in the galaxy), a violent new alien race, all of whom are named Gorg, show up to try and take Earth (I mean, Smekland) for themselves, Gratuity is front-and-centre in a bizarre struggle that the humans themselves are a sideshow to.

I hope that with this summary above, I’ve given you some idea of the whimsical nature of the plot of The True Meaning of Smekday. What I’m unable to do is give you a full sense of brilliance of the storytelling on display here. Many places in the story are laugh-out-loud funny, and the banter between Gratuity and J.Lo is a highlight. Author Adam Rex includes a number of action scenes to keep the story moving, not to mention random touches of weird that keep the readers on their toes. However, the story is a lot deeper than one might initially give it credit for. At its foundation are real and very strong emotions, such as Gratuity’s despair when her mother is taken by the Boov, and her anger that J.Lo unleashes when he inadvertently brings the subject up. Adam Rex also demonstrates a keen understanding of the human psyche throughout the novel.

Again and again in The True Meaning of Smekday you see examples of humans living down to expectations — even in moments of crisis when their failures are the worst — and examples of one or two humans who surprise you and themselves by rising above their limitations, proving with their presence that the human race is still worthy of saving. This is particularly on display during a lengthy stop-over Gratuity and J.Lo make to Roswell, New Mexico, during the height of the Boov/Gorg conflict.

Here, J.Lo and Gratuity meet a number of UFO enthusiasts as well as a 90-year-old native-American, former U.S. Airman nicknamed Chief Shouting Bear (in reality named Frank), who actually witnessed what really happened in Roswell in 1947. Of course, the former don’t quite get along well with the latter. Adam Rex has a lot of fun with these people (you’ll chuckle over how easily Gratuity is able to disguise J.Lo to stop them from asking difficult questions), but they all respond in different ways to the crisis, and each has a character arc of their own, with some pulling together against the new and rising threat, and some falling tragically. Of particular note is the character of Vicki, a flaky UFO-worshipper who, when you strip away her desire to mother the heck out of Gratuity and J.Lo, reveals herself to be a frightened middle-aged woman who has been pushed to the end of the rope of her beliefs (her aliens were supposed to be nice). The realization and what comes of it makes Vicky both an extremely ugly character and a sadly sympathetic one at the same time. Similarly, once J.Lo and Gratuity make it to Arizona, they see the foibles of the United States of America as if in concentrate, dealing with a bureaucracy that just won’t die, witnessing racists who will not learn from the great Boovish cluebat, but also experiencing many people’s generosity of spirit as everyone struggles just to adjust to all of the changes.

The resolution of the story is particularly well done. Plenty of clues are placed throughout the tale so that its emergence doesn’t seem unnatural or tacked on, and the action scenes surrounding it are handled with aplomb. The pay off of it all is delightful.

Of all of the elements of this novel, Gratuity is the one who pulls it all together and makes it work. She tells the story in the first person as a thirteen-year-old looking back on her eleven-year-old self. Her voice is authentic, and yet the girl seems wise (and a little cynical) beyond her years. She is a delight to read, both as narrator, and as the girl behind the wheel talking to her new friend J.Lo. The alien J.Lo is a brilliant character in his own right, a perfect mixture of arrogant science geek, and young innocent. This is a being that can rewire a broken car so it floats on air (and has to be steered using the car radio’s volume controls), but whose alien misunderstanding of the human idiom causes no end of fun problems. And though he shares his species’ arrogant presumption about their rights to Smekland (Earth), by the end, he makes a number of critical decisions that show utter loyalty to Gratuity and her cause, and it is a testament to Rex’s skills that the change comes wholly naturally.