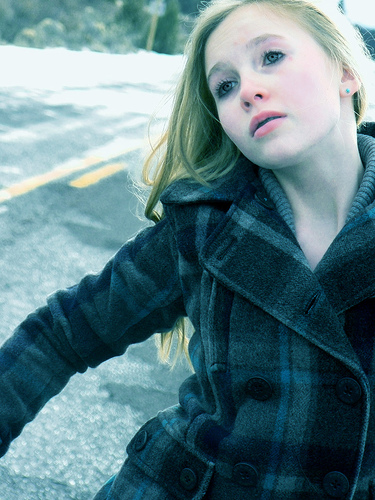 (The picture on the right is entitled Cold Day and is by Drew Herron. It is used in accordance to his Creative Commons License.)

At the back of my mind, I’ve been thinking about a sequel for The Dream King’s Daughter, and recently this scene popped into my mind. I had to get it to paper before I went back to work on Icarus Down.

I realize it’s probably unwise of me to start writing a sequel of a story I haven’t yet sold — although this is how Fathom Five and The Young City came to be back when The Unwritten Girl was Rosemary and Time. I hadn’t yet been published, yet, and other authors have warned that the failure of the first book in a series leaves orphaned tales following, but I needed to know what happened next in Peter and Rosemary’s stories. And while I haven’t crafted sequels to any story since, the questions remain. Only Icarus Down seems immune, but that could be because the first story hasn’t been finished yet.

So, how does Perpetua handle taking over the reins of Earthenhouse’s company and dealing with humanity’s response to the acknowledgment of the goblins’ existence? That’ll be covered in The Day Boy. And what does Aurora do, now that she knows who she is, what she is, and what she’s capable of? That story is tentatively entitled The Nightmare Queen.

As I said, I’ve been mulling the ideas behind this story for a little while, now, asking some basic questions, like what would the world be like if there were no nightmares? And this is one scene, between Aurora and her psychologist mother Dawn, that has come to mind:

“Mom,” said Aurora wearily, “Polk and I are just trying to live a normal life. I can’t skip classes every time you have a theory.”

Dawn gave her daughter a wry grin. “Do I need to remind you yet again that I’m too young to be a grandmother?”

“Mom!” Aurora rolled her eyes. “Polk and I are being careful and everything; don’t worry!”

Dawn tousled Aurora’s hair. “Sure, daughter. Not to worry.”

Aurora frowned. “You called me out here. What have you found?”

Aurora’s question sent Dawn rustling through her purse. “Yes! There is something going on, and I can prove it,” said Dawn. “Look, see!” She handed Aurora a leather-bound notebook. Aurora frowned as she flipped through the pages.

“This is your appointment book,” she said, holding it up.

“But look at the appointments,” she said, shoving the book at Aurora. “I haven’t been able to get any appointments in weeks. Now that might be the peril of returning to practise, but look at the cancellations. I’ve circled them in red.”

Aurora looked up, horrified. “You marked up their appointment books?! Mom!”

“It’s bad, Aurora,” said Dawn. “We’ve lost half of our clients. People aren’t coming in for therapy to deal with their bad dreams anymore, because nobody’s having any more bad dreams.”

“So?” said Aurora, relieved when her mother finally took the book back.

“But think of what’s happening throughout the world,” Dawn went on. “The political situation in the Persian Gulf, people fighting all the time, crime rates rising, traffic accidents, all of those people getting killed doing those stupid extreme sport things. What if they’re connected?”

Aurora raised her hands, trying to calm Dawn down. “I know it’s all weird and scary, Mom, but that’s the way the world is, sometimes. Politicians are stupid. People do stupid things. It doesn’t have anything to do with me.”

“Not you, dear,” said Dawn, touching her cheek. “But something is wrong.” She frowned, her brow furrowing. “I-it’s as though everybody has lost their inhibitions…” Then a thought struck her and she shook her head. “No, not their inhibitions; they still have those. It’s…” She looked at Aurora, her face alert. “It’s fear. It’s as though we’ve all lost our fear.” She shoved the appointment book back in her purse and started to rummage around inside.

“Fear is a perfectly healthy emotion,” Dawn snapped. “In the right amounts, it warns us, it keeps us from doing anything stupid. Speaking of stupid, where are those keys?” She knocking loose a wadded-up bunch of kleenex before pulling out her car keys. She looked up. “Now, where did I park? Oh, yeah: there.” She clicked in frustration as she stared across the highway at her car parked on the shoulder. Six lanes of traffic breezed between them. “Damn. And I have to be across town in thirty minutes. Oh, well.”

She turned to Aurora. “I’ve got to go. Look, it all has to be connected, somehow; the changes to the dream state, and people’s behaviour. Something happened, and it’s getting worse.”

Then she stepped off the curb and strolled towards her car.

Dawn turned and, walking backwards, called out to Aurora over the sound of honking horns and screeching tires. “Find Matron. Tell her something’s wrong!”

A car swerved around Dawn, its horn blaring. The noise shook Aurora from her freeze. She ran towards her mother, only to be brought up short by a tractor trailer sounding its horn and passing in front of her. Aurora choked on the dust in its wake. “Mom!”

“She’s the only person I know with experience in the dream world that we can talk to right now,” Dawn yelled, nearing the median. “She’s the only one that might have some insight into this. She can get the other Dream Lords in to investigate. Tell her she has to hurry, or things are going to get worse.”

Aurora danced at the edge of the roadway, trying to find a gap between the cars to run out. Then a horn bellowed, and tires screeched. Aurora looked up. A cement truck barrelled forward, its wheels locked. She could see the driver inside, standing on the brake, his eyes wide as the gap between the truck’s fender and her mother narrowed by the second.

Aurora screamed when she heard the fleshy thump.

As always, comments are welcome.