Rob Anders Brings Out the Dead 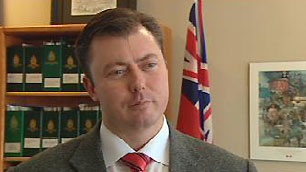 Remember the fun people had when Joe Volpe started putting together a run for the Liberal leadership and supporters may have used children as young as eleven to contribute funds to his campaign, thus circumventing campaign financing laws? I definitely recall a parody web site set up to congratulate Volpe on really motivating the youth vote, but hey, at least he didn’t use dead people.

From Accidental Deliberations, I learn the following from the Hill Times: apparently to protect lightweight MP Rob Anders, the Conservatives set up a vote within the riding, polling party members on whether a nomination battle was needed. How did it go?

The council last year deflected an earlier attempt by members of the association to schedule a nomination meeting, using a controversial poll of all the party’s incumbent ridings. The poll, billed as a new element of the party’s policy of shielding Conservative MPs from nomination challenges, asked members to mark mail-out ballots and return them if they wanted a riding nomination.

Members were told that unreturned ballots would be considered votes against nomination meetings and no riding, including Calgary West, met the required threshold of two-thirds support.

The Calgary West rebels say ballots that were sent to a handful of deceased former members and went unreturned were included in the count, a point acknowledged by Anders’ supporters.

Well, I always suspected Anders had an ear for the zombie vote, and now here’s proof.

Seriously, though, I’m reminded of an episode of The Simpsons showing how Homer handles prayer: “God if you want me to eat this, send me no sign whatsoever.” (pause) “All right, then!” (omnomnomnomnom!)

The ballots sent to deceased party members and accidentally counted — something which Anders supporters acknowledge, note — are really only a part of the problem. Notice how the Conservatives are using the equivalent of negative billing in order to extract the ‘democratic’ outcome they want. Remember when the cable companies put a bunch of new stations that nobody asked for onto our televisions and made it our obligation to say something or else we’d be billed for them? Remember how angry we got about that?

For those who have thrown up their hands at the system and have resolved not to vote, this is something you need to watch out for. As you can see above, the Conservatives not only don’t care about the fact that you’re not voting anymore, it would seem that they are interested in setting up a system that takes advantage of your frustration. You of all people know that silence does not equal consent, but that’s not how the Conservatives have chosen to interpret this result.

That’s a sort of arrogance and underhandedness that goes beyond that of the Liberals of old.