Out of the Mouths of Four Year Olds 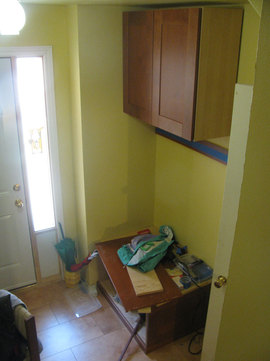 So, as you know, we’ve been doing some repainting and minor renovations of our house. After the kitchen, our efforts have focused on the front foyer. We ripped out the cramped front closet, patched the walls, ceiling and floor, and repainted everything in the sunny yellow we’d chosen to go over Martha Stuart’s “first crocus”. Overall, I’m very pleased. Removing the front closet has created a minor emergency in terms of storage space, but has helped make the foyer look far larger and more inviting.

Recently, we set about replacing the front closet with an upper cabinet from Ikea (just like the cabinets we added to our kitchens), and a custom-built (i.e. by us) storage bench to go beneath it. Add a pair of lights and a line of coat hooks, and our hope is that we should have a comparable amount of storage without compromising the new, airy space.

Building the box required a lot of cutting. I bought a 3/4 inch, 4x8 sheet of plywood to provide the frame, had Home Hardware cut it to spec, and then set about screwing the whole thing together. Lots of screwing. I screwed the sides into the wall studs, I screwed the cladding on top and to the sides. I screwed in the braces. In summary, my hands hurt. It was heavy afternoon’s work, and very public given that the kids were home, and going in and out the front door to play with other kids during some very beautiful days to be outside.

The fact that this renovation has been a bit of a disruption, albeit an exciting one, for Vivian was brought home by the fact when she said to her friend Natalia, as well as any other kid or parent who would listen, that “you can’t come over to my house right now. Mommy and daddy are screwing. 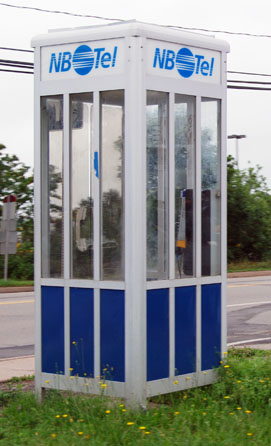 In my ongoing search for the best phone deals, I ended up moving over to Bell Canada for my home and mobile phone for a while, until I grew unsatisfied. I found that the quality of my home phone service was lacking, and that the promised long distance bundle wasn’t giving me the savings I had hoped for. Finally, Rogers stepped forward with a decent offer, and I decided to make the switch. Right now, I’m stuck with Bell for my mobile service, thanks to my long term contract, but my home service is now through Rogers. For the most part, I’ve had no complaints.

But Bell’s reaction to my betrayal has been interesting. Ever since departing, I’ve received… letters, from customer service representatives, and even apparently from Bell VPs, all saying roughly the same thing: “we miss you! Don’t go! What can we do to bring you back?”

The similarities between these letters and desperate letters sent by a scorned lover are starting to become uncanny. First there’s the matter of the quality of the paper. The one I’m looking at now features a premium envelope, and the sort of cardstock you’d typically see on wedding invitations. It’s personally addressed (although it features no return address), and comes with an actual stamp. The front of the card says, “James Bow, we could never forget about you.”

And that’s sort of creepy. If this keeps up, I’m half expecting to receive letters from Bell containing pictures of various executives lying naked on bearskin rugs.

I can’t help but wonder if Bell could take the money they’re spending trying to bring me back as a customer and spent it on lower my rates and providing better service, if they could have saved enough to keep me as a customer in the first place, and still make the same amount of profit. Don’t get me wrong: it’s sort of nice to have this attention. But it does feel a little after-the-fact.