There is no spoon...
(Amy's Choice Reviewed) 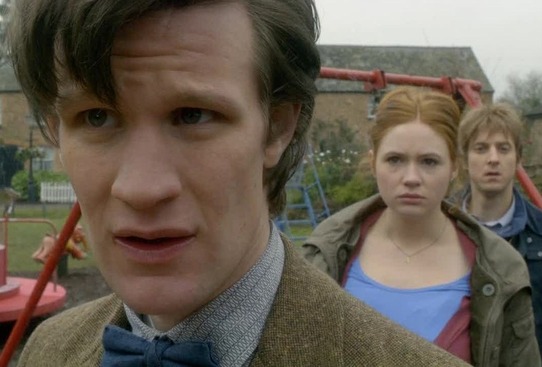 If you’ve just finished watching the latest Doctor Who episode to debut in Canada, Amy’s Choice, you might want to take a moment and watch it a second time. Seriously. You might enjoy it more if you did.

The story, written by Simon Nye (better known for the late eighties British comedy hit, Men Behaving Badly) has been given a pretty hefty job in terms of moulding the thematic elements that back the season spanning plot. It is a carefully constructed character study that sets up terrible decisions the Doctor, Amy and Rory will have to make before the season is through. You will marvel at the little details that are inserted, that almost slip by unnoticed. It is laden with carefully constructed subtext that is a joy to pull apart. Indeed, so much is going on in the background, the episode almost fails to function on its own storytelling merits.

A full spoilery review follows after the break.

It’s five years after Amy and Rory’s time on the TARDIS. The couple is married and expecting their first child. A very pregnant Amy is with her husband when they hear the telltale wheezing-groaning of the TARDIS engines, and along comes the Doctor to pay the loving couple a visit… Or does he?

Except that the Doctor, Amy and Rory wake up again, five years in the future, with Amy still pregnant, each convinced that they’d just dreamt that they were back in the TARDIS. Nobody knows which is the dream and which is real, and things are about to get very complicated.

Then, back in the TARDIS, the ship loses power…

Cue the Dream Lord (played well by Toby Jones) to set down the ground rules. The little meanie has set up a game. One scenario is a dream, and one isn’t. The goal is to choose which one is which. Choose to die in the dream world, and you’ll wake up, none the worse for wear. Choose to die in the real world, and it’s your funeral. To make things doubly interesting, a world-ending threat is to occur in both scenarios. To make things triply interesting, this world-ending threat continues while the Doctor and his companions sleep in that world. Both worlds proceed along at the same time pace.

Very quickly, things turn nasty in both worlds. In the darkened and powerless TARDIS, the temperature is dropping rapidly as the ship drifts towards a “cold star”. In Amy and Rory’s comfortably married future, the old folks reveal themselves to be menacing aliens who have decided to come out of their shells. And the Dream Lord taunts the TARDIS crew every step of the way.

Of course, very quickly, the story becomes more than just about the dreams. It becomes a question of which world does Amy and Rory prefer? Do they want to carry on in their TARDIS life, or do they want to be comfortable and married and expecting a baby? We know what the Doctor prefers; he calls the married life of Amy and Rory a horrible nightmare, and further insults Amy by calling her life “dull” (her response — faking going into labour, thus giving him the worst shock of his life — is truly priceless). Rory sort of likes the married life as well, and in the TARDIS scenes, encourages Amy to start getting serious about their relationship. Clearly, writer Simon Nye got the memo from Steven Moffat about this season’s themes of accepting responsibility and growing up, and he lays it down a little thick.

On first viewing, I had some concerns about the story; primarily that it seemed to lack the disorientation I’ve come to expect from stories about dreams. Also, the threats in both dream worlds feel rather pencilled in; both tales ended up distracting from each other. The aliens are suitably creepy and gross, and the scenes of the downed TARDIS, as well as the “cold sun” itself, are suitably spooky, but the motivations of the aliens aren’t fully explained, and the science of the TARDIS scenes is a little wonky (which Simon Nye tries to duck with the Turkey City Lexicon tactic of “you can’t fire me, I quit”). Of course, in the end, there’s a valid plot reason for both of these “problems”, but this is something I appreciated more in the second viewing. In the first viewing, I was left a little unsatisfied; I felt I wasn’t able to invest as much interest as I would have liked in both tales, and in the end I felt as though that investment was wasted.

Second and third viewings will also allow you to see the little details Nye and director Catherine Morshead put into the story. Rebecca Anderson pointed out to me that in both the TARDIS and married scenes, the Doctor and Amy are colour coded: primarily a blue motif (note the bow-tie and Amy’s dress) in the TARDIS scenes and red in the marriage scenes (again, note the bow-tie and Amy’s cardigan). It’s been suggested that this is a reference to the Matrix’s red and blue pills that one takes to either accept the dream world, or throw it off. Note also that, in both sequences, Rory appears in neutral colours. This may be because he’s the choice that Amy has to make, not the red and blue worlds.

And the three principles in this story take the material and run with it; Matt Smith in particular. Again, the scene where Amy fakes going into labour in order to teach the Doctor a lesson is played perfectly, but there is also the scene where Amy makes her terrible decision.

The episode’s finest moment comes when the old folks aliens attack Amy and Rory’s home. Rory gets a glancing blow from the alien’s dissolving gas, and crumbles to dust in Amy’s arms. The acting that Karen Gillan puts on as Amy is overwhelmed by grief is something to behold, as is the Doctor’s horror and frustration at not being able to do anything to help. But that isn’t the finest moment.

When Amy then decides to end the game here, that this is either the dream world, or it just doesn’t matter if she dies, the Doctor reluctantly goes along with her. The finest moment comes when the Dream Lord appears as Amy gets into the van with the intent of crashing it into her own house. Matt Smith is very careful not to look the Dream Lord in the eye, and the Dream Lord’s expression says volumes. It says “you’re not sure, are you? You’re not sure she’s making the right choice, but you’re not going to stop her, are you? You’re letting her take this out of your hands.” Not a word is said here, but both actors deliver so much in that one moment.

The rest of the story almost comes as an anticlimax: the Doctor’s realization that both worlds are a dream, and that the Dream Lord was, in fact, the personification of the Doctor’s dark side, thanks to an accidental infestation of psychic spores, come across as rather pat. Many in fandom (myself included) will jump at this little detail and suggest that the Dream Lord is the Valeyard, and it doesn’t feel right that this major (in their minds) detail is just thrown out there and discarded.

But that really isn’t the point of this episode, is it? The dreams weren’t relevant, and neither was the Dream Lord. This story was about the choices each character had to make, and what they learnt about themselves in the process. Amy learnt just how much she loves Rory, and their relationship is now secure. The Doctor has perhaps learnt a bit about himself, and just how much he fears loneliness (his decision to go it alone after Donna now seems even more of a mistake).

But lastly and most importantly, Amy’s Choice revealed something critical about Amy to the Doctor. In Flesh and Stone, the Doctor learnt that the cracks in time all centre around Amy and Rory’s wedding. Essentially, he learnt that the universe revolves around Amy.

In Amy’s Choice, he learnt that Amy will destroy her universe if Rory can’t be in it.

While the Doctor might understand that choice, and even think Amy’s choice to be the right one, you have to think that he’s at least a little scared about the implications.