The Road to Fitness 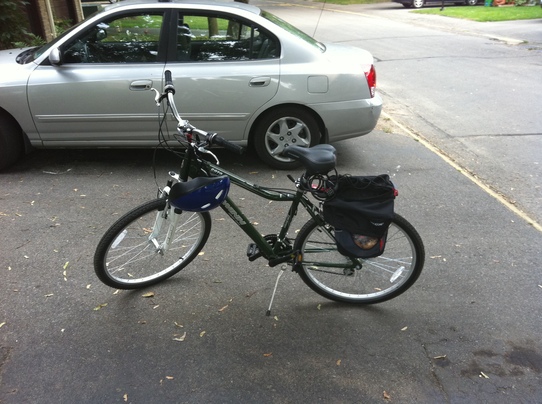 For the past few years, now, I’ve been struggling to keep my weight down. As hard as I have to work in order to keep after two toddlers, I still lead a pretty sedentary lifestyle. My attempts to go down to the gym haven’t worked out as well as I’d hoped.

But earlier this week, we happened to be in Canadian Tire when Erin suggested I try out some bikes. Earlier this year, she’d gone down to Ziggy Cycle to get herself fitted for a proper bicycle (replacing a found model that was built for a young teenager), and she’s used it a number of times on her morning commute to do her writing.

I could certainly see the merit of owning a bike of my own. I was tired of hopping into my car and burning gasoline just to pick up a few litres of milk. I wouldn’t have to go very far in order to improve my health and reduce my household costs. So, after looking around and testing a few models, I settled on one that felt comfortable, and bought it on the spot.

It has been eighteen years since I’ve last ridden a bike. They say you never forget how to ride, but what they really mean is that you don’t automatically fall over when you get on a bike for the first time in almost two decades. You still have to re-learn your sense of timing and balance, and you spend far too much time wobbling around, trying to keep control over the thing. So, for the first week, I’ve stuck to the private roads of our townhouse complex.

This is also the first bike I’ve owned with gears: 21 in fact. And they do make a difference. After some practise, I’ve gotten used to changing gears while pedalling, and I haven’t dropped a chain yet (fingers crossed). I still have to learn which are the right gears, however. Downshifting while climbing a hill takes me from pushing a gigantic stone up an incline to something I’d call “imaginary gear”. My legs are pumping, and it’s not very hard at all, but forward progress is so minimal, it’s a struggle to stay upright.

Yesterday, I ventured out of the townhouse complex for the first time, making a run to my local Sobeys to pick up groceries — a run I would usually have made by car, before. It went well. Despite some white knuckle moments resulting from my inexperience, I got to the store okay, and managed to haul back buns, english muffins, cole slaw and a six-pack of soda up the hill to our house. I was quite out of breath at the end, but it was still an eminently achievable run. i expect that as I do this run more often, before the snows come, the ride will come easier, and I’ll be healthier and richer as a result.

And Now For Something Completely Different

I give you: Nora removing raisins from their box: