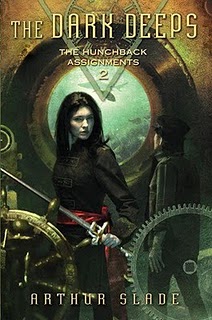 Arthur Slade is flying high with his young adult series of steampunk novels called The Hunchback Assignments. The second book of the series, entitled The Dark Deeps will thrill readers of all ages with tales of Victorian derring do as hunchback shapeshifter Modo works his way through a complicated plot for Queen and Country. Taking inspiration from H.G. Wells and Jules Verne, The Dark Deeps is as much a celebration of fantastical Victorian literature as it is a straight up spy adventure. There’s humour, romance and lots of action, and if you haven’t read it, you should.

Recently, Arthur Slade guest blogged over at Cynthia Leitich Smith’s web site Cynsations, where he described what made certain novels ‘steampunk’. Among his criteria are such rules as:

Basically, be aware of the politics and the attitudes of the day. Remember what was possible and what wasn’t and be sure to incorporate these limitations into your fantastical machines so as to give your science fiction or fantasy that Victorian feel and, voila, you have steampunk.

I hope Arthur won’t mind if I dispute him a little on this (I doubt that he will; he’s a gracious individual and, besides, what fun is there in being an author if you can’t have a little author-to-author argument once in a while), but I would argue that the steampunk genre is more than just about taking the Victorian era and making it work in your science fiction or fantasy story. Yes, the steampunk novel is possibly defined more by the aesthetics of an age than any other genre in fiction, but it isn’t as simple as that. Genres in general tend to be amorphous and hard to nail down at the edges, and steampunk is no different.

As a genre, steampunk counts as its seminal works novels written in the 1960s and the 1970s, but as a general term, it was coined by K.W. Jeter in 1987 in a letter to Locus magazine wherein he said:

“Enclosed is a copy of my 1979 novel Morlock Night; I’d appreciate your being so good as to route it Faren Miller, as it’s a prime piece of evidence in the great debate as to who in “the Powers/Blaylock/Jeter fantasy triumvirate” was writing in the “gonzo-historical manner” first. Though of course, I did find her review in the March Locus to be quite flattering.

Personally, I think Victorian fantasies are going to be the next big thing, as long as we can come up with a fitting collective term for Powers, Blaylock and myself. Something based on the appropriate technology of the era; like “steampunks”, perhaps…

At the time, steampunk novels married the sensibilities and storytelling styles of such Victorian novelists as H.G. Wells and Sir Arthur Conan Doyle to the science fiction or fantasy novel, but steampunk really only gained recognition as a genre when William Gibson and Bruce Sterling — two of the founding fathers of the cyberpunk genre — co-wrote The Difference Engine. In that book, Gibson and Sterling speculated on an alternative history where a steam-powered mechanical computer, proposed by Charles Babbage, was actually built, and thus the Information Age in which we now live took root closer to the dawn of the Industrial Revolution.

While steampunk has been embraced for its Victorian sensibilities (where men were men, women wore long skirts and the sun never set on the British empire), I think something more subtle is at work here. And you see it in how Arthur Slade breaks his own criteria in naming one of two examples of young adult steampunk fiction.

One of his two examples is Kenneth Oppel’s Airborn, an award-winning young adult novel set in an alternate Earth where lighter-than-air airships are the primary means of long distance travel. In his first book for the series, Oppel marries swashbuckling adventure of Treasure Island with the class struggles seen in the movie Titanic.

But here’s the thing: Oppel’s setting isn’t Victorian. It quite possibly isn’t even Edwardian. He never tells us what year the story takes place in, but the heyday of the Zeppelin was in the late 1910s and the 1920s. What it does offer, however, is the incongruity of yesterday’s technology being advanced well beyond what was achieved in the real world.

So a more accurate measurement here may be that steampunk is about the incongruity of technologies. Consider the work of British author Philip Reeve.

Phillip Reeve’s Larklight series is indisputably steampunk, written very much in the vein of H.G. Wells and sharing a lot of territory with the role playing game Space: 1889. You have the British Empire among the stars, Victoria is on the throne, and the Crystal Palace is about to become a gigantic robotic spider intent on stomping Tokyo (after first getting through with London). But what about his earlier work, the Mortal Engines series?

The Mortal Engines books may have been written for a slightly older audience and it is set in Earth’s distant future rather than its recent past, but it shares Larklight’s adventurist sensibility and incongruity of technologies. In the Mortal Engines sequence you have gigantic hulking cities — parodies of cities we know and love today — roaming the remains of Eurasia and the arctic, consuming each other in a practise known as “municipal Darwinism” (tip of the hat to the Victorians there). You have humans able to incorporate futuristic engines and weapons into their cities while still powering them with coal and still struggling to recapture the concept of fixed-wing flight. I put it to you that Reeve’s Mortal Engines’ series is as steampunkish as his Larklight series, and that Larklight only drops the veil.

And, even if I do say so myself, I think the same applies with Icarus Down. Even though the story is set in Earth’s future, centuries after Queen Victoria’s death, you have people who were once a space-faring society dealing with conditions that render radio and television communication impossible. How does a society that is only two generations away from the Internet and still basically functional cope with the fact that a centralized power grid cannot exist anymore and that all the street lights have to be individually battery powered — or possibly even gas lit?

Certainly, Icarus Down is steampunk in the way that The Young City is not. In the latter tale, modern young adults fall through a time gate and end up in 1884 Toronto. That’s Victorian. But there’s no incongruity of technology. Yes, we have modern protagonists dealing with culture shock and a world without cellphones and the Internet, but they’re dealing with what is, and not what could be.

Our society is, more often than not, defined by our technology, and our technology is defined by the compromises it makes between what is possible and what is desired. This is why breakthroughs change the world, as people embrace what becomes possible. But what if the breakthroughs happened out of order? What if we ended up embracing certain aspects of modern civilization, while being forced to compromise with aspects of something older? What variation would we create in ourselves?

In this respect, I would suggest that any novel which shows people struggling to push the technology of yesterday into supporting the society of tomorrow falls under the classification of ‘steampunk’. That broadens the definition to encompass books that are already considered to be in the genre.