The Weirdest Blast From the Past 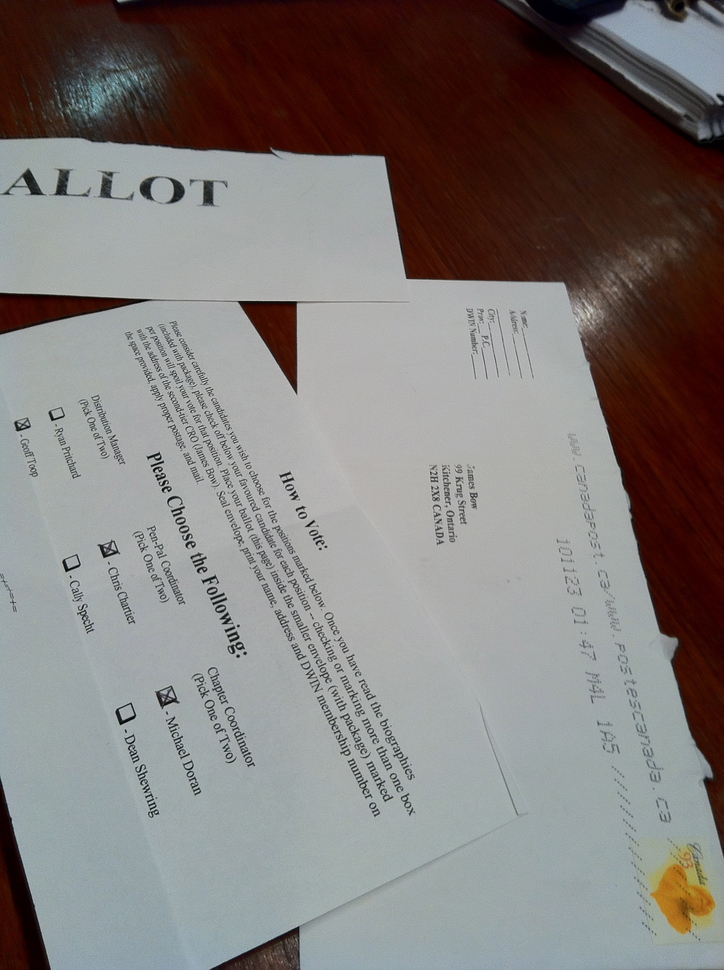 This may not look like much, but it’s one of the weirdest pieces of mail I’ve ever received, if not the weirdest.

Earlier today, my father called me and mentioned that I’d received a letter at his place. Note that I haven’t lived at his place for over thirteen years. He also said it was something related to the Doctor Who Information Network, a Doctor Who fan club that I still belong to, but which I haven’t been active in for years.

We happened to meet up later, and he brought the envelope over, and after opening it, I realized what it was.

Back when I was much more involved in Doctor Who fandom, I served as a returning officer for one of the fan club’s elections. We’d put together a complicated process of sending out ballot packages with the club’s magazine, with detailed instructions on how to fill out the ballot, stuff it in an envelope marked “BALLOT” and stuff that into a return envelope that was addressed to me. Doing it this way, we were able to ensure that only eligible DWIN members voted, while at the same time preserving the principle of a secret ballot.

I’m wracking my brains trying to remember just what year this election was held, and I’m coming up blank. I think I might have been in university at the time, which would make this ballot at least sixteen years old — two years shy of being able to vote! As I recall, back then, I was a lot more of a process geek (and that’s saying a lot), which explains how I ended up roped into this. The election culminated in my parents’ dining room, with other DWIN scruitineers confirming the eligibility of voters, and then helping to count the ballots themselves.

The outer envelope has no return address, which would automatically disqualify it anyway. The stamp appears current, and the post mark suggests that the envelope was processed on November 23, 2010 — the 47th anniversary of Doctor Who itself, which makes the whole thing even weirder.

If whoever sent this ballot is reading this, I’d like to thank them for the memories.