The Year of Plain Kate 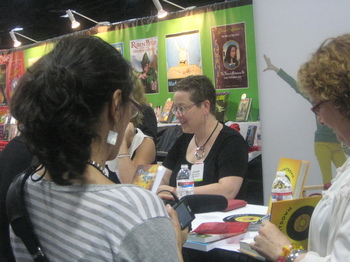 For us, it’s been a pretty good year. The family got a chance to visit New York (my first time) and Washington DC (my second). We’ve been busy promoting Erin’s new book, and it’s received a lot of warm reviews and been given a lot of support. It looks like it’s going very well. Earlier today, it was announced that Plain Kate had been placed on the shortlist for the Fantasy and Science Fiction (Young Adult) category of the Cybils Awards, quite an honour. Hopefully, more success is in Plain Kate’s future.

Erin’s writing has gone well. She recently finished a draft of book two (tentatively entitled Sorrow’s Knot) and is back into doing her poetry as well as shepherding ideas for the third book. Investing in an office of her very own proved to be a good decision, as it has not only given her incentive to work, it’s given her a space free of kids and other distractions.

For me, I’ve been fortunate enough to see the kids grow, for Vivian to enter senior kindergarten in the public school system, and for Nora to turn two and start to communicate with me in words. My own writing has gone well, with two drafts of Icarus Down finished and two non-fiction projects commissioned and completed in a matter of months. Blogging has been lighter than before. I do get the sense that the fad of blogging has faded somewhat. Blogs are no longer the in thing, and those who stick with them are doing so for reasons other than just reaching out to a large audience who happens to be there. Blogs have become more personal and the readerships have shrunk to match.

And perhaps this is one explanation as to why my political posts have faded of late. I may have said all that I think I can say as an amateur pundit, and I’m starting to repeat myself. I am finding politics to be more boring and frustrating as the days wear on, and I really want to occupy my time with things that delight me, like my children, and good books and television shows, and my fiction and non-fiction. Life is too short to be angry or bitter all the time. This will probably be the direction the blog takes in the coming year.

Whatever the case, we have been fortunate to have had the love and support of our friends, colleagues and families. The kids got to see all of their grandparents, thanks to the free babysitting offered by Pat and Eric, and visits by Grandma “Rommey”, Poppa Michael, Poppa Wendell and Grandma Judy. We got a chance to go to Chicago, and twice to Iowa and Nebraska, and the kids enjoyed all of the trips and visits. We look forward to more of these meetings in the coming year.

We are hopeful that 2011 isn’t much different from 2010. We are doing what we love to do, and we very much would like that to continue.

To all of you reading this, I’d like to wish you all a Happy New Year. I hope 2010 was a good year for you all, and that, whatever the case, 2011 promises better things ahead.