Catapults Brought Into War on Drugs 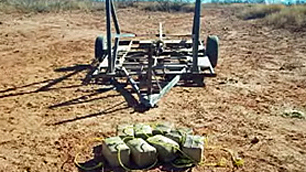 Every once in a while, a headline flashes past my newsreader that I simply have to click on. This is one of those times.

Drug smugglers trying to get marijuana across the Arizona-Mexico border apparently are trying a new approach — a catapult.

What would have been cooler is if the National Guard troops had caught sight on their television screens of the bundles of marijuana flying through the air. Maybe they did…

The three-metre-tall catapult was found about 20 metres from the U.S. border on a flatbed towed by a sports utility vehicle, according to a Mexican army officer with the 45th military zone in the border state of Sonora.

The catapult was capable of launching two kilograms of marijuana at a time, the officer said Wednesday, speaking on condition of anonymity for security reasons.

Soldiers seized 16 kilograms of marijuana, the vehicle and the catapult device, the officer said.

I read this story out loud to Erin, to which she replied, “You know what they should use next time? A trebuchet! Those things can launch things hundreds of powers hundreds of meters.

All I could think of was the smugglers yelling “Pull!”