On Top of Mount Trashmore 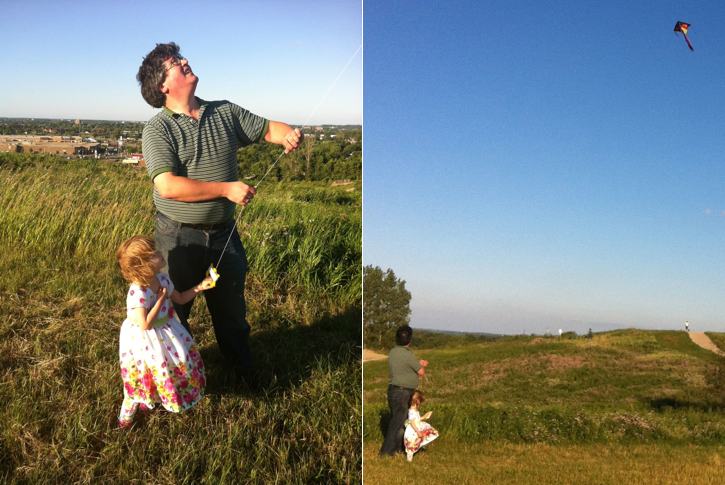 Not, as it happens, all covered with cheese.

Yesterday, Erin, Rosemarie and I decided to drop everything and take the kids to Kitchener’s McLennan Park, one of the highest points in Kitchener. The park is nicknamed Mount Trashmore because — you guessed it — it is the site of Kitchener’s former garbage dump, closed decades ago.

Back when I moved to this city, the mountainous grass-covered pile of trash was a textbook definition of a wasteland. It was named McLennan Park from almost the beginning, after former Kitchener mayor Sid McLennan, leading us to wonder if this was some sort of ironic compliment. Development nearby had been halted when methane had leaked out from the pile and infiltrated a bunch of homes that had been built nearby, with potentially explosive results. However, the City responded by setting up a collector to gather the methane for fuel. The trash pile eventually stopped leaking methane, and development resumed. Pretty soon, people realized that what they had was one of the best toboggan hills this side of winter.

In the past couple of years, Kitchener has done much to turn McLennan Park into a great resource for the city. There are pathways, a playground, a splash park, and spectacular views of the city from atop the big hill. And, as you can see, it’s an excellent place to fly kites. Not a bad legacy for Mayor McLennan, all told.

We took Vivian’s new kite (a gift from Rosemarie) down with us, and it was a most successful flight. Anybody could have flown a kite in that wind, even Charlie Brown. Our kite didn’t hit the ground once, in about an hour’s worth of trying, and I soon had it out to the full length of its string (nearly 200 feet!). I never knew flying a kite could be so fun.

More pictures can be found on our Flickr page.