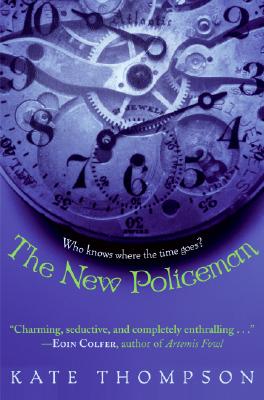 J.J. Liddy is your typical modern day Irish teenager. Between school work, his work on the farm, and his parent’s biweekly ceilis, he’s rushed off his feet. It feels, sometimes, that there just isn’t enough hours in the day, these days. And, strangely enough, he’s right.

Life in the Irish town of Kinvara is getting more and more hectic. Buses are always late, and people are rushing around, trying to get the days’ work done, and always falling short. There’s barely enough time for J.J. to have a social life at school, or engage in the usual country gossip — of which there is still some. J.J’s family isn’t what you’d call traditional, even here in modern day Ireland. His mother, Jenny, steadfastly refused to marry her common-law partner, specifically so that J.J. and his sister could keep the Liddy name.

The Liddy family has, for generations, had a reputation of being flighty and fancy free. They’ve been rich enough to host ceilis (big social Irish dances) every two weeks — a tradition stretching back generations, to the time of J.J.’s grandfather (also named J.J.), held them in the kitchen of his farmhouse. Jenny’s mother also had her daughter born out of wedlock, thanks to a mysterious stranger who vanished without a trace after a whirlwind courtship. It’s been said that the Liddy family has been influenced by the faeries of Tir na n’og, and this even caused the elder J.J. to run afoul of the local parish priest, who one night tried to stop their music, and then vanished without a trace.

This family history comes back to haunt the younger J.J. just as J.J.’s mother expresses a wish, on her birthday, that she just have more time to enjoy life. J.J. keeps this desire in mind as he runs an errand for a woman named Anne Korff, and when J.J. lets this slip, Anne tells him something shocking: there really isn’t enough hours in the day, these days. Something is causing time to drain out of the world and maybe, just maybe, the determined young J.J. might be just the person to stop the leak. However, to do this, he will have to vanish from this world, and travel to a parallel place where time never started.

So begins Kate Thompson’s lyrical young adult novel, The New Policeman. Twisting with all the intricacies of a stepdance, this book ties together the classic legends of Ireland with the world modern day teenagers are quite familiar with. The graceful writing entrances while various plot points from three generations of Liddys come together in a satisfying and surprising whole. Just what happened to the priest the night he confronted the elder J.J. and disappeared? Who was the father of J.J’s mother? What is causing time to leak out of the world?

From the moment I picked up the book, I was captivated by the writing. The prose is both accessible and uniquely Irish. Kate Thompson paints the lives of the people of Kinvara in great detail without bogging the reader down. It reads like a breath of sea air, and is impossible to put down. The character of J.J. is also well drawn — a typical teenager and a sympathetic individual who cares passionately about his parents, his sister, his town, and the unfortunate people he meets along his journey.

If I had a complaint with this book, it’s that Kate Thompson does keep J.J. unrealistically in the dark about the nature of some of the Irish faerie legends — particularly the legend of Oisin — and I would have thought that J.J., being immersed in Irish culture, would be well aware of the implications of said legends. Kate tries to mask some of this plotting by suggesting that the transfer between worlds addles minds — fairy and human alike — but it’s a tad too convenient.

Still, that’s easily forgotten in the sheer verve of the story. The mysteries are well presented and satisfyingly resolved, and you come away from the novel feeling good for having read it. I highly recommend this for any YA library.