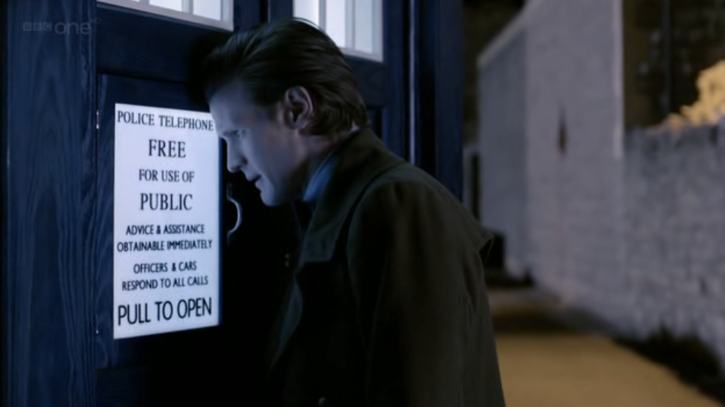 My latest column for the Kitchener Post is now up here, so check out my thoughts about bedbugs. Please note that I don't speak from personal experience...

The latest Doctor Who episode, Closing Time reinforced my conviction that the sixth season of the Doctor Who revival is trying to tell a 26-story arc in just 13 episodes. There's a lot of interesting stuff here that made me like the story, and there's a lot of depth here that just gets alluded to. Things have been glossed over and, while I'm able to keep up on an intellectual level, I can't help but feel that a lot of potential has been left on the table.

Mind you, this is probably the limitation of the medium. Could Steven Moffat have drawn out the Impossible Astronaut/A Good Man Goes to War over the length of the sixth season? Would fans and casual viewers have been patient enough to wait until this time next year for Let's Kill Hitler/The Wedding of River Song to conclude?

But taken on its own merits Closing Time is a treat. It marks a welcome return of James Corden as Clive Owens, and he and Matt Smith's Doctor just light up the screen. And while I've appreciated Moffat's effort to expand the mythos and not rely so heavily on classic series monsters, it's still greatly appreciated to see a piece of Doctor Who history return to our screens for a good, old-fashioned monster thrash. Writer Gareth Roberts was dead on when he said that, as this was to be sold as the Doctor's last adventure before he goes off to die, it would have been a crying shame to completely ignore the history of the program that got us this far. The result was an episode that was just right for the moment, and a very satisfying hour of television indeed.

A full, spoilery review takes place after the break.

You may or may not recall that the Doctor, through much of his tenth incarnation and the early portion of his eleventh, listed his age as around nine-hundred (I suspect, though, that he was being the Time Lord equivalent of Jack Benny). Then, in The Impossible Astronaut, he listed his age as 1,103 before being killed moments later. Then Amy and Rory run into their Doctor again, except that he describes himself, yet again, as being nine-hundred years old.

For the Doctor, since the end of The God Complex, a lot of time has passed. I mean, a lot of time. It's not specifically stated on screen, but writer Gareth Roberts acknowledges that the eleventh Doctor has been on a two-hundred-year-long farewell tour. Lying low. Seeing the sights. And not getting involved.

And, apparently, keeping track of his age, once again. Think about this: in Remembrance of the Daleks, the seventh Doctor listed his age as 953. The tenth and eleventh Doctors take this back to a vague 900. And now, in The Impossible Astronaut, the Doctor lists his age as "eleven hundred and three"? He's counting down, my friends. And that says a lot about what his character is going through. Rather than confront the matter, he's either giving up or he's biding his time. And two hundred years is a long time to bide one's time.

As the appointed time of his death approaches, the Doctor decides to pay a social visit to Craig Owens, and it goes in his usual inept style. Fortunately (or unfortunately, depending on how you argue this and, trust me, it can go both ways), the lights flicker just as the Doctor turns to walk away, and the Doctor knows immediately that something's wrong.

There's a lot going on in Craig's life at the moment. He's a new dad (I'm pleased that Daisy Haggard was able to put in a cameo as Sophie), who is on his own with his young son for the first time. The last thing he needs is for the Doctor to turn his life upside down. But people are disappearing from the local department store. People are noticing a silver rat zipping about. The Doctor can see all the hallmarks of an invasion about to start, and he knows he can't just walk away.

If you haven't seen the series' behind the scenes Monster Files feature on the Cybermats, you should. It does a very good job of describing the hard work the production crew put in to resurrect a classic little monster that hasn't been seen on screen since 1974. But even if you don't take the time, it's clear that the new Cybermat is an impressive creature, and the production crew did a good job upgrading the beast for today's audiences while respecting the original design.

But, of course, the Cybermat would not have nearly the impact without the hard work of director Steve Hughes and the acting talents of Matt Smith and James Corden. I mean, they have to hold a flashing, clicking but otherwise lifeless metal prop and convince the audience that it's actually exerting considerable force as it makes a kamikaze run for its victim's neck. Behind the scenes, Matt Smith was so in the moment that, when he grabbed a pot and bashed the Cybermat, he bashed it so hard, he broke the prop. That's the quality of actor we have on the series today.

Writer Gareth Roberts is clearly a fan of the old Cybermen and is well aware that these monsters are scarier when they have to be stealthy, rather than launching a full frontal attack. The episode plays good homage to Tomb of the Cybermen, while at the same time giving us good laughs in the form of Craig's desperate attempts at parenthood, the Doctor's ability to finagle his way into the personnel department of a store, and the musings of Stormaggedon, Lord of All.

And the episode is also surprisingly sweet. Even though the resolution sounds unbelievably hokey on paper (I mean, Craig saves himself through the power of love? Really?), it works, possibly because Stormaggedon (a.k.a. Alfie) is unbelievably cute, and Roberts knows well enough to lampshade the moment.

Then there's Amy and Rory's brief cameo appearance, which is marvellously sold by Matt Smith. It really shows us how brave his decision was to send his companions home, even though I still fear it was self-destructive. The fact that the Doctor decided to include Craig Owens on his 200-year-long farewell tour illustrates that despite his assurances to the contrary, the Doctor's need for companionship is almost pathological. Note also that the tenth Doctor went on a farewell tour of his own as he prepared for his regeneration. The eleventh Doctor has had 200 years of loneliness. One wonders who else he's visited.

Indeed, I can picture it:

(Martha and Mickey are snuggling in bed. Mickey looks up)

MICKEY: What? Martha, there's somebody looking in our bedroom window.

(Martha sits up, holding the covers to herself. She sees the eleventh Doctor looking mournfully in through the bedroom window).

MARTHA: Wait, is that who I think it is?

(The Doctor raises his hand in farewell)

MARTHA (falls back on her pillow): Oh, no. He's going to do it again, isn't he? (sits up) Look, Doctor, next time you're off to regenerate, why don't you ring the doorbell like a normal person!!

In spite of this, the thing I most regret about Closing Time is that while it is the right episode at the right time, at least two other episodes are missing from the narrative. We need something like a Next Doctor and a Planet of the Dead (or even an Adventuress of Henrietta Street) to show the eleventh Doctor dealing with his decision to accept his death, and wait 200 years for it to happen. While this is probably dangerously close to what Russell T. Davies attempted during the David Tennant specials, it is what the narrative needs, in my opinion, to properly complete the arc started in The Impossible Astronaut and even The Eleventh Hour.

The shift of tone at the very end of Closing Time illustrates this problem. It's supposed to clash, but it is far too clearly something that's been added on by Steven Moffat. If we'd had a couple more episodes between Closing Time and The God Complex to prep this appearance, it would have been seen more as the fulfilment of something and less the grafted on extra that it clearly was.

(And I do have to say that the children's song has gotten incredibly annoying after just two iterations. It was a mistake, in my opinion, that comes across as silly rather than haunting, and the arc would have been better off without it. Although, perhaps with a couple of extra episodes, either to correctly fit this thing in, or at least bash us with it until we're senseless, it could become more effective than it is.)

But serial television always has difficulty setting up long-term story arcs. Babylon 5, The X-Files, even Battlestar Galactica, many of these series simply could not keep up with the gargantuan task of coordinating every subplot, tweaking every episode, so the supra-narrative comes across most clearly. And in spite of the preparation Russell T. Davies made in making fans appreciate the season-long arc, Doctor Who's audience tends to deal more readily with stand-alone episodes, in my opinion. If Steven Moffat had managed to string the plot threads of season six through seasons six and seven, the result may have been extremely satisfying to this fan, but how would the casual viewer have responded?

Add to this the fact that the seventh season of the revival has been delayed until the autumn of 2012, in preparation for an eighth season straddling the 50th anniversary of the show in 2013. It's one thing to ask fans and viewers to wait a summer for a resolution to a cliffhanger. is it fair to ask them to wait a whole year?

Closing Time is the third episode in a row that I quite enjoyed. Overall, the sixth season has been very much to my liking, with only two episodes (The Curse of the Black Spot and Night Terrors) failing to make the grade with me. Now it all comes to a close this Saturday. In a single-episode season finale -- the first the series has attempted since the revival began. Can Moffat tie up all the loose ends? I'll be tuning in to find out.