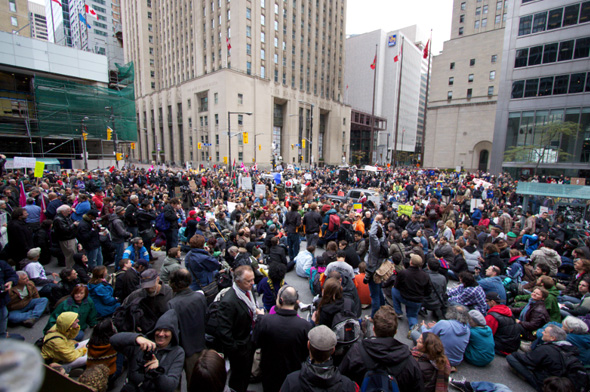 Photo by Tom Ryaboi from BlogTO.

And, amazingly, this columnist at Fox News gets it.

I’m not out protesting, but I can’t help but be impressed at the momentum the Occupy Wall Street movement has maintained. True, it seems to be a protest without policies, a leaderless mass of discontent that, at first glance, seems unlikely to identify the changes it wants to make to society, much less make them.

But it’s not going away. And the reason for it is due to the anger that many in society have had over how things have developed. The rich have gotten richer and the poor have gotten poorer and, for too many of us, hard work does not translate to a better life. And that’s fundamentally unfair.

And while the protests have issued no clear demands, or produced alternatives that we as a society can work towards, they have provided one tremendous benefit to those of us frustrated with how things are: they have shown us that we are not alone. And that alone takes the edge off the frustration, and offers a ray of hope. No burden is so heavy than a burden shared. No goal is so difficult to achieve when you have many at your backs, cheering you on.

This is real people power. We ignore these sentiments at our peril.