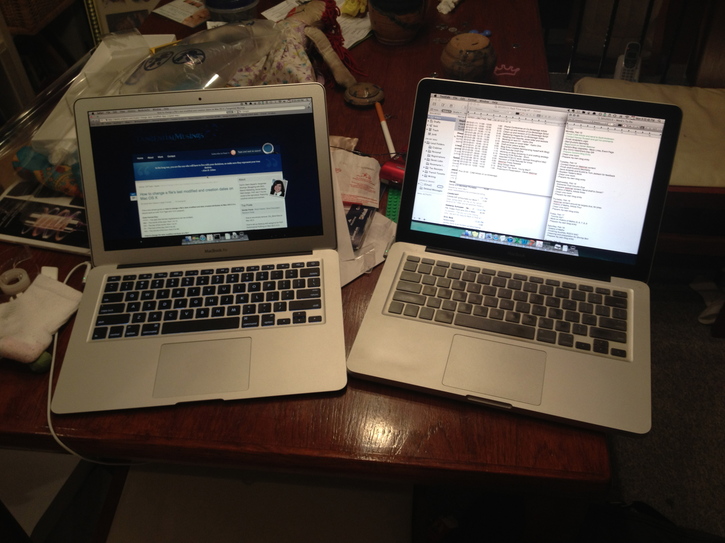 It’s amazing to believe that ten years have passed since I first started this blog. And perhaps it’s an appropriate coincidence that I celebrate this day with the arrival of a new computer. After some hemming and hawing, and finally some short, sharp encouragement by Erin to just jump in and get one, I have bought a reconditioned 13-inch current generation Macbook Air. This computer will become my own personal computer, whereas the venerable aluminum unibody Macbook will retire to being the family’s video computer, children’s homework computer, static desktop computer.

This is the second Macbook Air that this family has owned. If you’l remember, after our old computers were stolen three years ago, we bought the unibody Macbook and a reconditioned Air to replace them. Unfortunately, the Air fell out of favour with us, being a first generation model and somewhat underpowered for Erin’s needs (it still used a mechanical hard drive, if you could believe). However, since the Air’s upgrade this past July, I’ve been salivating over the models whenever I visited my local Apple store. And trying out this new Air in earnest, I can say that I’m happy with this purchase. The Air is substantially faster than the unibody Macbook (even with its 8 Gb of RAM and SSD drive), and it has a finer resolution display. It is also noticeably lighter, while maintaining the tactile features of the Macbook that I like (I may be an oddity, but I do love the chicklet keyboard). This computer will definitely serve me well on the road.

Best yet: the battery definitely lasts longer than my old Macbook. It seems to run cooler too.

So, ten years on a single blog. That sounds like quite an accomplishment, though less so now than if the blogosphere were as fashionable place as it was even five years ago. I’ve spoken about this before (indeed, you’ll probably find the posts where I talked about it in the “on this day” section of the page, just below), but the fad that was blogging has faded somewhat since the heady days of the early part of this millennium. I suspect that few new blogs are being set up, and most people are gravitating towards Twitter and Facebook in order to maintain their contact with the social media world.

There’s still Boing Boing. There’s still the Huffington Post. And many of us who started blogging a few years ago are still hacking away at it. But these people found their audience years ago. They’ve built that community that was key to a successful blog and, God bless ‘em, that community has stayed with them.

And, I suspect, these individuals continue to derive enjoyment in the day-to-day activity of blogging. Once you get started writing a daily journal or a writer’s notebook, or a diary, it’s hard to stop, because it becomes an important outlet of your creativity. It’s as important as exercising, and the key to successful exercise is dedication. In that respect, I think that regular bloggers are healthy writers. They’ve shown to everybody — and, most importantly, themselves — that they have the discipline to just keep on writing. Twitter is too easy, and Facebook is too disorganized. Call me a curmudgeon, but blogging is the place for me.

It’s amazing looking back on the ten years this blog has existed and consider how much my life has changed. I’m now a father of two, a published author, and someone who is finally making a living on his writing. And at the same time, I’m grateful for the things that haven’t changed. I’m still married to a beautiful and talented woman, who has also lived her dream. We are writers, and I think we’re going to continue to be writers for the foreseeable future.

Earlier this month, I gave myself a goal of writing a post a day for the month of February, and I’m almost halfway towards meeting that goal. Already, I’ve amassed more posts this month than I’ve written for any month since the last election. And I feel good. A year ago, I was starting to wonder about whether there was any point in continuing with this blog and, at this point, I think there is. I am busy, and there’s still no news I can give people on the fiction writing front, but blogging satisfies me. And maybe, just maybe, we’ll end up celebrating this blog’s twentieth anniversary, ten years from now.