Valentine's Day at the Bow Residence 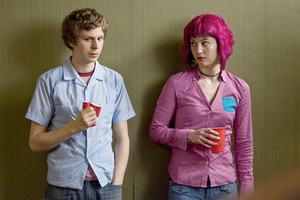 …was celebrated mostly by our daughters. Yesterday, I helped Vivian cook up some cupcakes to take to school and, of course, Nora had to be included in that activity. It was generally successful, and Vivian’s cupcakes seemed to have gone down well with her fellow classmates at school. Unfortunately, Nora’s preschool, which wasn’t hosting such a party, couldn’t give out her cupcakes to her fellow students, but I’m told that the teachers enjoyed them afterward and were very thankful to Nora.

For Erin and I, our gifts to each other are far less fluffy and hearts. For Valentine’s Day, Erin gave me permission to buy that Macbook Air I’d been salivating over for months. For her, I ended up inadvertently buying a pound of $100-per-pound coffee at a local roastery. There’s more to that story, and I’ll be writing it up for this week’s column of The Kitchener Post, so stay tuned.

Things have been rather disrupted this week, since I’ve hit a bit of a crunch time at work and, last Sunday, Erin lost her footing while carrying a basket of laundry down the basement steps and careened directly into the railing, giving her side a nasty smack. So nasty, it hurt to breathe. So, she went to see our family doctor who, after some very scientific poking, announced that Erin either had a bruised rib, or a cracked rib.

“What’s the treatment for a cracked rib?” Erin asked.

“Rest up, and take lots and lots of painkillers,” said our doctor (wrapping a cracked rib isn’t possible, since the rib’s got to move, or else you don’t breathe).

“How can you tell if you have a cracked rib?” Erin asked.

“You get a chest x-ray, and even then, it’s not likely to be conclusive, since cracked bones don’t always show up on the x-ray.”

“What’s the treatment for a bruised rib?” Erin asked.

“Rest up and take lots and lots of painkillers.”

As you can well imagine, Erin decided to save herself the chest x-ray and assume that she cracked a rib. She’s still mobile, though she probably should have rested more today than she did. The kids, unfortunately, are a bit distressed that their mother is moving slower, and can’t give them the piggyback rides they’re used to. Vivian, however, has stepped up to help with taking care of mom.

As for my own work, I’ve suddenly found myself with multiple projects on my plate this week, but I’m working through them. I put everything on a to-do list at the beginning of the week, and it looked daunting, but I’m feeling better now that some of the stuff has been crossed off. It has been a challenge keeping this post-a-day pace on the blog, but I think it’s helping. The additional task has helped put my remaining time at an even greater premium, and that’s even less incentive to waste it with web surfing. I don’t know if I’d recommend this as a permanent solution, though.

I’ve not been able to work on my fiction projects for a while, and that’s frustrating. But I am hopeful that I’ll have time in the coming weeks, and some news to report on the fiction front. I can’t promise anything, but I would like to ask that you all keep your fingers crossed for me.

And on that cryptic note, I’ll bid you all good night.