My, Grandpa! What Big Patties You Have! 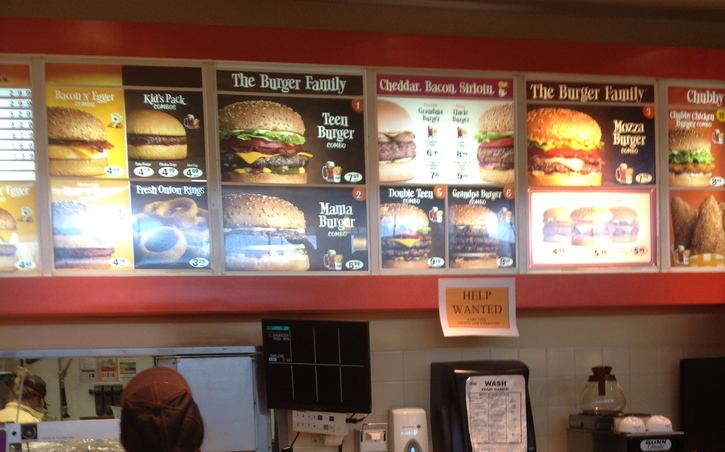 Visiting Conestoga Mall earlier this week, I stopped by the food court and happened to spot the A&W menu. Now I’ve eaten at this franchise chain before, and appreciate their burgers, but something struck me about their menu. You notice how they follow a family motif? There’s a teen burger, a momma burger, a papa burger, and so on. And I suppose, since A&ampW and everybody else in the world is aware of the Goldilocks story, that the momma, the papa and the baby burgers would be different (if somewhat sexist in its assumptions) sizes. Still with me, right? Still with A&W?

But have a look at the grandpa burger, which is at the middle bottom of the picture, just above the ‘help wanted’ sign.

I guess it follows the Goldilocks logic, but does it follow the health logic? I mean, consider: you’re the baby in the family, so you get the baby burger. It’s a small burger. Your a teen, and a growing kid, so you get the teen burger, and it’s a larger burger. If you’re in the middle of a growth spurt, I guess you could feast on a double teen. Mommas and papas? Well, they’re adults, so they should get adult portions, surely? Makes sense.

And grandpa? Well, clearly, grandpa is getting on in years, so the time has come to kill grandpa by stuffing him full of three patties of artery-hardening, beefy goodness, not to mention the condiments, fries, soda and whathaveyou. It’s a win-win situation where the kids get the inheritance, and grandpa, maybe, dies happy.

I can’t help but notice that A&W doesn’t advertise a grandma burger. Something tells me we know now who killed grandpa.

I’m in Toronto and three auspicious events took place around me. I was able to attend two of them.

First of all, congratulations to Thomas Mulcair on winning the leadership of the New Democratic Party and becoming the Leader of the Official Opposition. It should make the next few years in parliament interesting indeed. He’s not everybody’s first choice, but he’s worked hard to get where he is today, and that’s an asset. Moe than that, the NDP have always been a team effort, so Mulcair’s success and failure depends on the strength of his bench, and Mulcair’s willingness to work with them. Best of luck to the NDP in striking a good balance here. I wish them well because, Canada needs that strength in the opposition benches, now more than ever. Time to hold Harper’s feet to the fire.

But I wasn’t at the convention. Didn’t want to go. And it certainly stretched a ways — thanks possibly to a DDoS attack on its servers which drew out the voting process (bastards, whoever did it). There were some political bloggers I would have loved to have meet up with outside the convention, but they had their hands full inside.

Instead, I headed up to Bakka-Phoenix books to attend the launch of Graeme Burk and Robert Smith’s hefty book, Who is the Doctor, a complete review, reference guide and trivia tome on the Doctor Who revival. Doctor Who fans will love this irreverent but friendly take on the new series, and it was very gratifying to see over 70 people turn out to wish Graeme and Robert well. It was good meeting with some old faces I hadn’t seen in a while.

And speaking of old faces, the highlight of the day was a surprise 40th birthday party organized for my friend Dusko Ivkovic (whom I’ve known since kindergarten, so of course there was no way I was missing this). Thanks to the dedicated organization of his fiancée Silvia, we got him good. He wasn’t expecting a thing and the look on his face when we shouted ‘surprise!’ was well worth it. I also met some faces that I hadn’t seen in years, and I’m reminded that my own fortieth birthday is imminent. Where does the time go?

So, congratulations all round. Today was a happy day.