The Man I Was II 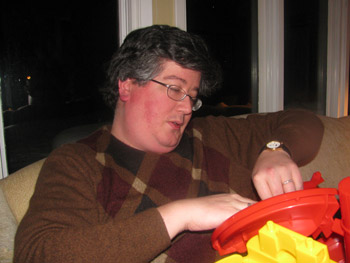 Ten years ago today, I turned thirty. That was a landmark event, though not as landmark as today, which you’ll figure out why if you do the math.

The past decade of my life has been different from any other, because it’s been the only decade of my life that I’ve diligently logged through this online journal. Events that I would have forgotten are logged for posterity. Just trawling through the archives is an exercise in nostalgia, remembering trips, events, even television shows.

And it’s interesting to see how I’ve changed and grown these past ten years. That’s to be expected, I guess, given the life-changing things that have happened to me and to my loved ones. But I’ve also changed in smaller ways that are harder to chart, but only really come clear when one looks back at his writing from ten years ago.

Take this blog entry from April 30, 2002. What am I talking about there? Where I’d put subways if I had all the money in the world? Whatever happened to that man? Well, I’ll tell you: in 2002, I was looking forward to the opening of the Sheppard subway, and anticipating that once the line opened, more funding would come out of… somewhere, and we could finish the thing, and start building the downtown relief subway. Ten years later, where do we stand?

Not only have we wasted ten years looking for funding that simply did not exist, this has been the state of public transit since the last major pre-Sheppard extension of the subway network opened, in 1985. The year that I was thirteen was the year that Metropolitan Toronto agreed on the construction of the Network 2011 subway expansion proposal, which — read the name — was supposed to have been finished a year ago (although, by 1985, the schedule had slipped, and the transformation of the Eglinton West busway into a full-fledged subway was to open in 2014 instead). I was thirteen then. I’m forty now. How much longer am I to wait if we pursue unlimited subway development with limited transit funding? It’s been twenty-seven years of near futility. What’s the definition of insanity again?

Well, that wasn’t the only thing that was going on. In April 2002, I was taking my first steps out of Doctor Who fan fiction on a path that was giving me confidence to create my own fictional universes and write material that was publishable outside of fan-fiction and tv-tie-in circles. There are some pre-blog things that I’ve done and forgotten. One of those things that are still out there is my early attempts at Harry Potter fan fiction. This is both a blessing and a curse, I expect. Looking back ten years, it’s encouraging to see how far I’ve come, but looking back ten years at some of my material and all I can say is… yeesh (and even this is miles better from my earliest effort at fan fiction, begun when I was thirteen, and still in bloody print!)! But what was that about a journey of a thousand miles beginning with a single step?

At the time, of course, I was also working on the Trenchcoat Farewell Project, and as the title implies, I was saying good-bye to an important phase in my life when I immersed myself in the hobby of fan fiction and, I think, became a much better writer as a result. And, of course, it’s through fan fiction that I met some of the most important people in my life, not least of whom is Erin, my wife.

Ten years ago, Erin was also taking big steps forward into becoming a writer. We were a long way from Plain Kate, but we were both well ahead in that we knew what we wanted at the time. We’ve spent the better part of the intervening ten years trying to get it and I think, by and large, we’ve succeeded. We are a married couple who is making a decent living through our writing. I am constantly amazed at what we’ve achieved, and I’m grateful that the fates have aligned to allow this to happen.

Other Interesting Links from the Period