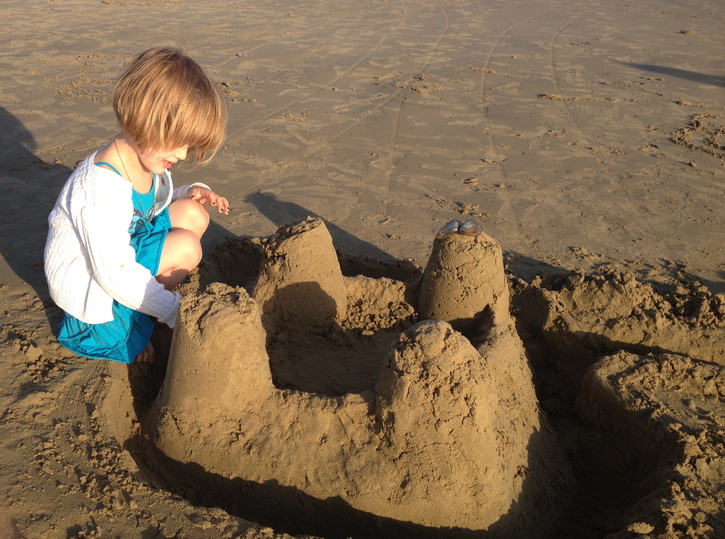 So, I’ve had the privilege of building sandcastles on both the Atlantic and Pacific coasts. The Pacific one was done with the help of Vivian and Nora, so I personally have to count that one as my favourite.

We’ve had a very full week. I’m writing this now in Des Moines where Grandma Rosemarie and Grandpa Michael are giving us a brief but welcome respite from all the travelling. A week ago Friday, as you know, we flew to Fresno to visit Grandpa Wendell and Grandma Judy. The day after that, we visited General Grant and other grand sequoias.

After a baseball game on Monday, on Tuesday we left the kids with their grandparents and boarded Amtrak for a jaunt to San Francisco. It’s a great city and we couldn’t miss it. Erin also had a number of writing friends that she’d known online for almost a decade but hadn’t met face to face. The trip to San Francisco made this meeting possible.

Me? I toured the city’s public transit network, of course. Erin and I rode the BART subway from the Amtrak station at Richmond to downtown San Francisco and, after lunch, I was on my own to try out the Market Street streetcar line, the cablecars and the Muni.

San Francisco’s legacy streetcar line on Market Street is quite a rolling museum. An actual streetcar line that was replaced by an LRT subway underneath, for some reason people weren’t able to let the streetcars go away. Operating historic cars along its route, the line quickly attracted so many passengers, frequencies increased. Riding the F line, as it’s called, is almost no different than riding the King streetcar. There’s often a streetcar in sight when you get to a stop (which is on a traffic island in the middle of the street), and the cars operate in mixed traffic on Market (and in private right-of-way along the Embarcadero). The fare is a plain MUNI fare, with transfers available to connecting services. And with PCCs offering the mainstay of service, it certainly reminded me a lot of my own childhood rides on the TTC.

For a more modern experience, you go underground, where more CLRV-like LRT cars operate through a tunnel before emerging on the surface to travel to points in the south and west end of San Francisco. If you want to see what’s possible once the under-construction Eglinton Crosstown LRT, with its combination of underground and surface operation, you need only check out the T-line, which does exactly the same.

I was a little disappointed with San Francisco’s cable cars, however. I tried boarding the Powell-line cars at Market Street, and discovered that the line-up for it was at least a hundred people deep. MUNI or whoever operates the cars didn’t seem interested in upping the frequency of service to meet the demand, and rather than wait an hour or more, I reboarded the Market Street streetcar and headed to Fisherman’s Wharf. After a good lunch of fish and chips, I tried accessing the cable car from the other end of the line. No go. If anything the lines were even longer and the service just as slow.

This ate up a lot of my time and I was disappointed, as there was more of the system I wanted to see, and no time to see it. However, I did manage to get the cable car experience at the entrance to BART’s Embarcadero station. There, the California Street cable car was operating, and there were no line-ups. Service was pretty slow, though, and I waited about ten minutes before a cable car finally pulled up. Still, I rode the line to the end and that was pretty thrilling. You can see why they installed cable cars on San Francisco. Those hills are intense.

Just as fun was taking the ferry with Erin to attend an evening party with friends at a tugboat that had been converted to a floating house in Sausalito. We ended up staying overnight. I’d never slept below the waterline before, but it was surprisingly comfortable.

We caught Amtrak’s Coast Starlight from Richmond in the morning to meet up with the kids and grandparents at San Luis Obispo, so we really experienced some of the extremes in California. The temperatures on the trip went from the teens to around forty degrees celsius and then back to the teens as we hit the waves at Pismo Beach. We ended up getting thoroughly sunburned, but it was worth it.

Vancouver is a fantastic city, and Third Beach in Stanley Park is a must see, but there is a difference in standing on a beach in California, looking west, and knowing that the next piece of land you’ll encounter due west is the island of Japan. The experience makes you feel small and, strangely enough, somewhat grounded.

You can see more photographs of our Pacific coast experience here, and our San Francisco treat here. 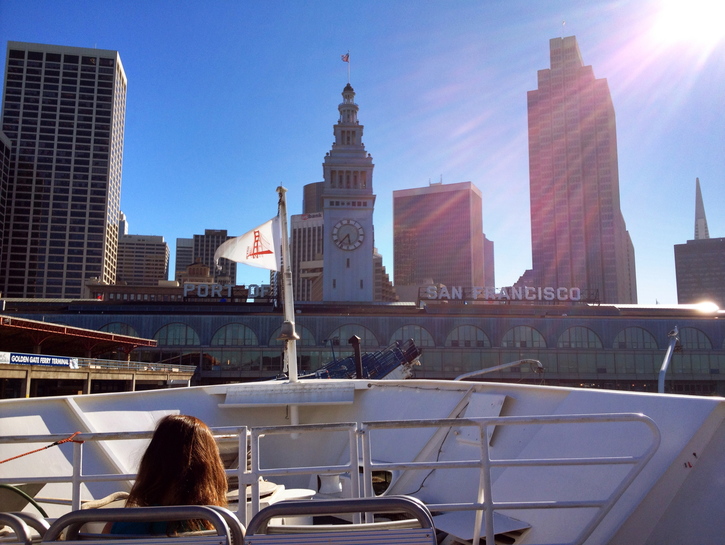 P.S. One complaint I had about San Francisco is the extreme shortage of lockers. I know that 9/11 changed everything, but it’s still annoying. We had an overnight suitcase with us because, well, we intended to stay overnight, but I certainly wasn’t looking forward to dragging this thing all over the city’s transit system. Lockers weren’t in sight; the security office at the Ferry Building refused to consider checking it, the hotels would check backs “for our guests only” (to be fair, we only picked the nearest one to try, and it happened to be the snootiest, a Hyatt), and the store clerks had no idea where else we could look.

I’d like to thank the Book Passage store in the Ferry Terminal who accepted the suitcase for a good four hours duration while I went galavanting across the city. In return, I bought a very good book from their store. I would have bought the book anyway (it’s about a community of houses that was built using old streetcar and cable car bodies), but the service of holding my overnight bag was a nice bonus.