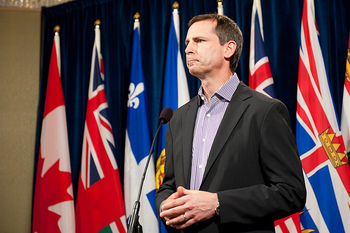 Image courtesy BC Gov Photos, used in accordance with their Creative Commons license.

So, by resigning, Ontario premier Dalton McGuinty becomes the first major political figure that this blog has charted from start to finish (Stephen Harper isn’t finished, yet, and Stephane Dion and Michael Ignatieff were not major political figures). McGuinty resigned today, leaving Ontario with a very interesting political situation in Queen’s Park. The legislature is prorogued until such time as the Liberals choose a successor. We are currently governed by premier fiat and bureaucracy.

I’ve been critical of McGuinty from the beginning, but I think in general he tried to do the right thing. He did restore some funding to public transit, and has gotten started on needed rapid transit projects. His record on education is mostly good, in my opinion. He spent where he needed to spend, and gave us all day kindergarten. Full disclosure, my kids have both taken advantage of full day kindergarten, so take my words here with a grain of salt, but I have seen the benefit this investment provides. And I supported and still support his move to harmonize the PST with the federal GST.

He was a better premier than Mike Harris, in my opinion, but that’s not a high bar. And especially in his later years, McGuinty made some decisions, if not outright mistakes, which have tarnished his legacy. His once bold public transit initiatives have been made timid and are now under threat. He allowed ORNGE to become a scandal. And he forced rural residents to swallow unpopular wind farms while backing out on two expensive powerplants just to save a few urban seats. Then there’s the sale of Ontario Northland. For those and other slights, northerners will never forgive him.

But he did try to do the right thing, and I’ll respect him for that. He has the love of his wife and children, and he is to be commended for that. His resignation was abrupt, yes, but he was probably expecting to retire under a majority government. There was simply no graceful way to exit under his current situation, and maybe he felt that ripping off the bandaid was the best approach. I can understand that.

His decision to prorogue Queen’s Park is not cool, however. Yes, he is perhaps the first political leader of a minority parliament since 1967 to leave while in office, and yes I wouldn’t trust Tim Hudak as far as I could throw him to try and bring the Liberals down in this leaderless state, but did Pearson prorogue parliament for the leadership campaign that gave us Trudeau? Is it sensible, wise or at all democratic to shut the lights on the provincial legislature for an indeterminate amount of time so that a few hundred or so partisans can choose the next premier of Ontario? And how much will this cost us? A number of pieces of legislation that McGuinty himself deemed to be important have now been killed, including the wage freeze legislation that may have cost the Liberals their chance at winning the Kitchener-Waterloo by-election. Are these pieces of legislation to be reintroduced when Queen’s Park resumes?

We live in interesting times. I see no obvious successor to McGuinty in the list of leadership hopefuls the media has supplied, and Tim Hudak has shown little ability to speak to urban voters with his joke of a white paper on congestion in the GTA. The next election, which could come as early as next spring, promises to be a race of two nobodies, and Andrea Horvath. I wonder if it will be a three-way tie?

That may not be the legacy that McGuinty wanted to leave Ontario, but at least he has one. And I do expect and hope that he will breathe a little easier tomorrow, to find himself in the company of his friends and family, and with this province no longer his problem.