We'll See How Brave You Are...
The Night Girl Starts Over 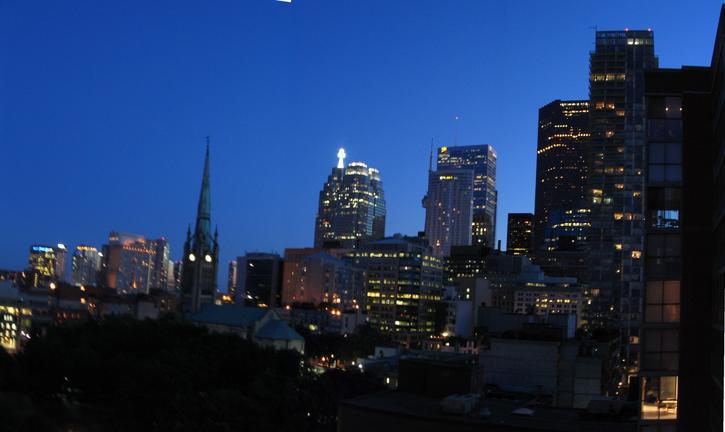 The photo above is entitled Holiday Inn Express View 10th Floor and is by pvr5100. It is used in accordance with his Creative Commons license.

Yesterday, I finished and submitted a manuscript for another non-fiction book for school kids. Assuming all goes well with the edits, this will make my tenth non-fiction book that I've completed and submitted for publication since August. As I may have mentioned before, these work-for-hire projects can be a little fraught with their deadlines, and things got a little bit hairy back in October when multiple books were due by the end of the month. Truth is, however, I enjoy these projects, even though they pass by so quickly, and I'm proud to have my name attached to these publications. As intense as these sessions can be, I am still doing the job I want to be doing, and I count myself very fortunate indeed.

In other news, my fiction focus may be going back to The Night Girl. I've talked a lot about this unpublished novel of mine, which is now almost ten years in the making. I'm still proud of it, and I'm fiercely proud of its main protagonist, Perpetua, but something just wasn't right about it. I thought I had a failure on my hands, and then I thought, while it might not be to a publisher's taste, perhaps self-publishing was an option.

But my new agent told me to hold up. Wait for a bit while we get Icarus Down on submission and then she'd have a look at it and see what she could do. Emily interned in the editorial offices of a number of publishing houses before becoming an agent, and her experience there shows. She helped me rework the plot of Icarus Down to make things flow better, and she read over The Night Girl with a similar eye. A week ago, I heard back from her. She loves it! She loves Perpetua, she loves the story... but, yeah, something doesn't quite click. But, here's the thing: if we can make it click, then it might be publishable.

Emily has already motivated me into making some big changes to Icarus Down, taking out some elements that I personally loved but which were harming the story as a whole. In the business this is called "killing darlings". But The Night Girl needs something more. I want to see this book in print as much as I want to see Icarus Down in print. I've been motivated already to make changes to both books. Now, with Emily's encouragement, I think I'm going to take a big leap.

Authors do this all the time. When Erin submitted the first draft of Sorrow's Knot to her editor, he had a similar reaction. He loved the story, the world, the characters, but there were elements that just didn't work. And Erin, in addressing these elements, basically set the old manuscript aside and started writing from scratch. In her words, she kept on pushing and looking for the revisions to come together to mesh with the parts of the story she felt worked and could be reused. Those connections never materialized. So, when Erin submitted her second draft of Sorrow's Knot, she had a story which had most (but not all) of the same characters, the same world... but a completely different structure and resolution. Almost a completely different story, in fact, but one which Erin admits is better than the first draft she submitted. If all goes well, Sorrow's Knot should be on bookshelves late this fall. My friend J.M. Frey tossed a beloved manuscript out the window due to an irreconcilable flaw, but then she recently told me that she found a way to reconcile it. She just had to give the main character a completely different backstory.

I have spent the past ten years writing and then tinkering with The Night Girl. The time may have come for me to set the manuscript aside. Perpetua is alive in my head. So is Fergus. So is Earthenhouse. So is the world they live in. Now, I need to go in and write their story a second time, starting from a different opening. I need to explore the world anew to see if there is a story that I've missed.

By leaving the manuscript behind, I feel that I am casting myself out over the abyss without a safety net to catch me. I have written six novels in my career. I've never rewritten one.

So, wish me luck. You may be getting snippets of Perpetua again in the coming weeks and months, as I re-explore her world and her story.

Part of leaving the old manuscript behind may involve finding a new soundtrack to write by. As I've mentioned before, a number of my novels pair up with a selection of songs that become those novels' soundtrack albums. The Night Girl has one, and I suspect that listening to it again may lead me to write the same story over again, problems and all. Erin suggests a selection of songs with a darker edge.

A place to start may be Tori Amos' latest album, Gold Dust. Released just two months ago, Tori's thirteenth solo album and one timed to the 20th anniversary of the release of her first could be summed up as, "Holy cow! Somebody gave Tori an orchestra!" Gold Dust placed in both the regular and "classical album" charts because she employed a full orchestra to help deliver an orchestral take on several of her classic songs. But having listened to the album, I must say that I'm impressed. Tori's music had an orchestral quality to begin with, and some of these songs come out better than their original takes.

One song that I think I'm definitely adding to the new Night Girl soundtrack is Amos' Yes, Anastasia, which in its Gold Dust arrangement is much better than her original take in Under the Pink. The shorter running length combines with the orchestral backing to pack a lot of punch. It's worth buying from iTunes, but here's a video of the song being performed live in Rotterdam as a sample.