Hulk vs. She Hulk 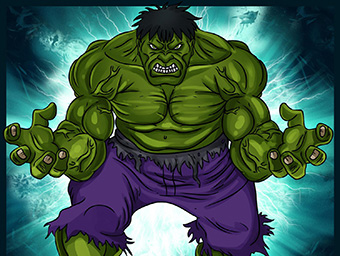 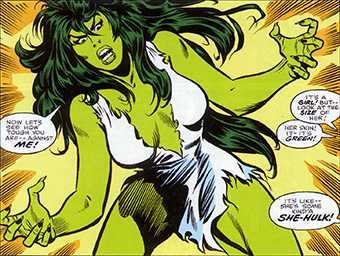 I grinned and made a note to get some milk before tomorrow.

But Erin continued the riff. "Yes. I get big and green and smash things like the Hulk. Only, a female version of the Hulk."

Erin blinked at me. "There's a character called She Hulk?"

She stared at me incredulously. "Did they make her so that she and the Incredible Hulk could breed?"

"No, I think she's Bruce Banner's cousin or something," I replied. "They shop at the same tailor, anyway. When she gets big and green, everything rips, but nothing important falls off."

Erin rolls her eyes. "I can tell that bothers you."

"Well, no," I replied. "It's a problem with the Hulk, too. I mean, he gets big and green, and everything, his shirt, the lower legs of his pants, all rip. But his waist and crotch -- the tightest parts of the pants around -- never go 'ping!'."

"Well, maybe that's the reason why the Hulk always is so angry," said Erin. "Because when he's green, he's got a constant wedgie."

I thought about this. "You mean to say that if somebody were to say, 'Here, Mr. Banner, slip into these sweat pants' and then slaps him upside the head, he'll go, 'HULK--? Hulk go watch tv."