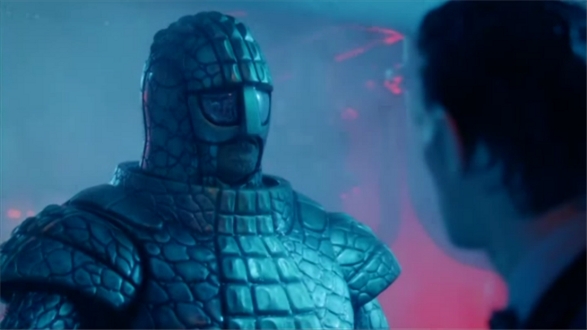 It’s been quite a week. At home and abroad, things were happening that made the idea of writing up a review of the latest episode of the Doctor Who revival somewhat frivolous. But maybe at the end of the week, we need some frivolity.

The latest episode of the Doctor Who revival is entitled Cold War. It was written by Mark Gatiss and directed by Douglas Mackinnon. I think by now it won’t be spoiling things too much when I say that it features the Ice Warriors for the first time since 1974.

I’ve had my issues with Mark Gatiss’s stories before. In Night Terrors, I feel that his story failed to live up to its promise. I think the same could be said for Victory of the Daleks. With Victory, however, Mark did deliver a fun, action oriented script that Erin and I cheered, in spite of the silliness of some of the premise. Somebody also pointed out that Victory of the Daleks might also have functioned better as a two parter. The mystery of the Daleks’ plan is never really given space to grow and bloom, and the standoff at the end could have felt less rushed. The longer running times may be why Gatiss’ Sherlock episodes are so much stronger.

But such are the constraints of the television medium: 42 minutes is what Mark Gatiss had to work with, and given that, he performed admirably with Victory of the Daleks. And I think the assessment holds true with Cold War. Can you do Das Boot with aliens in 42 minutes? Gatiss gives it a good try and generally succeeds. But I can’t help but feel that a deeper, more atmospheric story could have been produced if Gatiss had been given a broader canvas to work with.

A full, spoilery review follows after the break.

It’s 1983. NATO and the Warsaw Pact are deep in the Cold War. At the North Pole, we join the crew of a Russian submarine conducting a nuclear launch drill. The atmosphere is charged, as you would expect. There is tension between the stalwart Captain Zhukov (played with Connery-esque flair by Liam Cunningham), the Soviet political officer Lieutenant Stepashin (played with true-believer resolve by Tobias Menzies). They’re joined by a civilian, Professor Grisenko (who is played by David Warner — a noteworthy actor who, incidentally, campaigned to be the eighth Doctor back in the late 1980s, and played an alternate version of the Doctor in Unbound, one of the Big Finish audio plays).

Professor Grisenko is there because, as well as rattling sabres at NATO and daring them to take a swing, the submarine is exploring the Arctic Ocean for oil, drilling up samples and taking them aboard. Grisenko has found a particularly interesting sample in the ice that he coyly says “could be a mammoth”. Of course, it isn’t. And cue an overeager lower shipman lab assistant with a blow-torch, curious as to what the big block of ice really holds, and you have a very angry Martian waking up and bursting from the ice for the pre-title-sequence cliffhanger.

The Doctor and Clara arrive in the midst of mayhem. It’s not 100% clear, but it appears the Ice Warrior has been wreaking havoc. The submarine is on a collision course with the ocean floor, there’s water spewing everywhere and lots of shouting. Worse, before the Doctor can do anything, the TARDIS mysteriously disappears, leaving him and Clara stranded. The crew of the submarine are in no mood for small talk, so the Doctor has to talk really fast in order to convince Captain Zhukov to manoeuvre the submarine into a soft landing (by the edge of a sea chasm, a fact that will come up later). Now that the crew have time to breathe, the Doctor and Clara are forced to come up with explanations. To the Doctor’s credit, he knows the psychic paper won’t help him here.

It isn’t long before the Ice Warrior appears, and as the Doctor says, it doesn’t rain but it pours. The Martian announces himself to be Grand Marshall Skaldak — a name that the Doctor recognizes. The Doctor begins to realize the danger they’re in: One of the most famous Ice Warrior — one that is a true believer in the Martian code of war — has woken from 5,000 years of sleep. He feels he is alone in the universe. He is furious at the injustice of it all, and feels he has nothing to lose. And he has at hand a nuclear submarine in the midst of the Cold War.

If I had to describe Cold War in one word, that word would be “solid”. This is a solid episode. The action scenes are action, the actors all do a fine job, and Gatiss treats the Ice Warriors with respect, and takes them into areas that haven’t been explored before. The decision to show what an Ice Warrior looks like without its armour is the episode’s most brilliant stroke. Gatiss makes the Ice Warriors mysterious, fast and downright scary in a way the Cybermen are not. There are nice nods to the little green men of The X-Files. But the best thing that Gatiss does is make Skaldak into a real character, with a backstory and a motivation. He believably bonds with Clara, and holds his own in an argument with the Doctor.

But while Cold War is solid, it is not a standout. The characterization of Grand Marshall Skaldak aside, the crew of the submarine are written in bold strokes which the actors generally fill out. And in spite of the spewing water and the tight corridors, I didn’t get much of the sense of claustrophobia that I’d expect from such submarine movies as Das Boot or The Hunt for Red October.

Part of the problem may be the constraints of the episode’s running length. Claustrophobia is built, not imposed. The actors all do a fine job fleshing out the material that Gatiss gives them, but only a few of the ideas this episode puts forward is really explored. What about the tension between Captain Zhukov and the sub’s political officer, for instance? What about the political officer’s attempt to talk Skaldak into some kind of alliance? What does Clara’s singing have to do with the resolution?

The Doctor gets a lot to do in this episode, but he doesn’t get much done. He yells a lot at Skaldak, threatens to blow up the ship, but has the resolution taken away from him before things really get a chance to stick. Likewise, the fact that the submarine is teetering at the edge of the abyss provides the obvious opportunity for a climax, but it doesn’t really get used. The tension does not have a chance to build up. Things are resolved before we have a chance to sweat over them.

A 90-minute Cold War could have given us more, but it is important to remember that all of this stuff is there in the episode. It’s just a little rushed. We get some nice bonding between Clara and Professor Grisenko, for instance, as he begs to tell her about the future of Western rock and roll. Skaldak gets some good character development, and the depth of the Ice Warrior persona is honoured. So I can appreciate how well the episode holds together, and how much Gatiss wanted to get done. It makes for a good episode, but one that leaves me wanting more.

As good as the acting generally is, there are a couple of parts that really stand out. The way Matt Smith just pauses and stares as he registers Grand Marshall Skaldak’s name is a great moment that shows the audience just how dangerous the situation really is. We realize, with growing dread, that the Doctor knows the Ice Warrior by reputation, and that’s not good. Not good at all.

But the highlight for me was Jenna-Louise Coulman’s acting as Clara has a delayed reaction to seeing the seamen’s clinically dismembered bodies. It’s a complicated reaction, but one the audience instantly understands. Clara is holding it all together, but on the inside, she is realizing just how real the dangers have become, and how much she really wants to scream.

I forget: has Clara screamed yet on this show? That’s quite an accomplishment. And the tension inherent in wanting to scream, but forcing oneself not to, is more dramatically interesting, I think.

I would like to thank Mark Gatiss for convincing a reluctant Steven Moffat to bring the Ice Warriors back. According to interviews, Gatiss pitched the idea to Moffat during a phone call when the two of them should really have been talking about the next episodes of Sherlock. Gatiss’ instinct is sound, and he has done a good job exploring what makes the Ice Warriors special. They are not just Cybermen in Martian clothing.

And dare I hope that, by bringing the Martians back, Gatiss and Moffat may have more episodes featuring them, under wraps? They look darn cool, and much could be done with them. But I guess we’ll just have to wait and see.