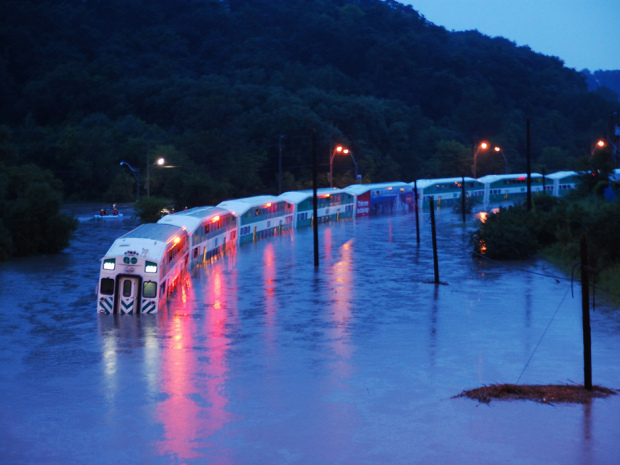 The image above is by Winston Neutel and is courtesy the Canadian Press and the National Post.

Today, my home town received the most rain within a twenty-four hour period that it has ever seen in its history. This rain eclipsed even the records previously set by Hurricane Hazel back in October 1954.

I’m way too young to have experienced Hurricane Hazel, but it’s very much a part of the popular consciousness of being a Torontonian — especially one who studied to be an urban planner. Hurricane Hazel reshaped the city. Bridges were washed out, and homes were lost. The disaster, which killed 88 people in the city, forced the creation of the Toronto Regional Conservation Authority that decided (and enforced) the idea that it’s not a good idea to build houses on flood plains.

My father remembers Hurricane Hazel. He remembers it raining so hard, he decided to put on swim trunks, get a bar of soap, and walk out to the back yard to get a shower. As his home had hard water at the time, the pure rainstorm water allowed him to get a good lather. Other Torontonians remembered struggling home in the rain, and then their shock at seeing what so much water had done so quickly.

Today, as much rain or more hit Toronto during the latter half of the afternoon rush hour, knocking out power, most of the Toronto subway, most of Toronto’s highways, many underpasses, and even GO Train service. One train, bound for Richmond Hill (and pictured above) ran into severe flooding near the Don River and was left stranded. Passengers had to wait for hours for rescue, which finally came by boat. The commute home was horrendous to say the least, and in some cases quite scary.

However, while manning Transit Toronto’s Twitter feed, and helping any way I could by RT’ing news and service announcements, I couldn’t help but be impressed by the spirit shown by Torontonians as they coped. The news of the rescue of the stranded GO Train passengers in particular is remarkable for how stoic the passengers remained, even as the floors of the coaches were flooded, and people had to wait hours cooped up in their seats before help could arrive. That’s a testament to the city.

It’s also remarkable that, thus far, we have no reports of casualties or serious injuries (though I expect the damage will still be extensive). And for that, we might just have to thank Hurricane Hazel itself. Even as the Humber and the Don flooded, no bridges washed out, and no homes were washed away, all because we were sensible enough to learn from our mistakes and not build houses where the water would go during a 100-year storm.

Thus we were prepared when the second 100-year storm hit us… 59 years later.