The Beach at the End of the Line 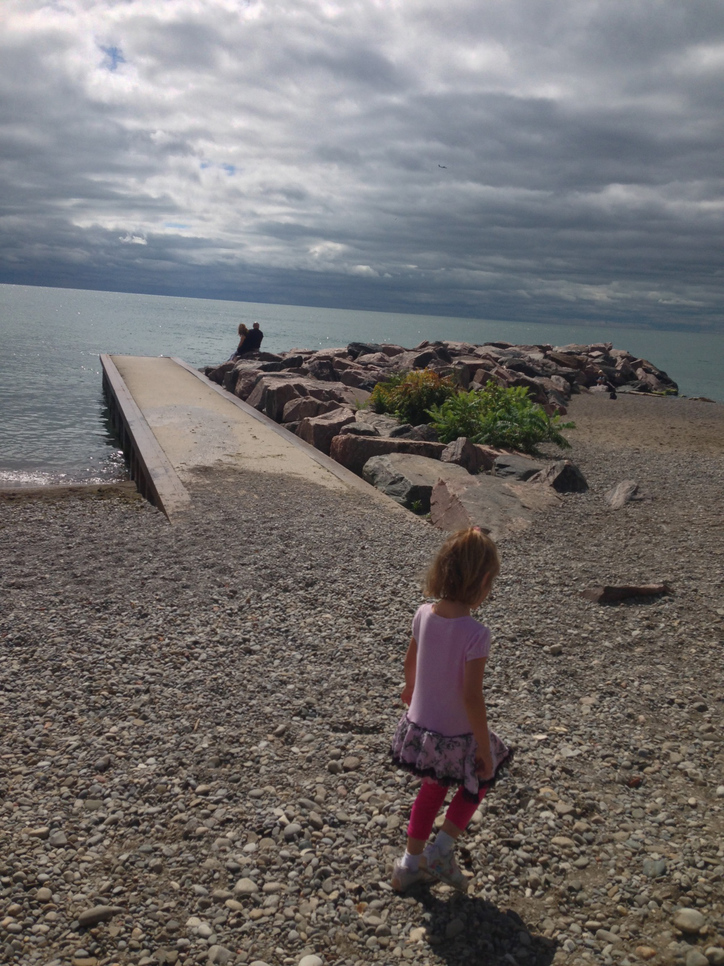 The title above is with apologies to Neil Gaiman.

The kids went back to school last week. Vivian went in on Tuesday, and Nora’s first day was Wednesday (she’s senior kindergarten, so they had a staggered stop to give all the junior kindergarten students time to get used to things). With Nora not in school on Tuesday, I arranged a Daddy-Daughter day. We went into Toronto and, for once, didn’t spend money visiting science centres, museums or the CN Tower. Instead, we repeated an earlier journey along the Queen Streetcar to the end of the line, where a beach awaited us just a five minute walk away.

This was a trip my mother took me when I was home from school. One reason for it was to satisfy my fascination with streetcars and where they went, but the beach at the end was no small part itself. That area of Toronto is known as “The Beach”, and has a lot of space for sand and water and is truly a gem, but the beach at the foot of Nursewood Boulevard south of Neville Park loop was particularly special because stones gathered there. And sea glass. We got a good collection to take home, and I learned how to skip rocks across the water (albeit, not very well).

The beach is still there. And while the clean-up of Lake Ontario has meant that there is no more sea glass to be found, there are still interesting shaped rocks and stones to skip. Nora seems to like it, and wants to be taken back again.

As expected, with the kids back in school, this has mean more time to available to write. And that’s what I’ve done. Just not on this blog. Here are some articles I’ve worked on these past two weeks:

This is in addition to continuing work with my real-estate broker client, and another column for The Kitchener Post (stay tuned).

I also watched Thor and Robert Downey Jr’s Sherlock Holmes on Netflix. The former was great fun, making me an even bigger fan of the Marvel Avengers movie series, while the latter was only watchable thanks to Downey Jr. and Rachel McAdams. The story managed to pull itself out of the muck at the end, but the whole thing was a confusing hodge-podge that, in my opinion, threatened to violate the rules of the world that Conan Doyle established and scrupulously maintained for Holmes.