No Surrender. No Retreat. 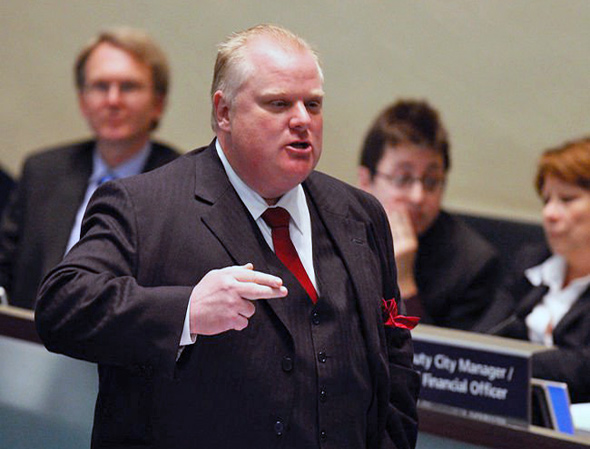 So, I think it’s fair to say that most of you reading this right now, even those of you who aren’t Canadians, know who Rob Ford is. If you didn’t know who he was two weeks ago, you’ve been given a lesson, through lead stories on the BBC and CNN, on Jon Stewart’s Daily Show, on Jay Leno’s Tonight Show, and on newspapers around the world. Rob Ford is the mayor of Toronto, my home town. And he’s been a bit of a bad boy.

Reactions to the recent revelations have been swift. Many of his defenders are either backing away or begging his brother to stage an intervention. Many of his opponents are getting giggly with Schadenfreude. Only his most ardent defenders remain and they either twist themselves into such knots trying to maintain Ford’s innocence that they put themselves into tinfoil hat territory, or they show a blasé disregard for the immorality of hanging out with criminals and lying about it, that they simply cannot be considered seriously when making judgements about people and politics anymore.

But let me turn for a moment to the Schadenfreude crowd, some of whom express disbelief with a wide swath of Torontonians for electing Rob Ford in the first place. “How could anyone have voted for that moron?” shouted one friend of mine from Ottawa. Well, let me answer that by asking him this question: what were Ottawa residents thinking when they elected Larry O’Brien?

Those of you who know me know that I’ve long been critical of Ford’s policies and his style of leadership. I knew, back in November 2010 when Ford was elected that Toronto was bound for a train wreck. But if you had told me that there would be a video, that the mayor would be caught in a lie about that video, that Toronto itself would be on the world stage as having one of the worst public relations disasters in history, I would have laughed in your face. I envisioned a train wreck. I did not envision a train wreck followed by a tornado followed by an earthquake followed by a 100 megaton nuclear explosion.

Mark Twain once said that history does not repeat itself, but it does rhyme. The train wreck in history that I was using to match Ford’s first (and, I expected, and still expect, his only) term in office was the election of Larry O’Brien as mayor of Ottawa in 2006. The election itself, the public perception of the mayoralty that preceded it, and the subsequent debacle in council did match up closely to what happened during Ford’s first two years in office in Toronto.

Consider: before Ottawa elected Larry O’Brien, Ottawa’s mayor was Bob Chiarelli. Chiarelli was a centrist mayor who had governed the Ottawa region since 1997. He brought in some sensible policies like their new LRT line, but he also wrestled with increased taxes. By 2006, he’d been at the top for nine years, and the public were getting a little tired of him. An ennui sets in around the eight-to-ten year mark in politics, and people get dissatisfied with how things are going at city hall (and, frankly, the politicians that are there are often getting a little complacent). 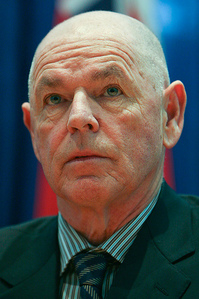 In 2006, Chiarelli ran up against a businessman named Larry O’Brien who campaigned as an anti-establishment, anti-LRT, anti-latte-sipping everyman who knew what Ottawa’s problems were, and was going to fix them from the top down. He was going to shake things up in city hall and damn any and all opposition. O’Brien beat Charelli handily, capturing 47.08% of the vote, and set off to change the culture at city hall.

In comparison, in 2010, Toronto had been governed by David Miller for seven years. Miller was a centre-left politician who had put forward a number of sensible policies and had turned Toronto’s fiscal position from one of alarming shortfalls to annual surpluses, but which also raised taxes. And while eight years hadn’t passed, the itch was setting in, largely due to a garbage strike that highlighted an uncomfortable relationship with the public sector unions. Miller did not run again in 2010 (even though polls suggested he could have won if he did), and so nobody stepped forward to defend his positions as the anti-Miller vote coalesced around Rob Ford, an anti-tax, anti-spending gadfly on council who promised that he was going to shake things up and damn any and all opposition. Ford beat his opponents handily, capturing 47.11% of the vote, and set off to change the culture at city hall.

In Ottawa, Larry O’Brien cancelled the city’s LRT project, and immediately ran into a lawsuit that could have cost the city hundreds of millions of dollars. He also ran into the uncomfortable truth that, while he was the mayor of Ottawa, he also had to work with fellow councillors at city hall, all of whom had been elected to office, and all of whom had their own popular mandates backing them. Things got fractious pretty quickly as O’Brien basically bulldozed and bullied any opposition he encountered until city councillors had enough and showed O’Brien that Canadian cities have a weak mayor system. If you fail to get council to support your initiatives, you have no power to implement your agenda.

In Toronto, Rob Ford cancelled the city’s LRT projects, and almost immediately ran into the fact that his subway plan was a lot more costly and served far fewer people. He also ran into the uncomfortable truth that, while he was the mayor of Toronto, he also had to work with fellow councillors at city hall, all of whom had been elected to office, and all of whom had their own popular mandates backing them. Things got fractious pretty quickly as Ford basically bulldozed and bullied any opposition he encountered. Even though he had the benefit of increased powers (the ability to name committee chairs, and to pass a number of measures through a cabinet-like Executive Council), he quickly alienated enough city council votes that council was able to consistently obtain the 2/3rds majority needed to veto his agenda.

Had Rob Ford followed O’Brien’s trajectory to the letter, he would have apologized to council around the second year of his mandate, promising to work more constructively with the other elected members. His mayoralty would likely have continued to sputter, and he would likely lose to a centrist or centre-left candidate in the next election, obtaining just 24.1% of the vote to the victor’s 48.7%.

But here’s where O’Brien and Ford’s trajectories part company. Two years into his mayoralty, Larry O’Brien apologized to Ottawa residents. He would later say:

“People believe and recognize that the first two years of my mayoralty were a complete — and quite frankly, self-diagnosed as a complete — disaster. I probably made every single major political mistake that was possible. … I think I even made quite a few mistakes that, quite frankly, were impossible to replicate… I just want to tell the citizens of Ottawa that I am sincerely sorry for the first two years. I completely regret some of my decisions and some of my actions.”

Can you imagine those words coming out of Rob Ford’s mouth? I bet you can’t.

(Update: Since I composed this article, but before I posted it, Rob Ford has appeared on his radio show and made a rather vague apology for the “mistakes” he has made. He did not specify what those mistakes were, but he’s sorry for them, and hopefully they won’t happen again. Very interesting. I wonder if this is a suitable parallel to Larry O’Brien’s apology from the second year of his mayoralty. Column continues…)

Because if there is a defining characteristic of Ford it’s that he doesn’t know how to back off and say that he’s wrong. It’s this very element which caused him to lose the TTC file. Whether he believes that he can do no wrong, or whether he believes that he shows weakness by admitting he’s done wrong, he will refuse to admit that he’s wrong. As a result, he has said that the Scarborough LRT proposal was no different than building raised streetcar rights of way on St. Clair Avenue, even after it was shown to him that Scarborough LRT would be completely grade separated and thus not much different than a subway. By continuing with this fallacy, he’s either lying or he’s delusional.

And five months ago, if he had admitted that he might have had a substance abuse problem, and that there might have been a video showing this fact, he might (just might) have gotten enough sympathy, and given himself enough time to rehabilitate his image to have a decent chance of contesting the next election. Instead, he is caught in a lie, and most everyone knows it. And most everyone around the world is laughing at him and Toronto for it.

But to Ford and O’Brien, they were elected on a platform of shaking up city hall — the same Tea Party approach of no compromise, no surrender and no retreat that has rendered reasonable political discourse in many political arenas into utter shambles. The difference between O’Brien and Ford is that O’Brien at least had enough self-knowledge and humility to pull back and admit mistakes. Ford seems to rejoice in ignoring them. (Update, see my update above.)

History does not repeat itself, but it does rhyme. The same factors that put Larry O’Brien into office in Ottawa put Ford into office in Toronto. Ford’s flame-out has only been more spectacular by degree. And before Calgary gets too smug, it should be noted that they, perhaps, are in the middle of their David Miller phase of the mayoralty. By the end of Mayor Nenshi’s second term, that eight-year-itch may well be scratching. His enemies are already gathering. One wonders what sort of mayor they might get in 2017.