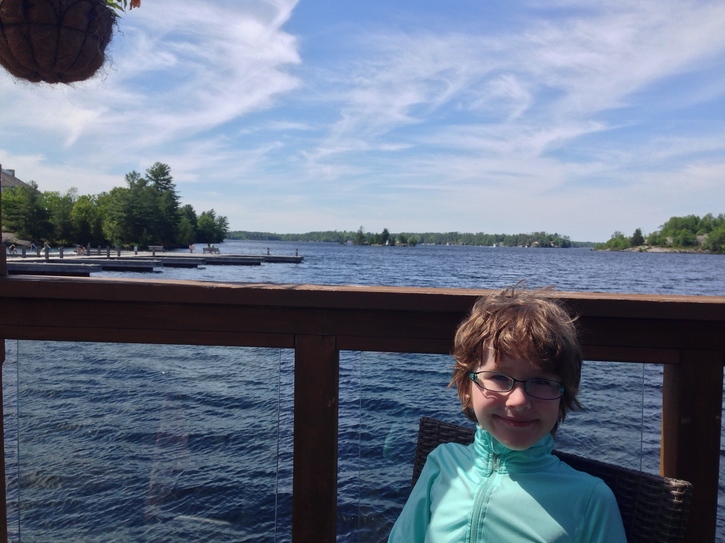 On Tuesday, Erin went up to cottage country for a miniature writing retreat. On Friday, I took the kids up to collect her, and then stay overnight in Bracebridge and see the sights. We went up to the Torrance Barrens Dark Sky Preserve, but unfortunately the half moon was bright enough to blot out many of the stars in the sky. Still, it was a pleasant trip.

On Saturday morning, we were eating breakfast on an outdoor patio overlooking Lake Muskoka, and the kids were being their normal exuberant selves. I didn’t think what the people at the other tables heard or thought, until near the end of the meal, one elderly gentleman stood up from the table next to us. He paid his bill, then leaned in with a smile and said (and this is a direct quote): “which one of you two is the better one?” He then tossed down a purple lollipop on the table. “Why don’t you two fight over it?”

And then he left. Possibly in a hurry, if he knew what exactly he had done. If he had charged away, shouting, “Fire in the hold!”, it would have been perfectly appropriate. Because Nora immediately snatched the purple lollipop, and Vivian almost immediately shouted, “Awww! No fair!”

What followed was a mammoth negotiation session. Could Nora share the lollipop? Could Vivian let Nora have the lollipop. Vivian was glaring at the unfairness of it all and Nora was gloating. It was destined for tears when the waitress (who, believe me, earned an extra large tip for being so on the ball) immediately darted forward and plunked another lollipop on the table.

Just one problem: it was orange.

Vivian swiped this lollipop, and Nora, who was perfectly happy with her purple lollipop a half-second ago, became desperately offended over the fact that her sister now had an orange lollipop, and she was left with just purple. Negotiations resumed. Mostly, it involved Erin saying “But, Nora! You remember, not two seconds ago, how happy you were to be holding that lollipop? Well, sweetheart, that lollipop is still the same!” and Nora replying with “Oh, damn you and your philosophical logic!” Or, rather, Nora’s equivalent, “Awwwwwwwwww!” (pouts lip). It didn’t help that, now, Vivian was gloating. Shaking her hips gloating. And this would have continued to tears if the waitress hadn’t returned with two more lollipops: one orange, and one purple.

And thus the peace was restored.

And the elderly gentleman who lobbed the lollipop grenade onto our table, I can only say: “thanks”.