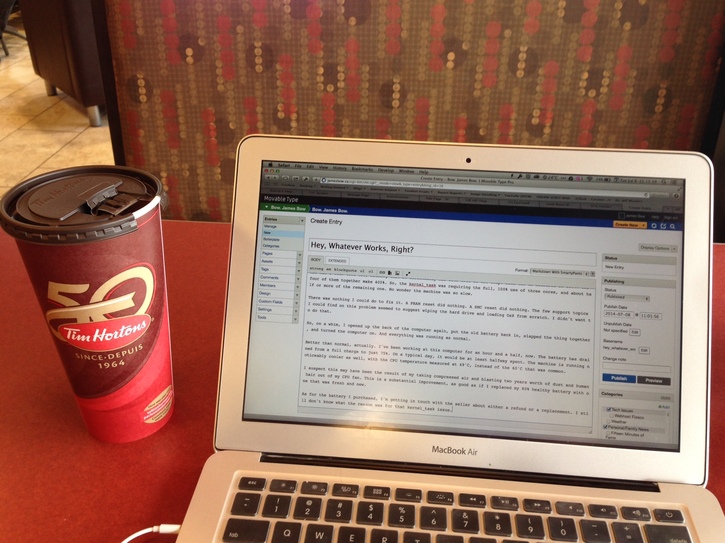 For a little while, now, I’ve been a bit jealous of Erin’s machine. We both own Macbook Airs, but her’s is a 2013 model, and mine is a refurbished one dating from 2011. They’re virtually identical, except that Erin’s is smaller, but the big difference comes in the form of battery life. Erin’s laptop can last a whole day without recharging, it seems. For a writer who likes to do a lot of work in coffee shops, that’s gold.

My machine, being older, doesn’t have the latest technology to make more efficient use of my battery. More than that, I figured that the age of the machine meant that the battery was old, too, and less able to hold a charge. I could typically go just three hours before I needed to plug the thing in, which was frustrating when you’re writing at a Tim Horton’s where power outlets are few and far between.

The thing is, my battery is still functioning as my warranty says it should. If I were to get a new battery from Apple, the purchase would set me back over $150. But the batteries are one of the few things that a moderately tech-savvy user could replace. And I could buy a fresh and new one off eBay for $60. So, I decided to make the purchase. The new battery arrived in the mail yesterday.

I’m a tinkerer, so I was quite happy to haul out my set of torn screws, tackle more than a dozen little screws in the back of my machine, and lift out my old battery. I even took a can of compressed air and blew out two years of accumulated dust that was coating my computer’s fan. I slotted the new battery into place, screwed everything back together, and turned the machine on.

What happened next was rather alarming. My computer booted up, but it booted up slow. I mean, really slow. Microsoft Windows Millennium Edition slow. And when I looked up what was choking my CPU, I got a big surprise: the kernal_task procedure was eating up 340% of my cpu.

If you’re not a Mac user, you may be wondering how this is possible. Well, if I have this right, the 2011 Macbook Air has a four-core CPU, meaning that it essentially has four CPUs in one chip. Each one is measured at 100%. The four of them together make 400%. So, the kernal_task was requiring the full, 100% use of three cores, and about half or more of the remaining one. No wonder the machine was so slow (though, strangely enough, my CPU wasn’t going hot enough to boil water, and the fan wasn’t revving up like a 747).

There was nothing I could do to fix it. A PRAM reset did nothing. A SMC reset did nothing. The few support topics I could find on this problem seemed to suggest wiping the hard drive and loading OsX from scratch. I didn’t want to do that.

So, on a whim, I opened up the back of the computer again, put the old battery back in, slapped the thing together, and turned the computer on. And everything was running as normal.

Better than normal, actually. I’ve been working at this computer for an hour and a half, now. The battery has drained from a full charge to just 75%. It is promising me another three and a half hours of work. On a typical day, it would be at least halfway spent. The machine is running noticeably cooler as well, with the CPU temperature measured at 49’C, instead of the 60’C that was common.

I suspect this may have been the result of my taking compressed air and blasting two years worth of dust and human hair out of my CPU fan. This is a substantial improvement, as good as if I replaced my 80% healthy battery with one that was fresh and new.

As for the battery I purchased, I’m getting in touch with the seller about either a refund or a replacement. I still don’t know what the reason was for that kernel_task issue.