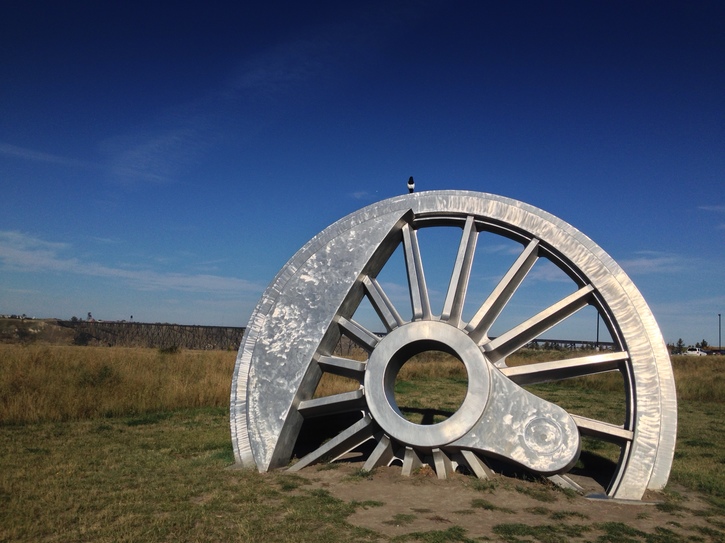 Monday was a travel day, as we left Lethbridge and headed back to Calgary, but we didn’t hit the road right away. Instead, we checked out the coulee behind the Lethbridge Lodge, and found ourselves on a trail to Fort Whoop-Up.

The current Fort Whoop-Up is an “authentic recreation” of the original “whiskey fort” that was set up on or near the site in the mid 1870s by Montana traders. The fort traded with the local Blackfoot nation, exchanging guns, gear, blankets and whiskey for the furs the Blackfoot brought in. The Northwest Mounted Police intervened in the early 1880s to bring the fort under Canadian control, but it doesn’t specify if they ended the practise of trading whiskey for furs.

The fort itself is a remarkable recreation, with a lot of time, effort and thought put into the whole place. There is a firearms museum and a Blackfoot gallery, both with fascinating artifacts on display. The “period rooms” surrounding the fort looked like authentic recreations of the period activities of the trading post, made appropriately creepy through the use of mannequins, and audio providing sounds of people walking and muttering among themselves. It was a fascinating experience and a highlight of our day.

Today was a day of school visits for Erin, so I took the time to do some work, meet a friend for lunch (at the Holy Grill restaurant, which got some attention from the Food Network series, Hey, You’ve Gotta Eat Here), and tour Calgary’s LRT. Given the debate that has taken place in Toronto these past few years over the merits of the LRT, Torontonians of all political stripes should head over to Calgary to see what a true LRT has to offer. Because Calgary’s LRT system is, to all intents and purposes, a subway. Outside of the downtown, the LRT cars speed along grade-separated right-of-way, crossing streets with the help of railway crossing gates, clearly given priority over the surrounding automobile traffic. There are elevated sections, there are sections within the median of highways, and there are underground sections.

And yet the Calgary LRT has the flexibility to operate through downtown streets in relatively mixed traffic. They’ve taken over 7th Street as a dedicated transit mall, and the trains have clear priority over the traffic signals, and yet cross street traffic doesn’t appear to be significantly inconvenienced. The downtown section is frequent and free, and works very well as a people-mover, connecting workers with lunchtime appointments. The stations are a lot flashier than streetcar stops, but most aren’t nearly as intensive as a subway stop, and yet the system gets the job done.

Torontonians could certainly benefit from some proper LRTs in operation. Indeed, when the Eglinton Crosstown line opens, they’ll likely improve on what Calgary has to offer, as Toronto’s LRTs will be low-floor. To operate through the downtown on Seventh Street, Calgary’s high-floor LRTs have to line up with sidewalks that have been raised to at least three feet above the roadbed, a potential fall hazard, I’d wager (and one which Calgarians seem to have blithely learned to cope with). The transit mall in Calgary seems to work well, handling many pedestrians, without any detriment to the surrounding businesses (a different experience than what I remember from Ottawa’s Rideau transit mall). It strikes me that this would have been a good example to show for Toronto’s King Street, back when it was proposed to turn that street into a transit mall to free up space for the King Streetcar.

Tomorrow is another travel day, to Saskatoon via Drumheller. Looking forward to what these places have to offer.

Click here for further photos of our trek down into the Lethbridge coulee.

Click here for further photos of my Calgary LRT tour. 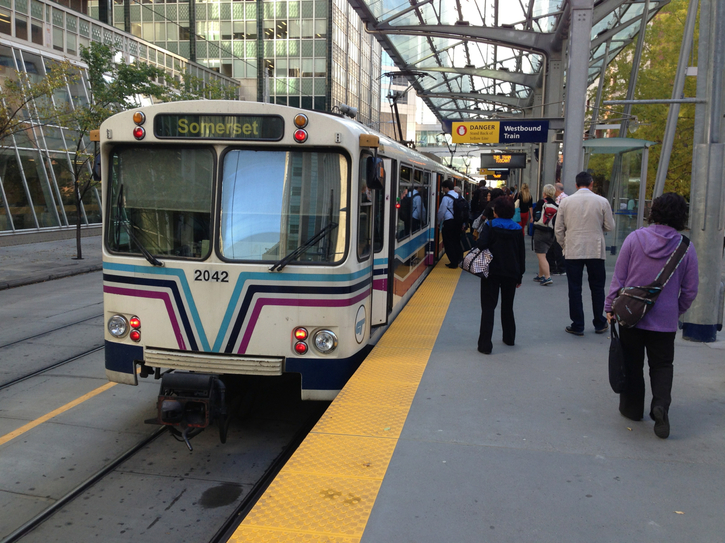