Soon after we arrived in San Francisco, we discovered that we had arrived in the city in time for Pride. Indeed, we learned that the Pride Parade was going to be steps away from the hotel. Erin resolved immediately that the kids and I should attend (she couldn’t, sadly, because she had to work that morning).

We figured it was an important thing to do. Being in San Francisco for Pride would be high up in many a person’s bucket list, but it was especially important to bring the kids there because it would have been unthinkable for us to be there ourselves when we were kids.

I have to admit that I was a little less enthused, but I did believe the kids could use the instruction on the importance of marching and being politically active. And once there, we had a good time. The vibe was just so joyous, especially in the wake of the successful Supreme Court decision making same-sex marriage legal across the United States. We’d intended to stick around for twenty minutes, but we stayed for an hour. A good chunk of that time was watching the Apple contingent clear the intersection (seriously, there were literally thousands of employees waving the flag. That company is huge). Vivian termed the parade “cool”!

Later that day, I learned that the Turkish government had attacked peaceful Pride marchers in Istanbul with riot police, tear gas and rubber projectiles. I know a Canadian Facebook friend who has a daughter caught in the thick of things. If nothing else illustrates the need for the Pride March, I don’t know what does.

I’m writing about this in more detail in my next column of The Kitchener Post.

Erin’s book promotion work ended Sunday at noon, and we celebrated by… collapsing in the hotel and falling asleep. But we did head out around supper time, too, dinner at Super Duper Burger (which had a lovely four-ounce “mini” burger that was just the right size and price for us), and caught a cab for the Golden Gate park, and the famous children’s playground, there.

The playground lived up to expectations, but we discovered that the Golden Gate park was 50 city blocks long. The idea of walking it to catch the sunset at Ocean Beach seemed somewhat… ambitious. But the playground was enough fun for the evening.

We also ended up making friends with the cab driver who took us from the hotel to the park (navigating some hefty diversions as a fair chunk of Market Street was still closed off to traffic, but the architecture we got to see en route was wonderful). When she set us down at an intersection that seemed somewhat lacking in traffic, we wondered aloud how we were going to hail a cab for the ride back, so she gave us her phone number and arranged a time to pick us up, which she did. When we wondered about how to get to Sausalito, where we were going to stay overnight on Monday, she quoted us a reasonable price, and sweetened the deal by promising to take us across the Golden Gate Bridge. We managed to stop for pictures. She also managed to take us on a brief tour of the Presidio.

Tonight, it’s a party and sleep on a tugboat. Tomorrow, we board Amtrak for the run to Fresno.

For more pictures of these two days of our trip, click here… 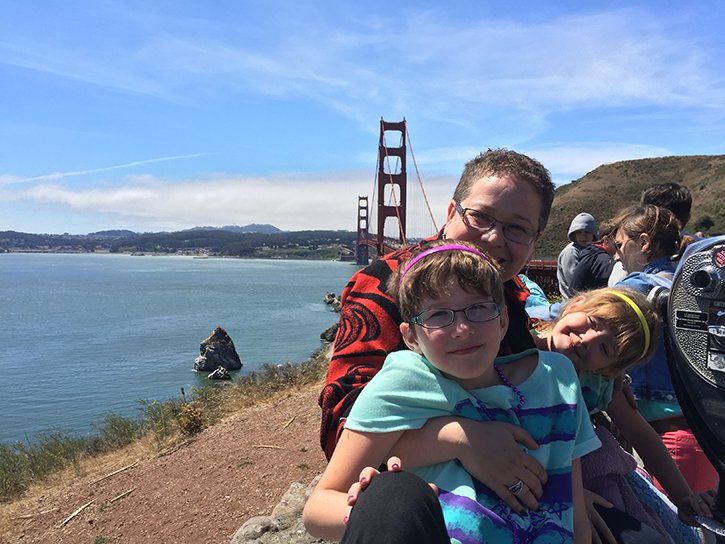