On Tom Mulcair's Proposed Exit from the Consortium Debates 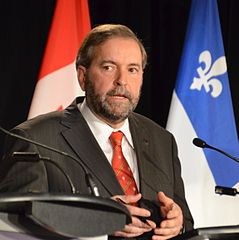 The CBC is reporting that New Democratic Party leader Thomas Mulcair is threatening to walk away from the Consortium debates, unless Prime Minister Stephen Harper walks back in.

For those who don’t know, who might not care (and that might be many of you), the “consortium” refers to the broadcast consortium that includes the CBC and major private Canadian networks, including CTV and Global. During an election, these television networks cooperate to stage a national election debate for the various party leaders, ensuring pretty much national coverage on prime time. In previous years, it’s the biggest opportunity for the party leaders to show themselves off to the voting public. Traditionally, these debates are the turning points of election campaigns, when the Canadian voting public gets serious about the coming vote.

But weeks ago, Stephen Harper begged off the Consortium debates, claiming that he’d been invited to too many other debates already. The other leaders rightly lambasted him for doing so, robbing millions of Canadians the opportunity to see how our sitting prime minister fares against the various challengers for his job. One could easily argue that it’s a cowardly move, and an undemocratic one, especially as all of Harper’s campaign appearances will apparently now be at “invitation-only” events.

Now that Mulcair is threatening to walk away as well, Liberals and Green supporters are lobbing the same attacks at him, but are these attacks accurate? I don’t think so.

The fact is, you can wallop Harper all you like for not showing up at the main election debate. You can call him a coward, or you can call him anti-democratic, but unless he changes his mind, he’s still not going to be there. And if he’s not there, then these Consortium debates are officially a waste of time. Anybody else who shows up at these debates is wasting people’s time. It would be bitterly ironic if Elizabeth May were the only party leader to show up at these debates in the end, but there you go.

If Harper isn’t there, then Mulcair does himself no favours by showing up, and neither do Trudeau or May. We can and should criticize Harper for breaking the format, but if it stays broken, let’s move on.

…and leave the mainstream media to mourn the death of their relevance.