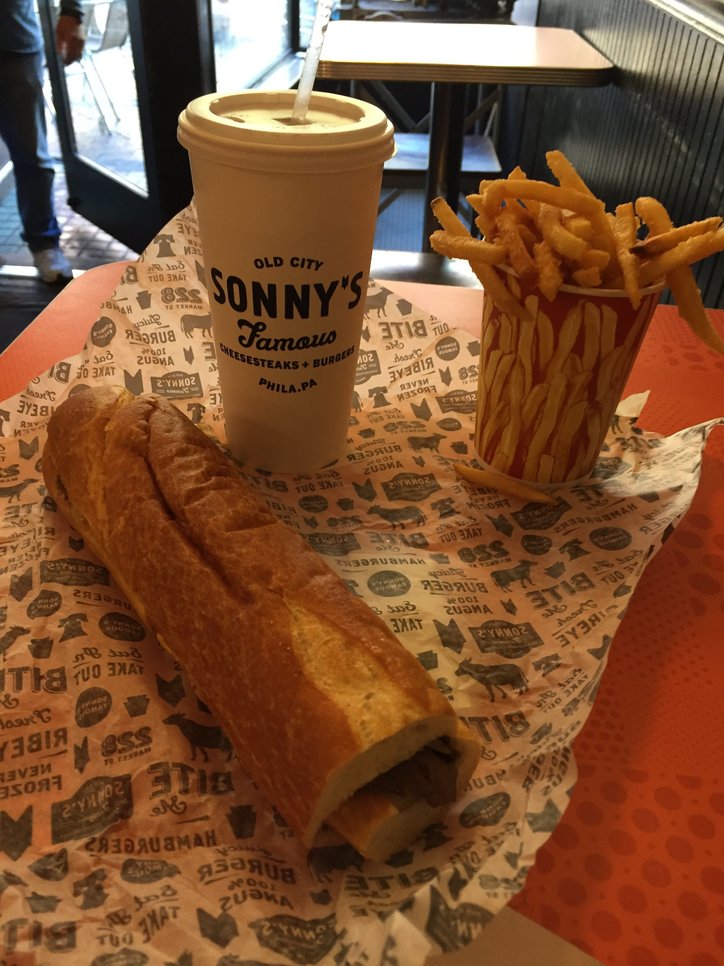 (Photographs of my Tuesday can be found here.)

Back in July, as Erin was getting ready for her month-long adventure to Mongolia, I decided that I wanted an adventure too. With Erin’s encouragement, I decided to go to Philadelphia for a couple of days.

There are two reasons I wanted to go: one, I’m a lover of sandwiches, and I’d been wanting to try a Philly cheesesteak in its native habitat. Two, Philadelphia had streetcars (they actually call them trolleys). Yes, Philadelphia also has this big bell, but I hear it’s cracked, so…

In all seriousness, I like exploring cities by transit, especially rail transit. You get to see the soul of the city, which isn’t usually found in the tourist hotspots. And a city that has a healthy transit system, in my opinion, is quite healthy.

Philadelphia intrigued me because, like Toronto, it has a remnant streetcar system that hung on by the skin of its teeth, and is now contributing to the city’s revival. It also has an extensive electrified commuter rail network — like what Metrolinx hopes to install in Toronto someday. So, with Erin’s blessing, I bought a plane ticket down, a train ticket back, and some hotel stays, and I took myself, my computer, one suitcase, and my phone camera.

I’m proud to say that I got to Philadelphia without once using a taxi. Transit improvements in Toronto, with Metrolinx and with Grand River Transit meant that I could take a GRT express bus to the GO station, a GO train to a UP Express station, and the UP Express to Pearson Airport. I arrived in time to check in and spend about a half hour going through customs and security, and still have an hour to spare at the gate. This is a significantly cheaper run from Kitchener than before, where Airways Transit could cost you upwards of $92, and long term parking can be over $90 a week. Instead, my fare was $3 on the GRT, $15.20 on GO, and about $11 on the UP Express - a third the cost of a dedicated taxi. Of course, I was lucky to have a flight that was scheduled at a reasonable time from the two inbound GO Trains (in my case, 11:40 a.m.). GO needs to establish more trains from Kitchener to become a viable service to connect with the airport.

I mention this because, leaving Philadelphia’s airport, I also caught a train. SEPTA (South East Pennsylvania Transportation Authority) has run an airport shuttle from its downtown commuter stations since April 28, 1985. A SEPTA commuter train serves four stops in the airport before heading downtown. The total trip takes around 20-25 minutes. The really neat thing is, SEPTA’s Airport Line is fully integrated with the rest of its regional commuter network. Unlike the premium UP Express train in Toronto, the fare to and from the airport in Philadelphia is just $8.

Philadelphia also has far better integration between its regional commuter service and its local transit — no surprise, since SEPTA runs both. I was able to purchase an “Independence Pass” on board my train from the Airport for $12. It’s good for unlimited travel over SEPTA’s buses, streetcars, subways and commuter rail for a whole day. There are many places where SEPTA’s commuter rail connects with local transit, and the pass just makes travel across the city seamless.

The arrangement of SEPTA’s downtown commuter stations are also interesting. Imagine if Toronto’s Union Station were three stations, in a line running through the middle of the downtown. Imagine all of the GO Train lines serving Union Station were interlined so that, as soon as they arrived and dropped off their passengers, they picked up more passengers and headed out. This arrangement creates a corridor of frequent commuter rail service through the downtown. It’s largely underground, but it doesn’t really act as a subway. It’s not really the sort of place where you can hop on and hop off. However, I guess it helps spread out the crowds entering Philadelphia’s downtown, giving commuters three opportunities to arrive close to their jobs. Philadelphia’s 30th Street station is the main station, and the one where Amtrak and other regional rail services stop. It’s a beautiful art-deco structure with a fantastic Great Hall.

I was also impressed by SEPTA’s subways. For one thing, they’re clean. That was a pleasant surprise after New York and Chicago (great cities with great subways that, unfortunately, are still quite dirty). There was no odour to them beyond creosote and brake dust, and there was very little litter. The tiles shone. SEPTA also wisely uses very bright lights in its stations, giving the system a much friendlier look. I know that SEPTA works at this because I also rode PATCO today.

Philadelphia has three subway lines. There’s the Market-Frankfort El (Blue line), and the Broad Street Subway along with its Ridge Avenue Spur (Orange Line). And then there is the Lindenwold High Speed line (Red). This line runs from Philadelphia’s downtown east across the Delaware River into Camden, New Jersey. As it’s not an exclusive Pennsylvania concern, the service is operated by the Port Authority Transportation Company, which is ironic because the core of the three subways were built at roughly the same time, and they used to connect with each other. You can transfer from the Broad-Ridge spur and the Market-Frankfort El to the PATCO line at 8th and Market, but you pay a separate fare.

Stepping into the PATCO station, I immediately saw the difference. The station was darker and grungier, and there was a definite odour of urine in the air. The train was packed, though, and as the line headed out into New Jersey, the parking lots beside all the stations were full.

For all of the things that SEPTA has over the TTC and Metrolinx, there are a number of oddities about Philadelphia’s system. Metrolinx may be dragging the TTC kicking and screaming into the smart-card age, but SEPTA checked and collected fares using roaming conductors. People paid cash, and the conductor took a hole punch to a piece of paper and passed over the receipt. My day pass is a simple piece of plastic with holes punched out of it. Even PATCO uses electronic fare media.

And the other holdover from SEPTA’s past is the streetcars themselves — something for which I am grateful. The network that exists now likely survived because the group of lines that serve west Philadelphia all come together into a subway tunnel that operates alongside the Market-Frankfort line and actually serves local stops while the Market-Frankfort operates express. They’re fast and frequent and not hampered by downtown traffic.

Leaving the tunnel, however, these trolleys are Rob Ford’s nightmare. These cars operate in mixed traffic all the way, even on streets where cars are allowed to park on the curb. And yet we still made good time. And the streetcars were full. The cars themselves are built by Kawasaki in Japan, not UTDC in Ontario, but they feel very much like Toronto’s CLRVs. As Toronto moves on to its new generation of streetcars, Philadelphia may become one of the last cities to operate streetcars with trolley poles instead of pantographs — possibly even the last city.

However, you can see that Philadelphia is struggling in places. I passed two abandoned subway stations during my travels today (Franklin Square, which still has antique tiles from the 1940s, and Spring Hill, which was closed in 1991). Half of Philadelphia’s streetcar network disappeared in the early 1990s, and only a single line has been restored. Two years ago, SEPTA had to threaten apocalyptic closures of three quarters of its rail and transit network unless Pennsylvania provided emergency funds to repair bridges and maintain tracks (fortunately that funding came through). And you can see that income inequality is a difficult issue in Philadelphia. Some of the neighbourhoods I rode through were somewhat down on their heels, and I saw whole blocks of abandoned and semi-demolished houses from the PATCO train in Camden.

Still, it’s been a very nice city and a very friendly trip. One SEPTA worker even noticed me taking pictures of the trolleys and came over to chat. He talked about some of the railfans he’d met, and the charters they’d organized, bringing in people from all over, including Toronto, Canada. He was proud of the system, and promised that more work was underway to make things even better. 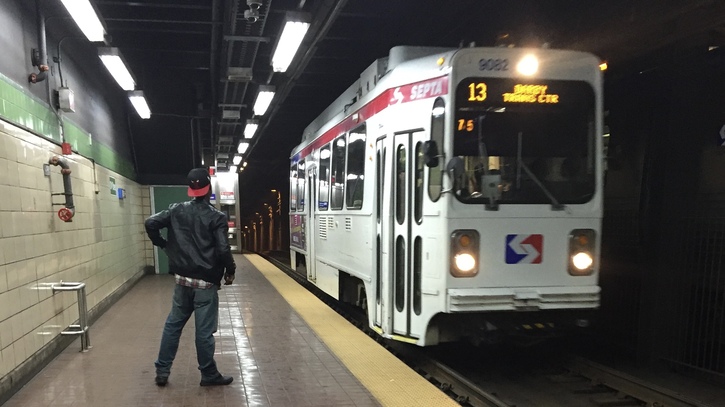