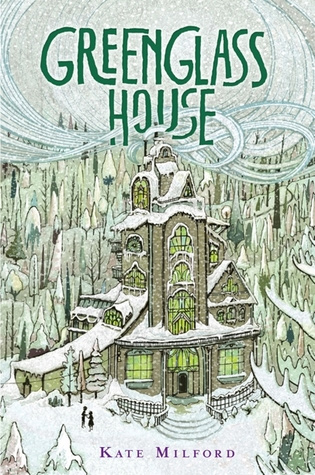 My drive to read more books has brought me to Kate Milford’s The Greenglass House.

Milo’s life is nothing if not interesting. He is a twelve-year-old Chinese young man adopted by a young couple in the northern U.S. mountain town of Nagspeake. The couple own an ancient and venerable hotel, laden with history, full of architectural quirks, including a self-propelled cable-car to a nearby river jetty, old forests and statuary, and more stained glass than you could shake a stick at. The hotel has played host to famous and infamous robbers and smugglers of the Robin Hood variety, and would likely be prominently listed in such tourist literature with frequent mentions of secret lairs, prohibition, rum runners, and whathaveyou.

It seems odd, then, that Milo is initially portrayed as a somewhat excitable young man who doesn’t like his routine disrupted. However, that’s what happens. Just as Milo and his parents settle in for a Christmas holiday with no guests in the hotel whatsoever (clearly Nagspeake’s tourist season is in the summer, and Milo’s adoptive parents do well enough during the high season not to worry about a disastrous lack of clientele during the winter months. Wherever Nagspeake is, it’s clearly not near the ski chalets of Vermont), not one, not two, not four, but five guests show up at the door, no reservations between them.

Not only is the sudden influx of guests a shock (which Milo’s parents deal with by calling in help; fortunately, help is available in the form of an older woman and her granddaughter, a twelve-year-old girl named Meddy), but it’s clear that all of these people are here for some purpose other than sight-seeing. There is the surly, grim-faced Mr. Verge. There’s Clem and Georgie, two women — possibly competing cat-burglars — that the author helpfully lets us tell apart by dying their hair vibrant colours, red in Clem’s case, blue in Georgie’s. There’s the bickering Mrs. Hereward and Mr. Gowervine.

All of them have a story to tell, and as the weather gets bad and the lights go out, all of them get a chance to tell their story, which conveniently relates to the reasons they are all here. And, of course, nobody is quite as they seem, and everyone has their own agenda. But for one of the guests, that agenda involves more sinister actions, including sneaking into rooms and robbing.

What is everybody here for? Why now, of all times? Meddy convinces a reluctant Milo to investigate, taking on personas from her beloved role-playing games. Such a move, however, is not without its risks.

Such is the premise of Kate Milford’s third novel, The Greenglass House. I’ve been a big fan of Kate’s work, including her home-run debut novel, The Boneshaker. It and her follow-up novel, The Broken Lands, had a wonderful, almost lyrical quality, centred around historic, diverse communities, fantastical threats, and just a plain love of storytelling. The Boneshaker starts out slow, but grabbed my heart when the characters took a moment to tell a possibly-true story about old Tom Guyot beating the Devil by playing the guitar. The Broken Lands takes us to Brooklyn on the eve of the opening of the Brooklyn Bridge and tells a story about the spiritual founding of New York against supernatural forces that would pervert the city.

The Greenglass House is something of a departure for Milford, as the story is set in the present day — or possibly a few years back from it (none of the characters have cellphones, but there are references to role-playing games). The book maintains a lot of the feel of the previous two stories, however, with an isolated setting that’s slightly in this world, but also has the feel of some fantastical elements. The lead characters are also well drawn. It’s good seeing Milo rise above his drawn-in, compulsive self and do some serious investigating. And whereas The Boneshaker and The Broken Lands each stop the narrative briefly for a character to tell a fascinating story, Milford does it five times in The Greenglass House as each of the quirky characters gets a turn.

Truth to tell, The Greenglass House is not my favourite of Milford’s works, because the narrative is slow to move with all of these stories being told. I may also simply prefer the more YA elements of The Broken Lands, especially the romance, which isn’t really in play here. However, The Greenglass House has its moments, especially near the end as we learn some genuinely surprising things from some unexpected quarters. I think this book will really appeal to middle-grade readers who like a good story (and get several), and many will appreciate the strength and growth of Milo’s character throughout.

All-in-all, a solid effort from Milford’s part, and one that I recommend.