The Day in Denver 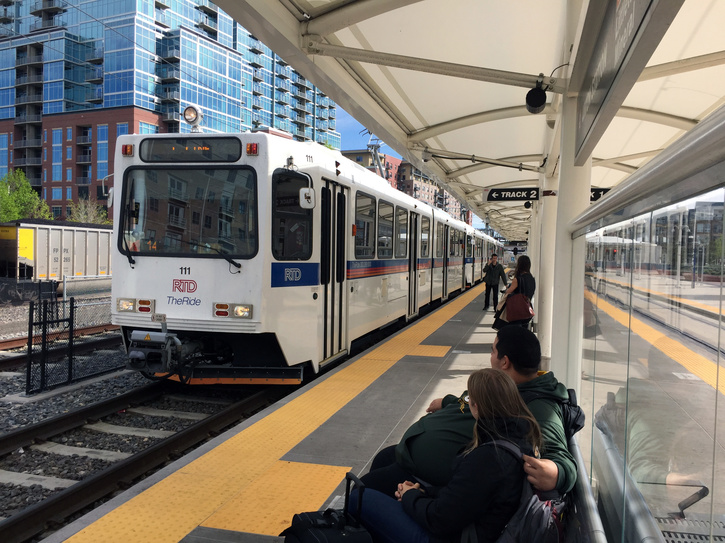 Denver has spent a lot of effort and money into revitalizing its downtown, and creating a city that is more pedestrian friendly and less reliant on the automobile. Denver’s first LRT line was opened in 1994, with an 8.5 km section from its downtown to the I-25 at Broadway. Since then, it has turned one of its downtown streets (16th) into a pedestrian and transit mall, and added to its LRT network, creating a five-line system that stretches 76 kilometers and operates over 170 light rail vehicles.

Portland, by comparison, has over 97 kilometers of light rail track, plus 11.83 kilometers of track for its downtown streetcars. However, Portland opened its first LRT in 1986, and Denver is rushing to catch up. In 2004, Denver voters approved a measure that raised sales taxes by 0.4% to embark on a plan called FastTracks. While this plan has not gone without hiccups, key components of the plan came to pass in 2016, starting with the beginnings of a regional network of electric commuter trains, and continuing with more extensions to its LRT>

I had to check it out, so I added another day to my Denver visit, and spent it touring the system.

Amtrak deposited me at Denver Union Station on-time at 7:15 a.m. and I headed into Union Station for breakfast. The building has been lovingly restored and upgraded to serve as a renewed transportation hub, and it’s acting as the focal point for redevelopment in the northern part of Denver’s downtown. Even early in the morning, people were strolling or having breakfast. There was a street-café vibe to the whole area, and lots of comings and goings.

Although three LRT lines terminate at “Union Station”, their station happens to be a couple of blocks from the original train station where Amtrak and the commuter trains meet. The two hubs are connected by a long tunnel which also serves as an underground bus terminal. Another feature of FastTracks was the installation of new regional express bus routes linking the city to surrounding towns and centres.

I took the LRT out to Golden to see the Colorado Railroad Museum. Unfortunately, once there, I found that while Denver might have an excellent LRT, public transit in the neighbouring town of Golden left a little to be desired. There was no bus connection for a route that would take 11 minutes to drive, but over an hour to walk. I eventually called a taxi. But Golden is a beautiful town in its own right, boasting mountain views, and the largest brewery I’d ever seen (It’s Coors’ headquarters).

It’s amazing how quickly the topology changes, here. Half of Colorado is a flat state (although it ramps up from the Kansas border. The elevation there is around 4,000 feet whereas Denver…? They don’t call it “mile-high stadium” for nothing), and you don’t think of that when you remember how much of a claim Colorado has on the Rockies. That transition happens within the Denver metropolitan area. The east side of town is quite flat, but by the time you get to Golden, you’re seeing high hills with rugged peaks, and that’s only the start. The area immediately to the west is called the “Front Range”. Things get way more mountainous afterward. It’s strange that mountains should have such a firm boundary.

Overall, I was impressed by the LRT, and by the new commuter train serving the Airport. The commuter train makes the trip in 37 minutes, travels faster than cars on the parallel Interstate, and the fare is only $5.75. It all seems to be well used as well. Three-car LRT trains are seen during rush hours and they’re full. Even the new commuter train, though it travels through vast swaths of nothing, was busy from the airport, and saw passengers getting on and off at its intermediate stations. The system seems as convenient to use as Philadelphia’s regional rail lines — and indeed, the same (newest) equipment is being used. More lines are planned, and honestly Philadelphia is a good model to emulate (and update).

I also took the time to stroll downtown. The place was pretty busy, with full shops and restaurants. There were, however, empty lots to remind people of what Denver is working so hard to revitalize from. However, it’s clear to me that Denver has taken the matter of revitalization and improving public transportation seriously. They were willing to raise taxes to do it, as well, and that’s a lesson that Toronto and Ontario should be paying attention to.

Also this evening, after a dinner at a restaurant featured on Food Television’s Drive-ins, Diners and Dives, I stopped by a theatre and saw Captain America 3. That is such a good movie, although the Marvel Cinematic Universe is so complicated and convoluted, I wonder how anybody new to the series is going to cope (answer: they’ll watch Doctor Strange instead). This is how you get superheroes to fight (take note Batman vs. Superman): you give everybody equal time, you lay out the stakes, you play to the characters’ strengths and their flaws, and you don’t treat your audience like idiots. There’s some wonderful action here, and the movie will have an impact on many that will follow. One wonders how the Marvel Cinematic Universe is going to keep up with all this continuity. It might need a reboot at some point.

Anyway, that was my day. Tomorrow, I head out of the city to see some mountains.

P.S: My Flickr album of the day can be found here…