In the Far Dark
(A Draft Sun Runners Excerpt) 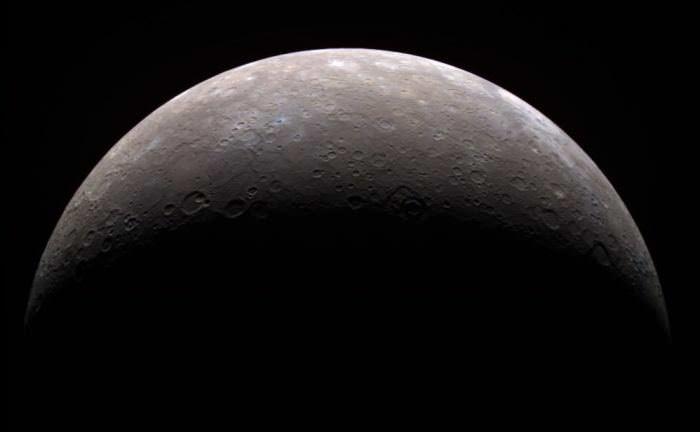 The image above is courtesy NASA/JPL.

Last month, before a bunch of deadlines ambushed me (strange how they do that, even when you're expecting them), I managed to add a few thousand words to The Sun Runners after a long period of dormancy, and pushed the manuscript above 60,000 words. It feels good to be thinking about fiction again after so long. This past year hasn't been a good one thing for me in terms of creative energy, and that is not a surprise, frankly. It may be ambitious, but I hope to write "The End" for this draft of The Sun Runners by the end of this year. And then it's time to go back to the beginning and write the whole thing again. It's been a good draft, but it's still a draft. It needs work.

The story is now split between two protagonists standing astride a difficult period in the history of the Mercury colony. We have young Frieda, the Crown Princess of the latitude-town known as the Messenger, on the moment when the Earth wakes up from "the Silence" and sends a message asking to meet with the leadership of Mercury. We also have her grandmother Adelheid, currently the dowager regent who doesn't trust the Earth one jot, and we see her fifty years earlier, at the moment when the Earth went silent due to environmental and economic collapse, cutting off and isolating its space colonies. With the Mercury colonies far from self-sufficient, this means a very bad time for the people there.

In this section below, we see military officer Adelheid who has, practically against her will, risen to the level of command as the situation deteriorates around her following the Earth's collapse. Here, after the Messenger has pulled across the dark of Mercury close to the dusk line in order to have time to make repairs, she has managed to wrest some stability for her latitude-town, but she's made some hard choices, and is not feeling in the mood to celebrate, even if back on Earth, it's New Year's Eve, 2312.

She glanced up, and saw Felix standing at the doorway in the dim light. She smiled. It was unfamiliar enough a feeling that she marvelled at it. "Yes, Felix?"

He stepped forward, hands behind his back. "Apparently, the repairs are complete."

Adelheid straightened up. How long have I been working here? "Already?"

"A little early, as it turns out," Felix replied. "We had some lucky breaks to get the repairs done quicker."

Felix smiled. Then he brought out his hands. One held an envelope, which he held out to her. "And, in other news, I apparently have to call you Colonel, now."

Her brow furrowed. "What?" She snatched the envelope and opened it.

"You've been promoted." He took a step back and watched. "We all have."

"The civilian council made the decision," Felix replied.

"We haven't got a civilian council anymore," Adelheid snapped.

Felix picked up the paper and glanced at the signature. "We do have assistant deputy clerk Meitner, apparently. Head of filing. That's as high up as the civilian leadership goes, I guess."

"We should do something about that," said Adelheid. "Call an election."

"When we have the time. In the meantime, he and the others at his level had a vote. They made the call."

Adelheid paused, then sighed. "I guess somebody has to."

She looked away. "Felix, stop it."

He sagged, and stood silently. Adelheid could almost feel his stare on her, but she said nothing. At the same time, she didn't order him to leave.

She heard Felix step back and pull something from his jacket. She hear the clink of two things being planted on the tabletop. By the time she turned, he'd unscrewed a small bottle and had poured out a clear liquid into two glasses.

"Alcohol ration," he replied to her questioning gaze. "For today."

"What day?" asked Adelheid. She looked up at the calendar, but she hadn't updated it.

"December 31, 2312." Felix checked his watch. "Twenty-three fifty-four Greenwich Mean Time, apparently. That explains the noise you may have heard outside."

Adelheid peered past him at the door, and listened hard. It took her a second, but over the purr of the Messenger, she finally heard it. The sounds of celebration.

"Happy New Year?" muttered Felix. He raised his ration shot of alcohol, looking for the possibility of a toast.

Adelheid sighed and took her glass. "They won't be saying it on Earth, you know. Assuming there's anyone there left to say it at all."

But Felix kept his hand out, glass held high. After a moment, Adelheid tapped her shot glass to Felix's. She slugged it back and wished there was another.

"Do you think we'll keep the Earth calendar?" she asked. "Measure everything in Earth Years when there's no-one there to keep time?"

"Maybe." Felix leaned back and looked up at the ceiling. "I don't like the idea of measuring things in Mercury Years. Too many New Year's festivals. I'm not really in the mood to celebrate."

"Neither am I." Adelheid put her face in her hands.

"But we have to celebrate," said Felix. "At least once an Earth year."

"Yeah." He stepped back and opened the door. The sound of celebration echoing through the corridors increased. "Because despite yesterday, we're here today. We've stabilized our rations. We've repaired the Messenger. We can hold out indefinitely. We can get through today, but we need something to get us to tomorrow."

She gave him a wry look. "Nice inspiring speech. How long did you take to think it up?"

"It's true, though." He took a deep breath, then looked her in the eye. "We're still here today. And we're going to be here tomorrow. So, let's celebrate that, at least. Celebrate... and remember." He stepped back a bit, indicating the door.

Adelheid sighed. Then she put the shot glass down and stood up.

This brought her close to Felix, and she hesitated. They stared at each other, and the silence lengthened. In it, Adelheid thought, Felix. Always been there. Looking on the bright side of things. Making me hope rather than fear. My best friend since we were in pre-vocational school. I'm so glad to have him here. My best friend.

She frowned. My best. Friend.

Felix looked away. He cleared his throat. "We should get going," he said. "I think the new Colonel should address her troops."

"Yeah," said Adelheid quickly. They turned at the same time for the door, and bumped shoulders. They stopped, staring.

Felix took a step back and let Adelheid lead the way.

They walked into the corridor, towards the sounds of celebration.