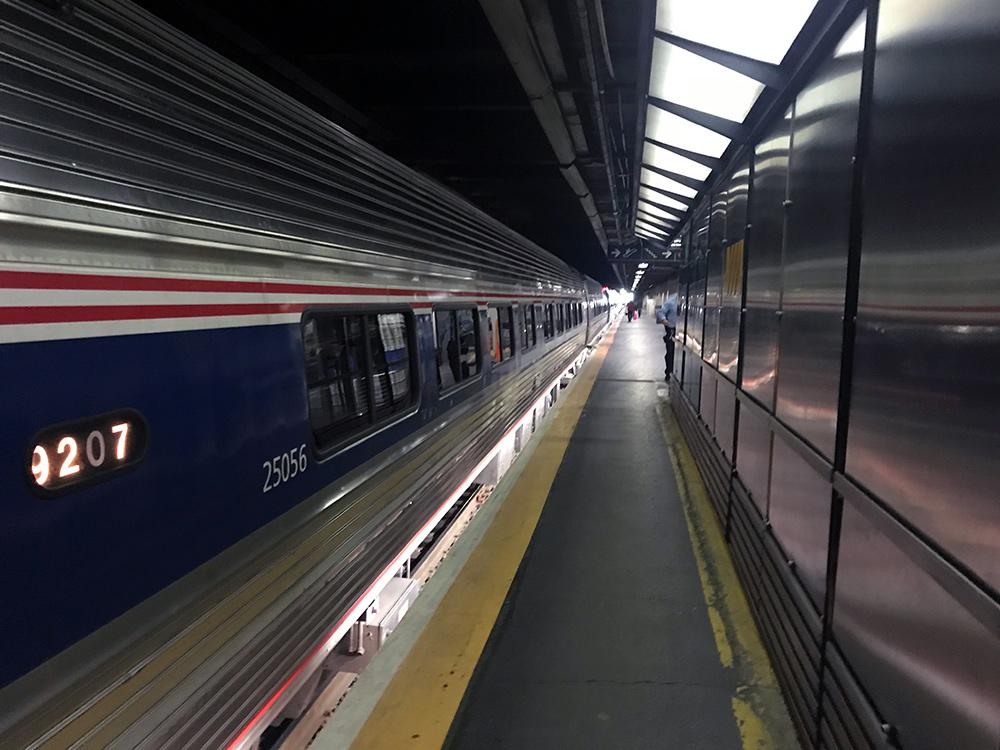 After spending a night on the town on Montreal’s Metro (yes, I know, but I also had smoked meat and poutine), I had a decent sleep in a very bare-bones hotel room with a comfortable bed. I got up early, took the Metro to Central Station and had breakfast and did some writing while I waited to board the Adirondack.

This tour will have some spectacular scenery, I’m told. The Cardinal is supposedly one of the most scenic Amtrak routes on the network, especially for east of the Mississippi, but the Adirondack between Montreal and New York is also listed as one of the most scenic. And, this I know to be true, having taken this route from Philadelphia to Montreal on October 2015, in time to catch the fall foliage.

The Adirondack travels alongside Lake Champlain through the Adirondack mountains. The scenery is rugged, and the rails hug the lake. Further south, the train follows the Hudson Valley into New York City. Both of these are some of the most beautiful things I’ve seen from the train, and I’ve been through the Rockies. I’m also impressed that the Adirondack is dirt cheap. A coach ticket (which is all they have) costs just $69 to go from Montreal to New York, with potential connections to any of the major cities on the Northeast Corridor. And there’s wi-fi (although it’s been pretty spotty, as I type this).

Today, I hope, will be a writing day as well as a travel day. I’m going to be about 10.5 hours in a train, with lots of leg room and a tray that puts my computer at the right height. I don’t want to lose this opportunity. We’ll see how it goes.

14:30: Currently about a half hour late, but nobody’s complaining. I can hear camera shutters going off in the car, as everybody takes pictures of Lake Champlain.

18:11: The border took 30 minutes longer than scheduled, but since then, we’ve been steadily making up for lost time, and are about to depart Albany on time for the run to Penn Station. The scenery thus far has been beautiful, and promises more beauty in the next couple of hours.

22:44: Have finally checked into my hotel near Newark Airport. The hotel shuttle was full. You know, if you get so many people checking in via your shuttle, guys, you should probably run your shuttle more often. But the place is clean and smoke free, and has decent wifi. It’s been a long day, but well worth it. The Sun Runners has now advanced by 1,300 words, 1,100 of them coming today.

My photos of this day can be found here.